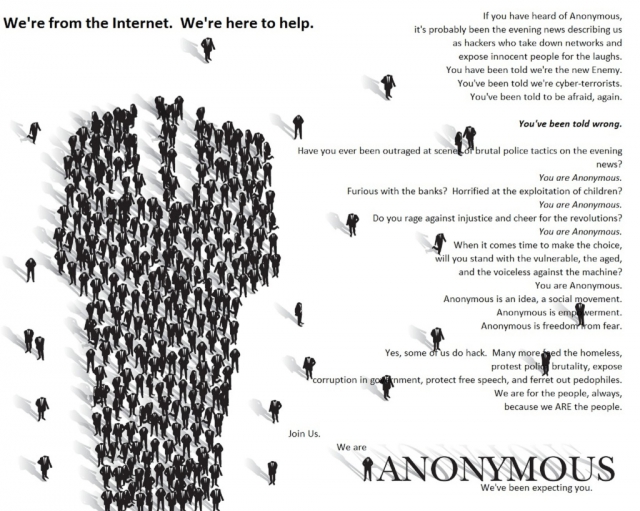 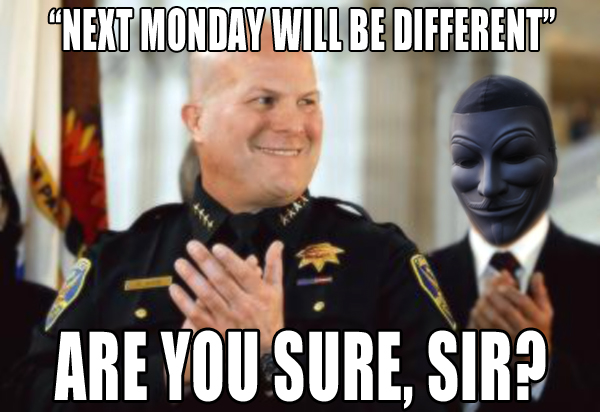 This is Anonymous, we until recently did not know who you were. We stumbled upon an article in which you have stated “I don’t want this to be construed as delivering a threat,” But shortly after you go on to make a threat: “It will be different next Monday,” This kind of statement is somewhat amusing because we have stated “We come in peace.”

Now you have our attention, We do not appreciate threats nor do we take well to them, especially from a chief of police who has a very interesting background himself. May we remind you of 2003? Allegedly conspiring to obstruct the investigation into the infamous Fajitagate affair, in which three off-duty cops allegedly beat up two men for their Mexican takeout. Or maybe we should ask Chief Heather Fong why she had to reprimanded you in 2009.

We do not forgive.

We do not forget.

§Protest Plan For OpBart-3
by anon Sunday Aug 28th, 2011 9:27 PM
Recently, a document surfaced detailing a plan for the third round of BART protests on August 29th. In it, a suggestion is raised to change the direction of the action: to focus on station closures—rather than police brutality of the BART PD—in an attempt to “shame” BART, or somehow outwit them with logic. The implication is that, once presented with a crowd of protesters bearing signs imploring them not to close stations, BART police will, for unspecified reasons, not attempt to blame closure of the stations on the massed crowd, nor close the stations at all.

This is incorrect and counterproductive, and further illustrates the main problem with OpBART: It is replete in revolutionary fervor, but severely lacking in focused ideology. Because of the decentralized nature of Anonymous, the operation finds itself swinging between causes almost at random, focusing attention on each new injustice, but at the expense of the original message.

Let us be perfectly clear: THE BART OPERATION AND THE PROTESTS SURROUNDING IT SHOULD BE FOCUSED ON THE CONTINUING BRUTALITY AND UNACCOUNTABILITY OF THE BAY AREA TRANSIT POLICE.

To muddy the water by presenting secondary and tertiary issues (such as cell disruption, and unwarranted station closures) as the primary goal of the movement is confusing to activists and the public. Though these issues are completely valid and deserving of address, they must take secondary roles in accordance with their overall importance.

The conduct of attendees to the protests has been similarly counterproductive - Impeding station function and shutting down Market Street does nothing but turn popular opinion against our cause and provide the police with an easy way to vilify us in the eyes of the public. Straying outside of the immediate area of BART stations also places us within the jurisdiction of the San Francisco Police Department—against whom we have NO IMMEDIATE ISSUE.

To this end, we propose the following guidelines for the third round of OpBART, scheduled for Monday, August 29th at 5:00 PM:

1. ASSEMBLE OUTSIDE CIVIC CENTER STATION, IN THE LARGE PLAZA SURROUNDING THE MAIN ENTRANCE. This in NO WAY impedes the function of the station itself, and ensures that the public cannot reasonably see us as “the protesters who kept me from getting home”. The BART police would have NO JUSTIFICATION for shutting down the station, and would be unable to reasonably blame us. Remember, they will be in control of the media narrative, and if they are able to say that we shut down the station, they will. To give BART any excuse whatsoever, is to shoot ourselves in the foot.

2. STAY THERE, STOP RANDOMLY MARCHING AROUND, AND PICK A TARGET. The area is highly visible, both to passengers and passersby. It places us within range of the institution with which we take issue. Marching up and down Market does not expose us significantly more than it would if we stayed put, and staying put again deprives the police and media of their “unreasonable protesters shut down civic infrastructure” monologue.

3. STAY ON MESSAGE. THE PROTESTS ARE ABOUT POLICE BRUTALITY FIRST, AND EVERYTHING ELSE SECOND. Leaping from topic to topic does nothing but confuse those not involved with the operation. The San Francisco Chronicle already has reporters saying that the third round of protests will be about station closures during the first two operations. We CANNOT ALLOW the media narrative to be twisted like this, and to leap from topic to topic based on whatever the newest injustice is does nothing but confuse potential allies and allow the police and media an easy out. The popular narrative already shifted to “hipsters mad about cell reception”, and we ABSOLUTELY MUST shift it back to the issue of POLICE BRUTALITY, and fast.

4. KNOW YOUR TARGETS. THE SFPD ARE NOT THE ENEMY RIGHT NOW. Our issue is with BART police, not the SFPD. Historically, the SFPD has been extremely accommodating to civil protest (see footage and reports from Operation Chanology, which had its biggest turnout in San Francisco), and to rail against them as though they were actually our targets is not productive. DO NOT CONFLATE THE SAN FRANCISCO POLICE DEPARTMENT WITH BART POLICE. The SFPD should not have to clean up the mess BART police created, and BART police should not get a free pass because the protest group wandered out of their jurisdiction.

Anonymous is participating in noble action, placing itself in opposition to police brutality and corruption. Its dedication to the cause of social change is commendable, but its decentralized nature makes it susceptible to derailment by distracting voices. Ideological inconsistency will ultimately do more harm than good, even if the conflicting voices are individually beneficial. To sway people to our cause we must win in the court of public opinion, and to conduct ourselves in such an erratic manner does little in this regard.