Add an Event
Newswire
Calendar
Features
Home
Donate
From the Open-Publishing Calendar
From the Open-Publishing Newswire
Indybay Feature
Publish to Newswire
Add an Event
Related Categories: San Francisco | Police State & Prisons
Anonymous OpBART-6 Protest - Of Fliers and Tails, 9/19/11: photos
by dave id
Tuesday Sep 20th, 2011 12:12 PM
Critics of BART have leafleted countless times in stations and on trains as a means of reaching out to riders about the problems of violence and lack of accountability within the BART police department. Anonymous' #OpBART-6 protest on September 19th -- while not of the numbers or splash of most previous Anonymous BART protests -- carried on in that tradition of activists committed for the long haul. BART did not bring out a large continent of its "Tactical Team" riot police to respond to demonstrators this time, but did have a small number of police on hand watching demonstrators as they handed out fliers in downtown San Francisco stations and trains. At least one SFPD officer was seen tagging along as well, and DHS officers were present at the Civic Center station. BART did have a contingent of green vested employees on platforms and riding trains in various directions. BART employees who have been specifically tasked with tailing No Justice No BART's Krystof both in stations and on the streets of San Francisco did not don their usual identifying green vests for this action. The tail followed all the way to Lake Merritt station during the action and for many blocks down Market Street after the action, until they were confronted by Krystof as to what they were doing. 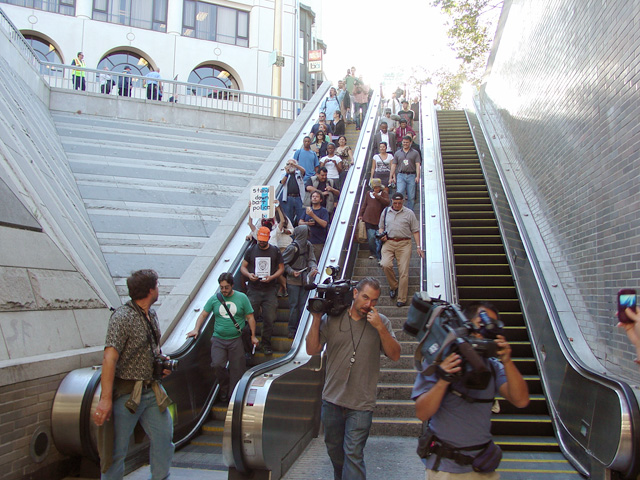 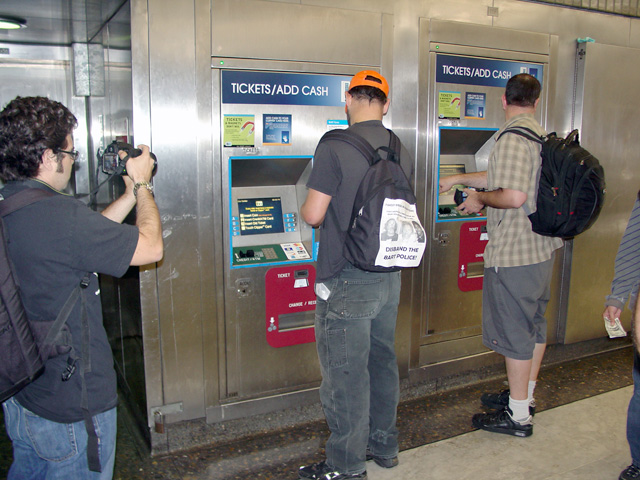 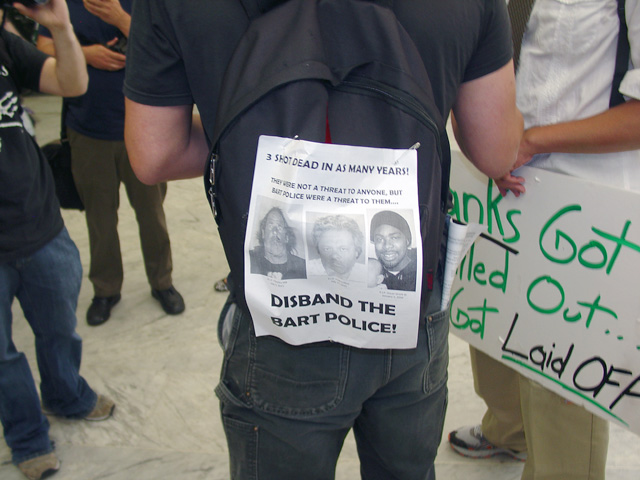 They were not a threat to anyone, but BART police were a threat to them... Disband the BART Police! 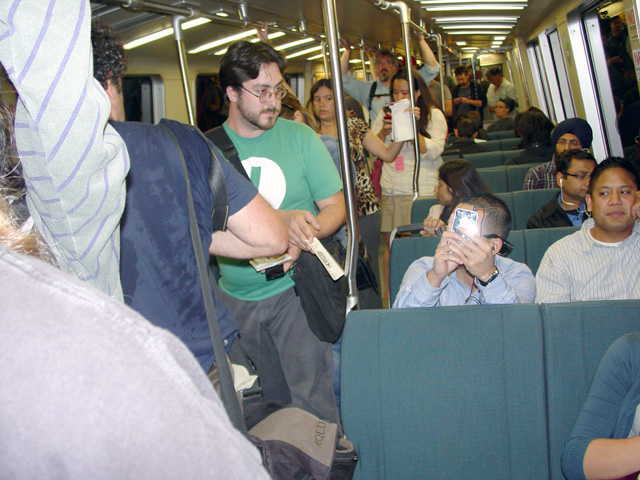 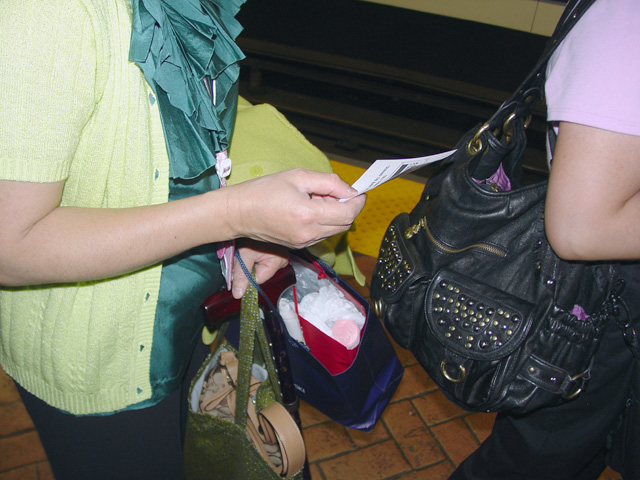 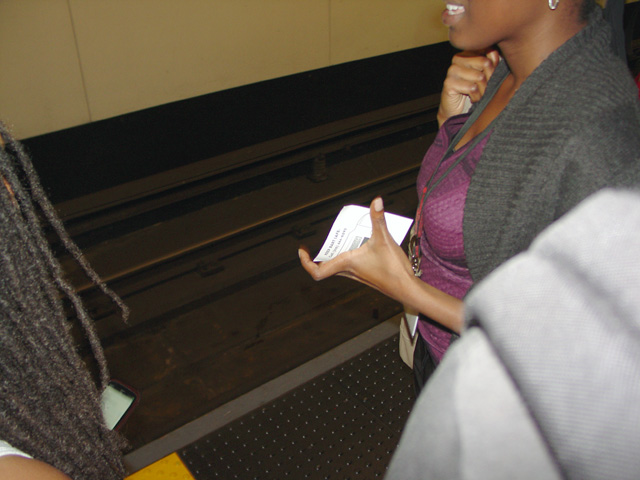 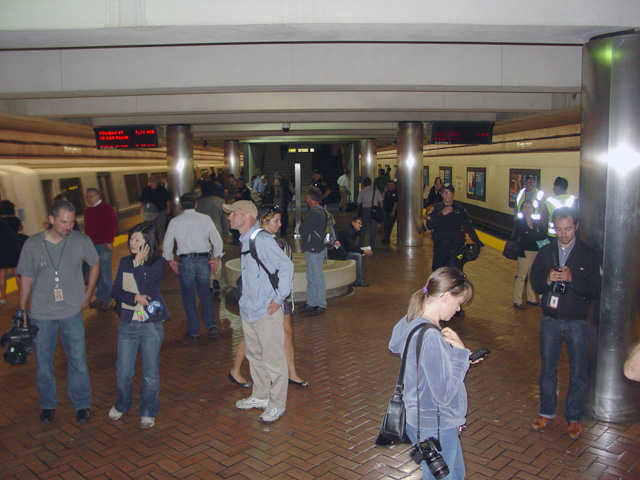 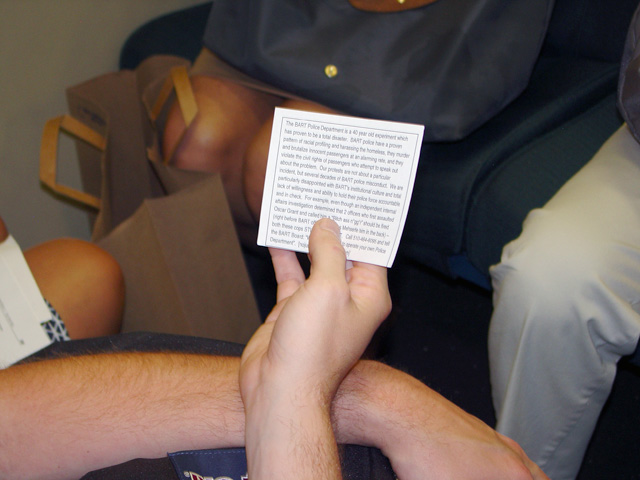 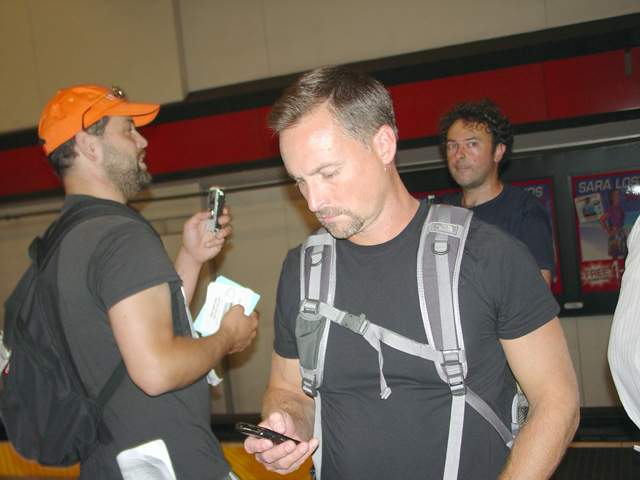 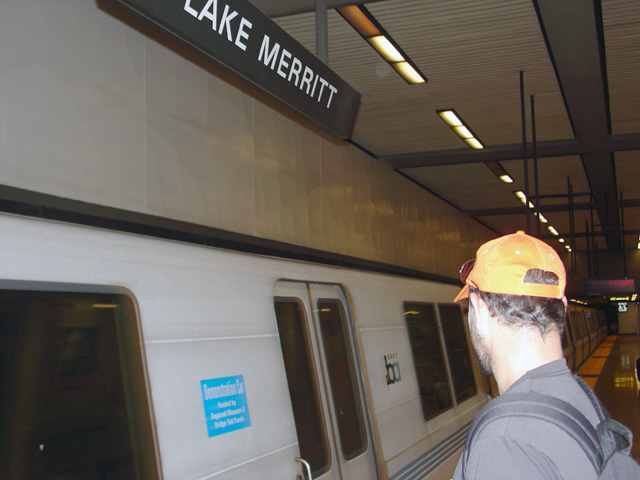 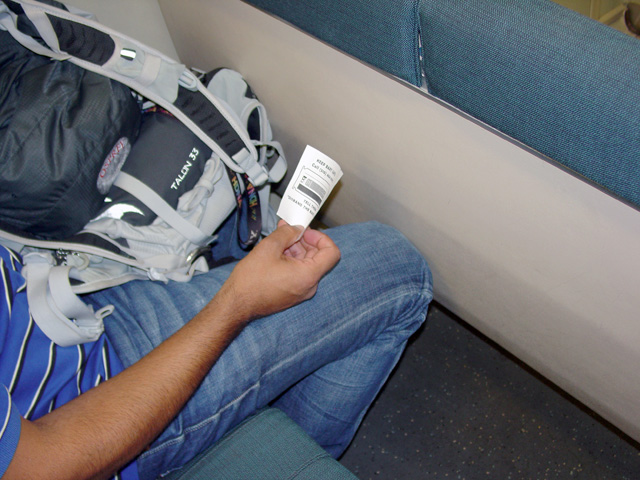 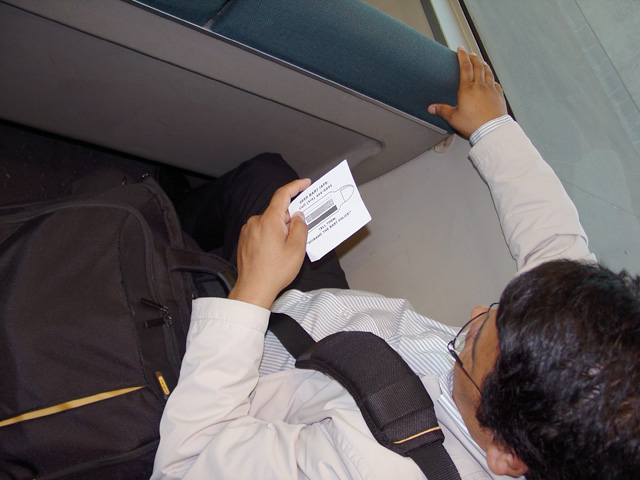 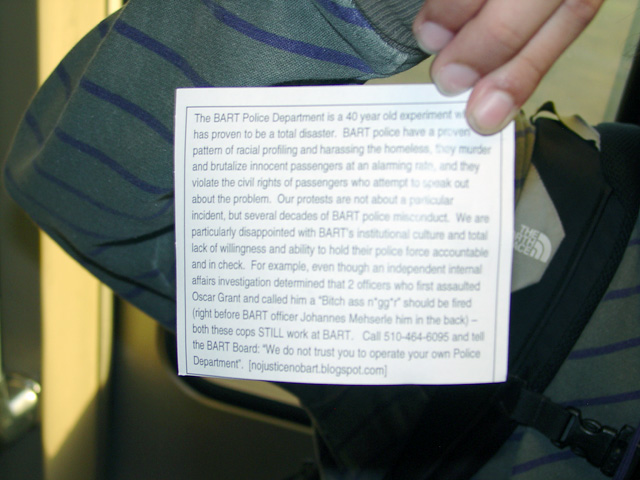 The BART Police Department is a 40 year old experiment which has proven to be a total disaster. BART police have a proven pattern of racial profiling and harassing the homeless, they murder and brutalize innocent passengers at an alarming rate, and they violate the civil rights of passengers who attempt to speak out about the problem. Our protests are not about a particular incident, but several decades of BART police misconduct. We are particularly disappointed with BART’s institutional culture and total lack of willingness and ability to hold their police force accountable and in check. For example, even though an independent internal affairs investigation determined that 2 officers who first assaulted Oscar Grant and called him a “Bitch ass n*gg*r” should be fired (right before BART officer Johannes Mehserle him in the back) – both these cops STILL work at BART. Call (510) 464-6095 and tell the BART Board and General Manager “We do not trust you to operate your own Police Department”. Help keep BART safe: Disband the BART Police! 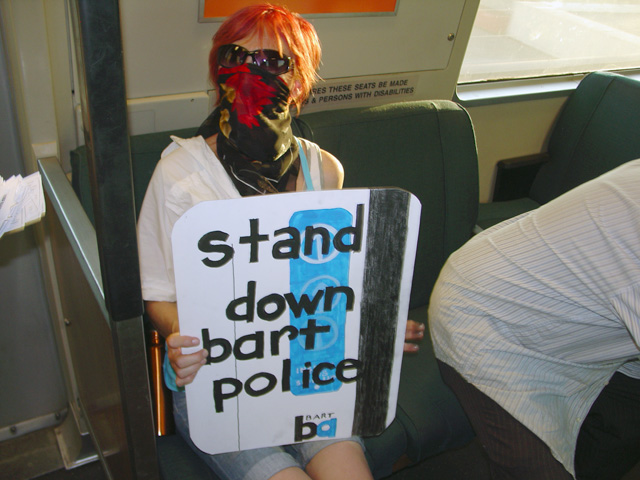 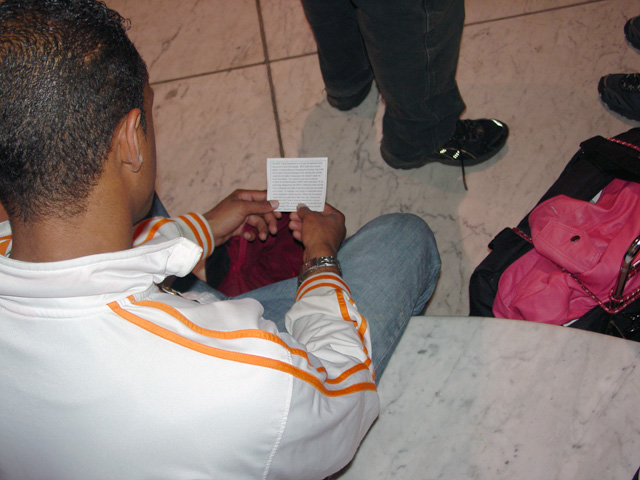 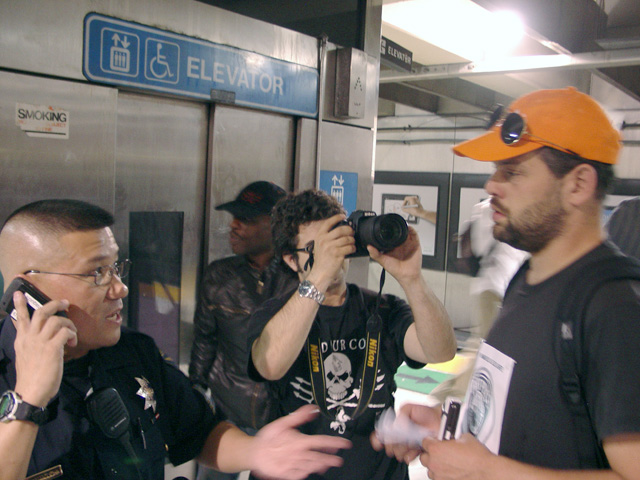 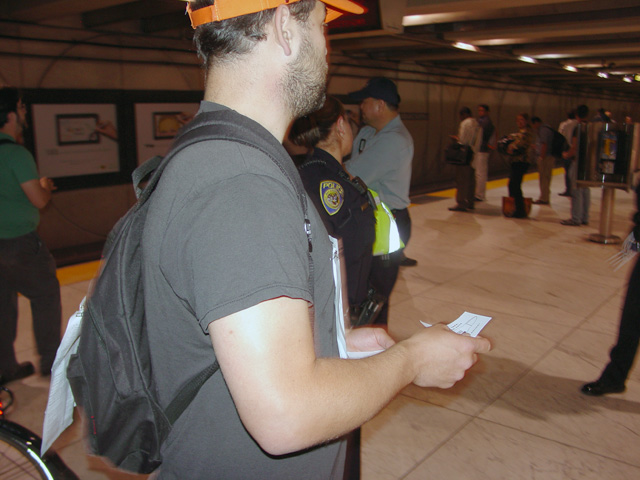 The two BART police just walk away without saying anything. 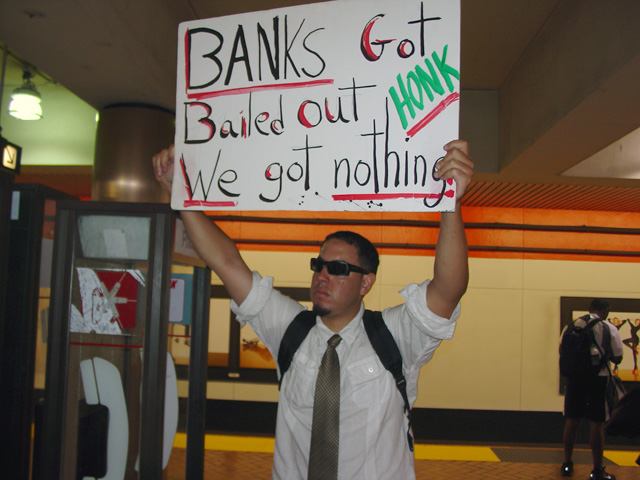 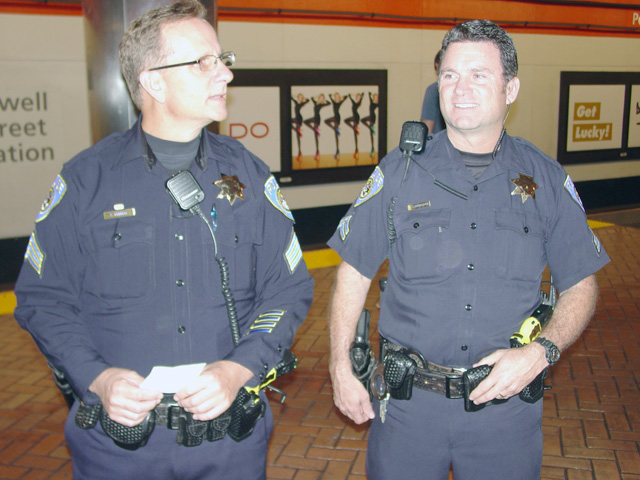 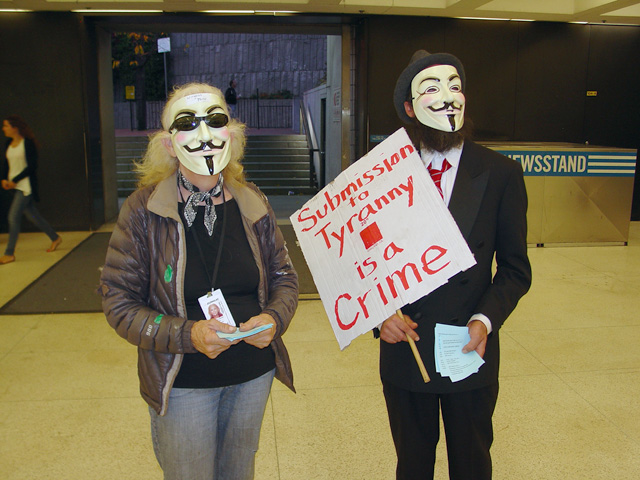 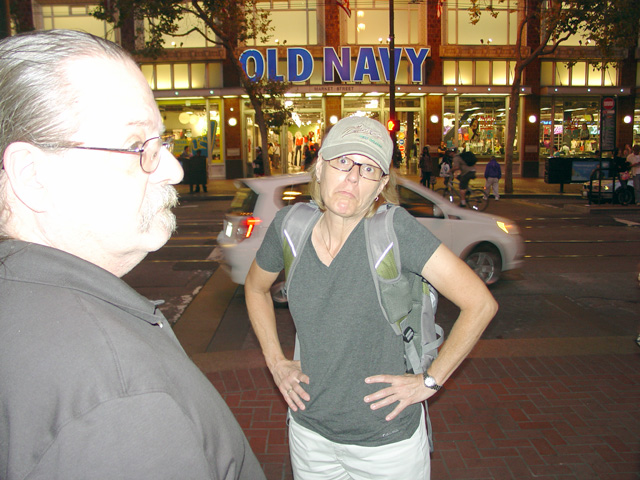 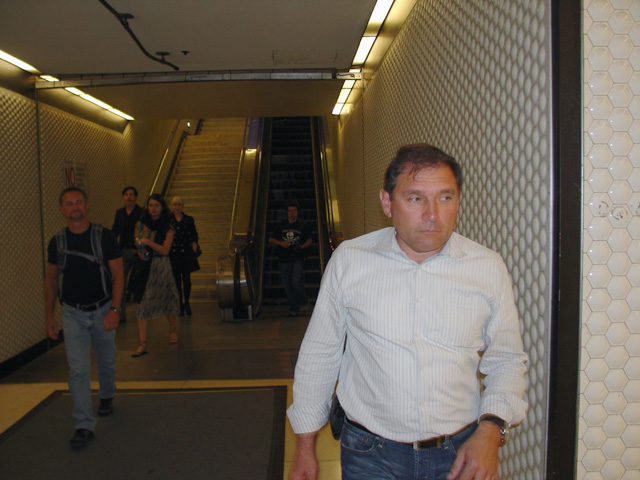 A fifth man, tall with grey hair, disappeared after the group was confronted on Market Street.
http://www.indybay.org/newsitems/2011/08/1...
Add Your Comments
LATEST COMMENTS ABOUT THIS ARTICLE
Listed below are the latest comments about this post.
These comments are submitted anonymously by website visitors.