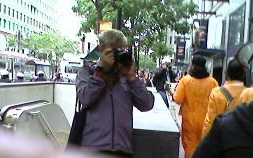 This guy (see jpeg below) shows up at political actions—particularly those related to state violence and apartheid in the US—and takes photographs of people.

He is conspicuously inconspicuous in his conduct, and also stands out because of his silver hair (toupée?) and his attire, which generally resembles that of a tourist.

When recently asked for his business card, he produced a business card identifying himself as Livejournal blogger Victor Polyakov, and acted like he spoke no English. (I've seen him around SF for at least a couple-few years, so I'm thinking he would have picked up a few sentences by now!)

While there is somebody who posts at livejournal.com as Victor Polyakov (see http://al-31f.livejournal.com), that person doesn't seem to be posting about political actions in the SF Bay area.