Add an Event
Newswire
Calendar
Features
Home
Donate
From the Open-Publishing Calendar
From the Open-Publishing Newswire
Indybay Feature
Publish to Newswire
Add an Event
Related Categories: East Bay | Police State & Prisons
No Decision from BART Board on Phone Shut Down, Board Seems to Lean Against, 8/24/11: audio
by dave id
Wednesday Aug 24th, 2011 3:46 PM
In a special meeting this morning, the BART Board of Directors met to discuss the agency's mobile phone service shutdown on August 11th that has raised the ire of civil libertarians and Anonymous. The earth shook during the meeting (literally, as an earthquake rolled through the building), but not because the Board made a concrete proposal or voted on a policy moving forward. Board President Bob Franklin did try to summarize what the board's consensus might be moving forward. That consensus seemed to lean toward recommendations made by the ACLU that phone service not be cut except in the most extreme cases such as bombings and hostage situations. The board also appeared to agree that the use of such tactics by BART should be proportionate to the concern being addressed, that accommodations be considered for those with disabilities, and that passengers possibly be given advanced warning of communication shutdowns in the future. Franklin indicated after the meeting that the board might take 2-4 weeks to create a formal policy. [Full audio below] 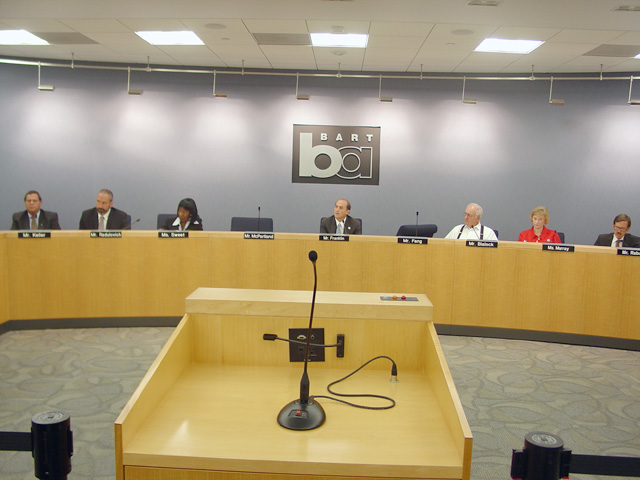 The meeting opened with BART employees, namely BART police chief Kenton Rainey and GM of operations Paul Oversier, defending the decision to shut down mobile phone antennas in underground stations throughout the system on August 11th. They emphasized the disingenuous rationale that it was for safety and that their concerns were not hypothetical (even though clearly BART was speculating about what might happen in a potential protest when they cut phone service).

Public comment was varied, with several people expressing support for the decision to cut phone service. The majority however, including a representative from the ACLU, were critical of the phone service disruption. Several spoke out against protests as unsafe or an inconvenience to passengers, and several spoke in favor of protests as a means to hold BART accountable for their actions. BART was told in no uncertain terms that demonstrations will continue until the BART police are disbanded. BART was encouraged to consider the historic implications for any related decisions they may make. The pretext of safety being the cause of the phone shutdown was questioned, when BART stations are regularly packed with drunken and sometimes belligerent sports fans and no communications shutdowns have been ordered before. One speaker raised the issue of the deaf being unable to communicate and receive txt messages during the shutdown. Representatives of BART's various employee unions spoke, one claiming that safety was an issue and that locking all gates but one when stations are suddenly closed during protests is responsible policy.

The Board likewise was mixed, although most seemed to approve of the decision to cut phone service and most bought into the idea that cutting phone service somehow increased public safety, albeit while also declaring their love for the First Amendment. Much of what they said seemed to be as geared toward defending BART for the shutdown as it was to establish a firm policy moving forward. The Board fell in line behind their police department, noting that training has increased, that more PR is needed to brighten their image, and disbanding the force is largely out of the question. Directors Joel Keller and Thomas Blalock said had they known of the ACLU's position earlier, they may have reconsidered their tacit approval of cutting phone service. Keller also tried to pass the buck to the new police oversight Citizen Review Board, but was shot down by other directors who felt that the matter was ultimately the BART board's responsibility. It was agreed, however, that the Citizen Review Board could make recommendations. One of the newest directors, Robert Raburn, spoke firmly in favor of free speech and against the shut down. The entire board seemed weary of the ongoing protests, which are now more frequent due to the free speech issues BART has created for itself.

Lynette Sweet was the only board member to ask questions of BART staff in order to publicly air some of the decision making that went on at the time. Apparently, there were no legal consultations that happened prior to the shutoff, other than BART legal staff being present during related discussions. Similarly, neither of the governing authorities on electronic communications were notified ahead of time, not the CPUC (California Public Utilities Commission) nor the FCC (Federal Communications Commission). Lynette Sweet stated, as have numerous critics of BART, that the real motivation was to silence dissent and to prevent potential protester disruption of BART service rather any genuine safety concerns. And, she spoke forcefully about the error of BART's ways, she was the only director who received applause from those in attendance.

Belatedly, the Board seemed to get the historic implications of what BART did and what they may later choose to do. While shying away from wanting to "tie the hands" of their police and staff to deal with protests, it appears that in the next several weeks that the BART board will establish some sort of policy that greatly increases the justification threshold upon which BART will ever shut down mobile phone antennas again. If the Board actually follows through with creating stricter guidelines, and if BART employees will respect such a policy directive, remains to be seen.


- This reporter being unable (and unwilling) to transcribe the entire meeting in a timely fashion, it is best if readers listen to the audio below for themselves. Several direct quotes from the meeting can be found in these first two links:


For background, prior to today's meeting: 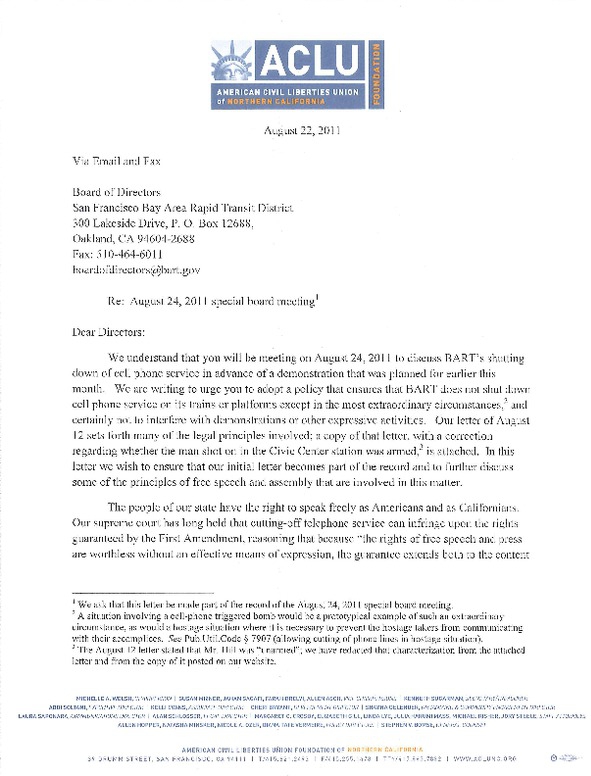 Below is an imperfect OCR text rendering of 8/22/11 letter:

We understand that you will be meeting on August 24,2011 to discuss BART's shutting
down of cell phone service in advance of a demonstration that was planned for earlier this
month. We are writing to urge you to adopt a policy that ensures that BART does not shut down
cell phone service on its trains or platforms except in the most extraordinary circumstances.' and
certainly not to interfere with demonstrations or other expressive activities. Our letter of August
12 sets forth many of the legal principles involved; a copy of that letter, with a correction
regarding whether the man shot on in the Civic Center station was armed;' is attached. In this
letter we wish to ensure that our initial letter becomes part of the record and to further discuss
some of the principles of free speech and assembly that are involved in this matter.
The people of our state have the right to speak freely as Americans and as Californians.
Our supreme court has long held that cutting-off telephone service can infringe upon the rights
guaranteed by the First Amendment, reasoning that because "the rights of free speech and press
are worthless without an effective means of expression, the guarantee extends both to the content

I We ask that this letter be made part of the record of the August 24,2011 special board meeting.
2 A situation involving a cell-phone triggered bomb would be a prototypical example of such an extraordinary
circumstance, as would a hostage situation where it is necessary to prevent the hostage takers from communicating
with their accomplices . See Pub .Util.Code § 7907 (allowing cutting of phone lines in hostage situation).
3 The August 12 letter stated that Mr. Hill was " unarmed"; we have redacted that characterization from the attached
letter and from the copy of it posted on our website.

of the communication and the means employe d for its dissemination .?" Our state constitution is
eve n more protecti ve of free expression than is the First Amendment. 5 Thus , the California
Constitution guarantees us the right to spea k free ly in areas where the federal protections app ly
only weakly, including, our supreme co urt has held , a tra in sta tion.6 Of course, the government
may reg ulate a speaker's conduct in order to preserve public safety and prevent unreasonable
disruption. But our supreme co urt has held that our state's laws can be used to punish pure
communication - such as the speech on BART's cell phone network -- only where the speech
creates "a clear and present danger of immi nent violence. "?
And as the wording of our state constitutional protection for speech makes clear, the
authority of the gov ernment to stop speech before it happens - as opposed to punishing it after
the fac t - is even more limited : "every person may free ly speak, write and publish his or her
sentiments on all subjects , being responsi ble for the abuse of this righ t." Cal. Const. Art. 1, § 2.
Under th is provi sion, the "right to speak, write, and publish, cannot be abused un til it is
exercised, and before it is exercised there can be no responsibility.t" If indiv iduals go beyond
what is permitte d by our laws and pro tected by the constitution they may be held responsible for
their actions; but BART canno t properly prevent protestor s or oth er cell-phone users from
speaking with one anothe r on the telephone in the first place. Our courts have held that even
private telephone carriers , whose actions are not constra ined by th e First Amendment, cannot
shut -off service simply becau se they believe that their customers may be usin g their se rvic es to
4 Sok ol v. Public Utilities Commission, 65 Ca l.2d 247, 255 ( 1966) ("t he disconn ection of teleph ones not only may
deprive the subsc ribe r of th e monet ary va lue of his eco nomic ven ture, but in suc h circumstances de nies him an
esse ntial mean s of communica tion fo r which there is no effect ive substitute . Hen ce, this restraint upon
communication by the subscribe r also affects his righ t of free speech as guaranteed by the First Amendment of the
fede ra l Co nstitution.") .

facilitate crime." BART, which is bound to follow both the First Amendment and the California
Constitution's Liberty of Speech clause, must not do so either.
Thank you for your attention to this important topic.