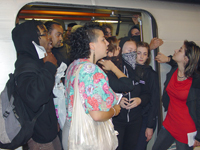 On the evening of July 3rd, two as of yet unidentified BART police officers responded to a report of an intoxicated man who could barely stand with an open container at the Civic Center BART station in San Francisco. Less than thirty seconds after arriving on the Civic Center platform, BART police shot and killed 5' 8", 150-pound Charles Hill with three rounds to his chest. While initially refusing to release BART's closed-circuit video of the incident and withholding numerous key details, purportedly to avoid biasing witnesses who have not yet been interviewed, BART's police chief Kenton Rainey in the meantime publicly rationalized the shooting, repeatedly defended his officers, and declared that he is "comfortable" with his officers having killed Charles Hill. [BART has since released one video from that night.] Charles Hill is the third person killed by BART police in less than three years. At least three others have died at the hands of BART police prior to the recent spree.

On July 11th, at least 150 demonstrators converged at the very same station to protest the killing, to demand that the officers be held accountable and that the entire "murderous, inept, corrupt" BART police department be shut down. Protesters promised to disrupt the Bay Area Rapid Transit system's business as usual to send a message to BART that the their police department's growing death toll is simply unacceptable. "They succeeded," BART PR spokesman Linton Johnson was forced to concede on the day of action as three of the busiest downtown San Francisco stations were forced to close and trains were disrupted for over two hours.

BART Board Meeting on Killing of Charles Hill in San Franciso, 7/14/11 |