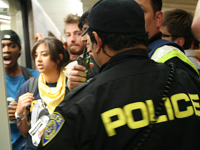 On April 8th, over 200 people demonstrated in San Francisco BART stations to push for justice and accountability in the murder of Oscar Grant with three demands: fire BART police officer Tony Pirone, charge Tony Pirone, and disband the entire BART police department. As people gathered for the action, tension was thick, as a demonstration inside a BART station had not been attempted before. Consensus was reached with those on the platform to take trains between stations in downtown San Francisco. Chants of "No justice, no rush" rang out — and demonstrators deliberately slowed their walk onto different trains in order to disrupt BART's normal rush hour schedule.

BART police and green-vested employees followed protesters — who chanted, played drums and horns — on trains to Montgomery, Powell St and Civic Center stations. Police attempted to stop the successful disruption of service by pushing or pulling demonstrators out of train car doorways, sometimes stepping in front of the doorways, refusing to allow more to enter or exit trains. BART's normal rush hour schedule was disrupted and delayed about 15 minutes in both directions by the action. One person was arrested on misdemeanor charges related to disrupting BART traffic. All charges have since been dropped.