BART Action April 8th: A Message to Passengers from the Organizers of this Demonstration

by Oakland for Justice
Flier distributed to passengers in the BART system on April 8th, 2010: 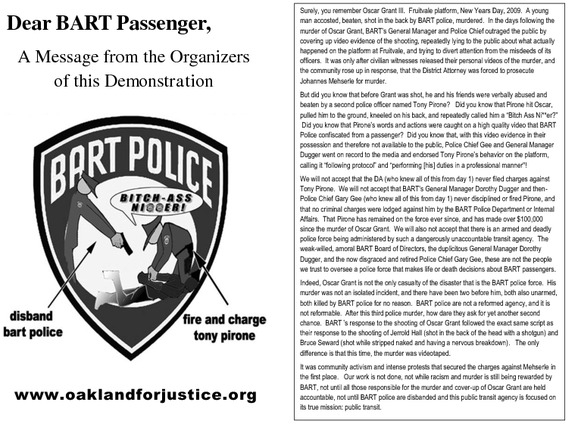 A Message from the Organizers of this Demonstration

Surely, you remember Oscar Grant III. Fruitvale platform, New Years Day, 2009. A young man accosted, beaten, shot in the back by BART police, murdered. In the days following the murder of Oscar Grant, BART's General Manager and Police Chief outraged the public by covering up video evidence of the shooting, repeatedly lying to the public about what actually happened on the platform at Fruitvale, and trying to divert attention from the misdeeds of its officers. It was only after civilian witnesses released their personal videos of the murder, and the community rose up in response, that the District Attorney was forced to prosecute Johannes Mehserle for murder.

But did you know that before Grant was shot, he and his friends were verbally abused and beaten by a second police officer named Tony Pirone? Did you know that Pirone hit Oscar, pulled him to the ground, kneeled on his back, and repeatedly called him a "Bitch Ass Ni**er?" Did you know that Pirone's words and actions were caught on a high quality video that BART Police confiscated from a passenger? Did you know that, with this video evidence in their possession and therefore not available to the public, Police Chief Gee and General Manager Dugger went on record to the media and endorsed Tony Pirone's behavior on the platform, calling it "following protocol" and "performing [his] duties in a professional manner"!

We will not accept that the DA (who knew all of this from day 1) never filed charges against Tony Pirone. We will not accept that BART's General Manager Dorothy Dugger and then-Police Chief Gary Gee (who knew all of this from day 1) never disciplined or fired Pirone, and that no criminal charges were lodged against him by the BART Police Department or Internal Affairs. That Pirone has remained on the force ever since, and has made over $100,000 since the murder of Oscar Grant. We will also not accept that there is an armed and deadly police force being administered by such a dangerously unaccountable transit agency. The weak-willed, amoral BART Board of Directors, the duplicitous General Manager Dorothy Dugger, and the now disgraced and retired Police Chief Gary Gee, these are not the people we trust to oversee a police force that makes life or death decisions about BART passengers.

Indeed, Oscar Grant is not the only casualty of the disaster that is the BART police force. His murder was not an isolated incident, and there have been two before him, both also unarmed, both killed by BART police for no reason. BART police are not a reformed agency, and it is not reformable. After this third police murder, how dare they ask for yet another second chance. BART 's response to the shooting of Oscar Grant followed the exact same script as their response to the shooting of Jerrold Hall (shot in the back of the head with a shotgun) and Bruce Seward (shot while stripped naked and having a nervous breakdown). The only difference is that this time, the murder was videotaped.

It was community activism and intense protests that secured the charges against Mehserle in the first place. Our work is not done, not while racism and murder is still being rewarded by BART, not until all those responsible for the murder and cover-up of Oscar Grant are held accountable, not until BART police are disbanded and this public transit agency is focused on its true mission: public transit.

END_OF_DOCUMENT_TOKEN_TO_BE_REPLACED
Add Your Comments
Support Independent Media
We are 100% volunteer and depend on your participation to sustain our efforts!