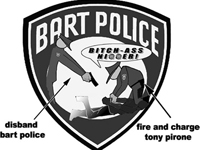 West Coast Days of Action Against State Violence April 8-9
Portland Actions Inspire Call-Out from the Bay to the Sound: No More Police Killings!

After the recent uprisings in Portland in response to two police murders, a call has gone out for "West Coast Days of Action April 8th and 9th, From the Bay to the Sound: No More Police Killings!" The call to action reads in part: "Organize protests and autonomous actions in your own city! ... The only times the police have ever been held responsible for their murders is when we take to the streets and halt business as usual. Following the law, being peaceful, being quiet, has never discouraged police violence, because it is the function of the police to use violence against the exploited, against the oppressed, against those who fight back." Announced actions include non-violent civil disobedience at Embarcadero BART station in San Francisco on April 8th and an Anti-Police General Assembly in Portland and a march against police brutality in Seattle on April 9th.

Framework for The Action | TAKE ACTION WITH US | Why are we doing this? | OaklandforJustice.org
Calendar Announcements: 1 | 2 | 3 | Holly Court Support April 5th

March: In Portland, after two recent murders by police, activists have taken to the streets in marches at least three times. Someone vandalized the Portland Police union headquarters doing thousands of dollars in damage on March 30th. Activists continue to press for the release of Joel Dow, who was arrested on various charges on March 29th and is currently being held on over $250,000 bail.

Free Em All! Free Mumia! Benefit at the Humanist Hall, Oakland: photos and audio | Indybay Coverage of the Justice for Oscar Grant Movement