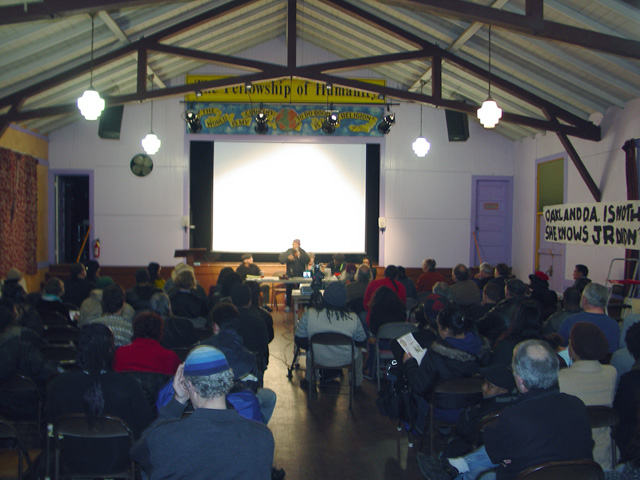 [Banner to right reads, "Oakland D.A. Is Nothing But a Liar, She Knows JR Didn't Start No Fire," in reference to JR Valrey's scheduled trial the next day on bogus felony charges related to the January 7th, 2009 Oscar Grant rebellion.]


Carol Seligman of the Labor Action Committee MCd the event.

Pam Afrika, spokeswoman for International Concerned Friends and Family of Mumia Abu-Jamal, speaks about the power of the people to resist the execution of Mumia despite what the powerful would have you believe. Death warrants have been signed yet Mumia is still alive because they are afraid of this movement. We need people to keep rising up to do what we gotta do to free Mumia. His options now are life in prison and the death penalty and we say those are both unacceptable. They want to execute Kevin Cooper too. They will only get away with it if we let them get away with it. She says the Effective Death Penalty Act was created for Mumia. It's an insult that U.S. Attorney General Eric Holder and the Justice Department recently announced that they will not pursue a civil rights case for the police murder of Sean Bell. "Down with this rotten-assed mother fuckin' system! Long live John Afrika! Shut it down."

Fred Hampton Jr., Chairman and founder of the POCC and son of assassinated Black Panther leader Fred Hampton, recounts recent travels and talks about doubts that arise from widespread police terrorism. As Malcolm X said, Black and other oppressed peoples have no choice but to struggle for justice because the oppression continues even if people try to go along with the system. It's a morale booster to see organizations and people mobilizing all over. We can expect to be attacked but we must never accept it. "Free 'em all!"

Ramona Afrika, survivor of the 1985 police bombing of the MOVE house in Philadelphia and former political prisoner, declares that revolution is necessary but first you must understand revolution and start with yourself, fighting the system deep within ourselves. We accept too many things. For example, we allow our oppressors to dictate the means with which we resist. They pretend they care about justice but they don't. Mumia is in jail for speaking up. Eight MOVE members are in jail for up to 100 years each. The same people who are calling Mumia and MOVE members murderers are the same ones who burned our babies alive, so why aren't they in jail? We have to do whatever it takes to get them off our backs. It's not about Mumia, it's not about MOVE, it's about us and the protection of our babies and all of us. The only unacceptable thing is doing nothing. There is something that everybody can do. Whatever you can contribute is good. Don't reject people because they might not be as far along as you -- work with them, teach them, bring them along, set an example. They're gonna kick your ass whether you fight back or not, so fight back. "Long live all those who fight for freedom!"

Jack Heyman, executive board member of Local 10 International Longshore & Warehouse Union (ILWU) and a member of the Labor Action Committee to Free Mumia Abu-Jamal, shows some video from the West Coast port shutdown for Mumia on his 45th birthday in 1999. He speaks about how the movement for Mumia was building from 1995-1999, but has slowed since then after a judge's order to delay the execution. Don't be fooled or lulled. There's no justice in this system and you have to fight with what you have. You have to shut down production -- that's the only power workers have under capitalism. By mobilizing labor, we do have power. There's not a lot of time left, they are moving fast now. He talks about not counting on cops to defend civil rights marchers, but physically confronting the Klan in the 1960s, and turning their white robes red. Cops were blue by day and white by night. We don't depend on the police or the system for justice, we have to fight for it ourselves every step of the way. Mehserle shot Oscar Grant in cold blood. We need to reaffirm the right to self-defense. We need to wake up and realize the Obama administration is not going to do nothing to free Mumia. Obama and Holder have shown where they stand. He leads the crowd in a chant: "An injury to one is an injury to all -- free Mumia Abu-Jamal!"

Richard Brown of the San Francisco 8 (SF8) says he is living proof that power does lie in the hands of the people. He recounts being a Black Panther and resisting in a manner not acceptable to the system, and eventually the establishment releasing the dogs of police and FBI to kill Panthers. He recalls being caught up in several shoot-outs and his commitment to defending himself. Years later they came after him and the SF8. While charges have been dropped against most of the SF8, Francisco Torres still faces charges and needs support.

Noelle Hanrahan, founder of Prison Radio, speaks about her work recording and broadcasting the voice of Mumia over the years. It's hard to raise money for Prison Radio because of misconceptions about Mumia, but it gets raised anyway to keep their work going. [Over a thousand dollars is raised that night at the Humanist Hall.] They've worked on building up technology that cuts out distortion and the sounds of the "box" Mumia is calling from, to bring his voice out to the world as it naturally sounds. She encourages people to turn out for JR's court hearing the next day.

JR Valrey of Block Report Radio and the SF BayView thanks everyone for their support and notes that the POCC has been working on Mumia's behalf over the years. [2007 interview with Mumia.] He talks about conditions in Haiti since the earthquake that he witnessed on a recent trip. Haiti is a warrior nation that we need to stand behind.

Jack Bryson, father of two of Oscar Grant's friends on the platform when he was murdered and they all were abused by BART police, reports on his trip to Los Angeles for Johannes Mehserle's second hearing in LA. When they moved the case from Oakland they thought they were helping Mehserle but they really linked up activists in California. He talks about how Mehserle tried to have bail reduced but judge refused that request which means that Mehserle will have to raise another $300,000 or he will have to return to jail. The trial is scheduled to start on June 7th. If we win this one, it will straighten out what police do to us.

Adimu Madyun of 393 films introduces the feature-length version of "Operation Small Axe," screened for the first time ever. The film was not written but documented. The first day of shooting an agent provocateur started a fight at an Oscar Grant benefit at the Black Dot Cafe. The movie tells the story from the voice of the people. He wants people to look past if someone says something they shouldn't. JR's always moving and getting something done, so he wanted to help show that. They are looking for the movie to play festivals and be shown to audiences all over. DVDs are available. It should motivate you to keep pushing on. [Audio from the film screening is not included here.] 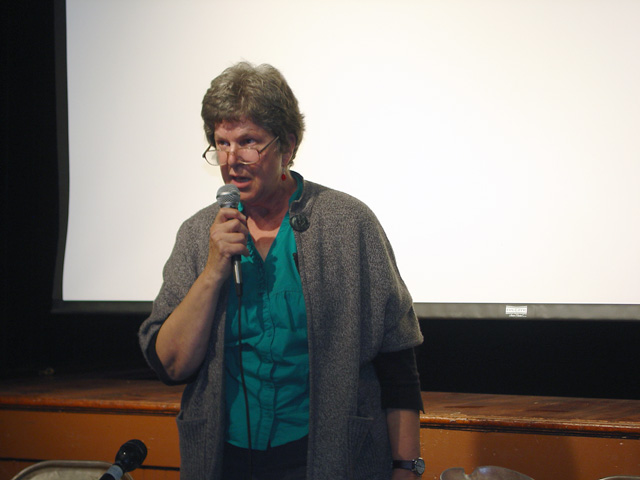 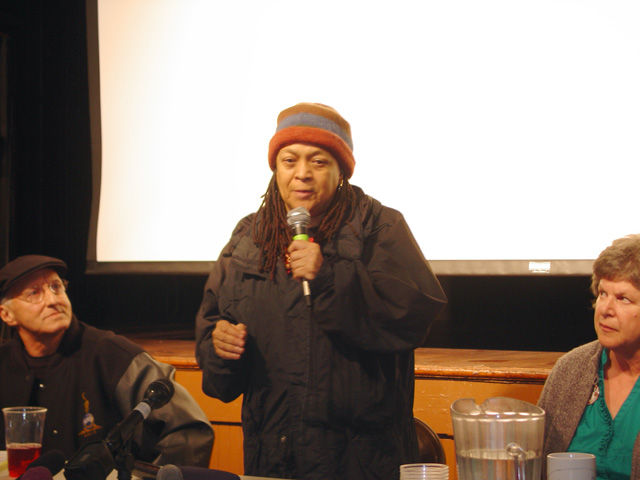 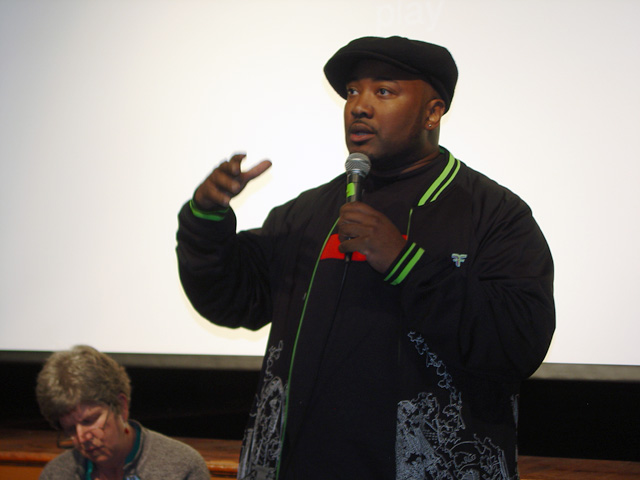 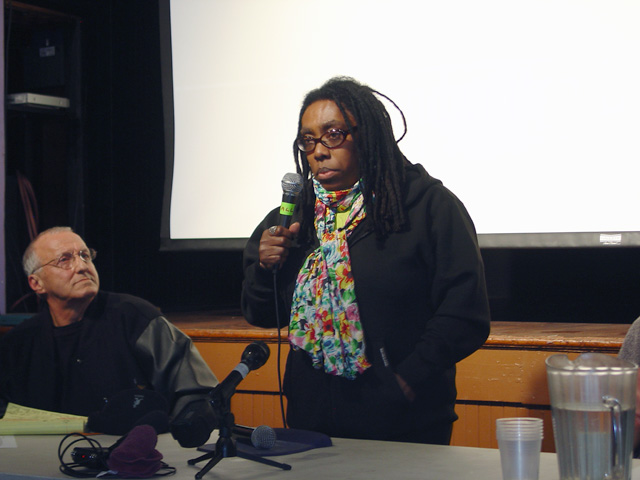 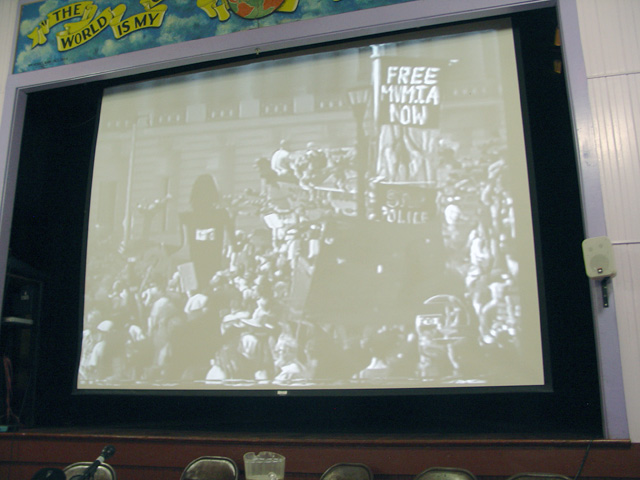 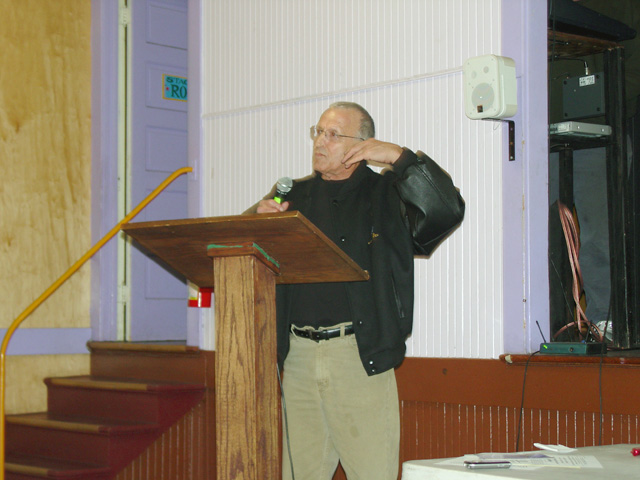 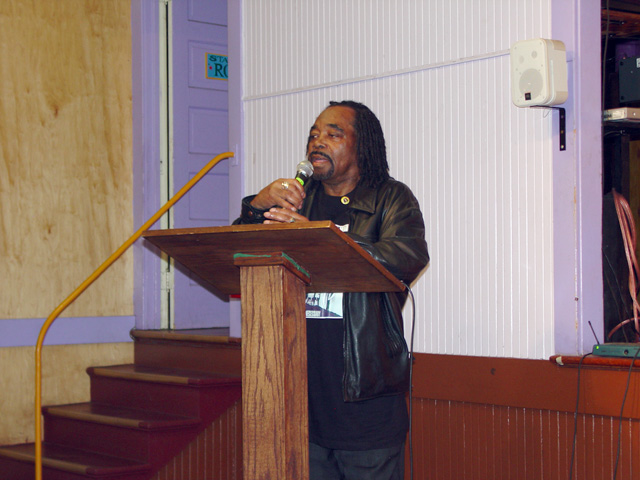 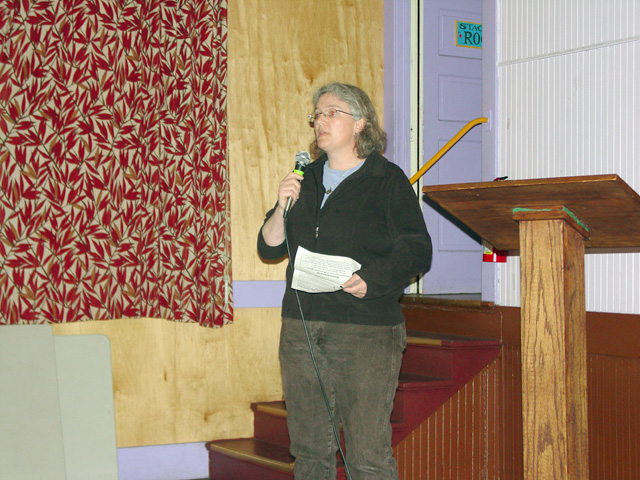 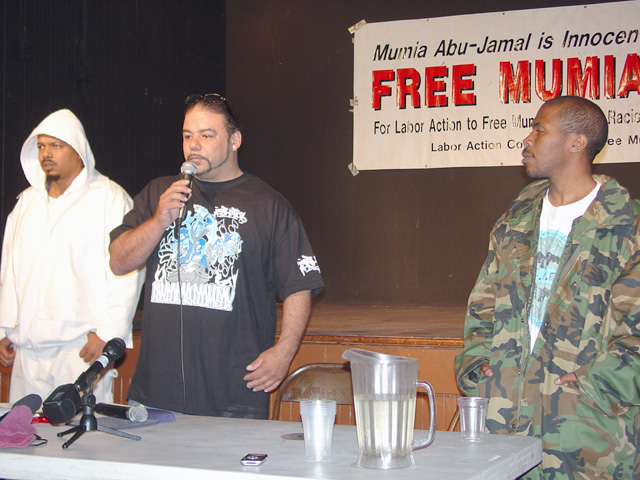