Add an Event
Newswire
Calendar
Features
Home
Donate
From the Open-Publishing Calendar
From the Open-Publishing Newswire
Indybay Feature
Publish to Newswire
Add an Event
Related Categories: U.S. | Police State & Prisons
Third Time's the Charm; Portland Anarchists Take the Streets Against the Police Once More
by anon via anarchist news
Wednesday Mar 31st, 2010 1:23 PM
Last week, Jack Dale Collins, a homeless man having a mental health crisis was shot and murdered by the Portland Police. Two months ago, Aaron Campbell, a suicidal black man grieving over the death of his brother the same day, was shot with beanbag guns, killed by a shot in the back, and had dogs released on his corpse. 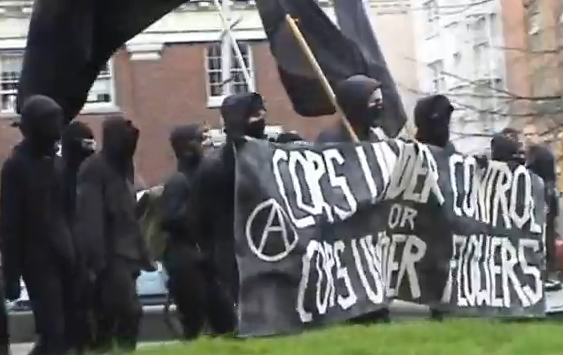 Last week, hours after the second killing in two months, Portland anarchists gathered and marched through the streets towards the East Police Precinct; bank windows were broken, neighbors came out of their houses and talked to us, and the police scrambled to respond to a spontaneous display of rage.

The next day, even more people gathered in the park, seizing Hawthorne and marching past bars and bike shops, homes and hipster dives. Once again, people poured out of their bars and houses, watching the march and receiving fliers denouncing the presence of police in our community. All were supportive; many joined the march, chanting "Cops! Pigs! Murderers!" and "Our Passion for Freedom is Stronger Than Their Prisons!"

Distrust and anger towards the police is at an all-time high in Portland. The civil trial for the 2006 police murder of James Chasse, another unarmed man in a mental health crisis, begins in two months. In February, Black community leaders stormed city hall and refused to leave, demanding justice for Aaron Campbell. In a recent poll, only 56% of the population of Portland said that they trust the police. Divided demographically, 67% of African Americans and 82% of Hispanics do not trust the police. The black weekly, The Skanner, has published articles telling people not to call the police if they are having a mental health crisis.

The cracks in the facade of public trust and acceptance of police are showing, and widening. Yesterday, we thrust a crowbar into those cracks and wrenched them wide open.

The fliers were ubiquitous: "Enough is Enough; Protect our Community, Protect Ourselves!" Tags have sprouted around Portland in prominent locations: Fuck the Police; I Hate Police; ACAB (All Cops Are Bastards). Yesterday, we gathered again, this time downtown. The corporate media, shitting themselves over the potential for violence, discovered the words "Black Bloc" posted on Indymedia and showed up in force. The pigs arrived before the protesters: Riot police, mounted cops, and tactical bike cops.

Flanked by police and the media, a small trickle of people grew into a flood. 50, 60, 70 people in all black, plus another hundred or more who saw the fliers and, disgusted by police violence, came out in support. Not even the freezing weather and persistent rain can dampen our spirits. The police started moving: lines on this street, a team on that street, ready to swoop in and keep the people out of the streets. Would we ever get out of the park? Were the liberals correct, that we would alienate and endanger all of the unprepared people who joined the march?

The bloc tightened in the park, chanting. "No Justice, No Peace! Fuck The Police!" "One Chant to Unite Us All: Cops! Pigs! Murderers!" The others, those "vulnerable attendees" consistently fetishized by liberals, joined in, and chants rang out across the Park Blocks. And then, off they went, running down the sidewalk, past the police lines, and into the street, in a move that would be repeated over and over again during the four hour snake march that followed: The bloc in the street, others following on the sidewalk. Two hundred people marched on the justice center, and then past it, into the business district. Cracks spread across a Bank of America window. The first incident of "alienating, irresponsible violence, and yet everyone followed; no one was alienated, everyone was focused on their rage.

Over and over again: The march was forced off the road by horses and motorcycles, pushed onto a sidewalk corner, and then took off running again, leaving the pigs behind and seizing the street again. To Portland State University! a fraction of the march split, ran into PSU banging on doors, bring students out of their ivory tower and into the real world. Students gathered at their windows, on their skywalks, waving and joining the chants: "Cops! Pigs! Murderers!" and "We Need Solidarity to End Police Brutality"

We left PSU, larger than when we arrived. Everywhere we went the march grew; passersby joined us, cars honked and handed out water bottles. Police were visibly angry and afraid; they had lost control of the march, and the city. The rage in downtown Portland was palpable; while helicopters circled, sirens wailed, and bike cops bashed people with their bikes, everyone who wasn't a cop got a flier, nodded their head, and shook their fist at the police.

Away from PSU, through a park, through an alley, onto a street and through a parking garage towards the freeway. The pigs didn't like that, and managed to hold us off the freeway, but the march continued to move like a ballet of rage. It wasn't only the Black Bloc in the streets anymore; when we had the streets, everyone was in them. When we didn't, we ran down sidewalks, backtracked, and shook off the police until we could seize the streets again.

To the City Center, and Pioneer Square; a young man, a passerby who wasn't in the march is arrested. He is given jail support info, and his five friends join the march, newly pissed at the pigs. Back to the Justice Center; it's dark now, and we can see the lights in holding cells far above us. Again, we chant: "Fire to the Prisons! Off the Pigs and Free the Prisoners!" The lights in the building flicker on and off in solidarity. They can hear us, and we can see them.

A young woman I've never seen before, who wasn't with us at the beginning, is leading the chants now: "Our Passion For Freedom Is Stronger Than Their Prisons!" We linger in front of the Justice Center, making our arrested comrades aware of our presence. And then we're off again, around the block in circles until we have an opening, and then back onto the street and into downtown, to the bars. People pour out of their bars, stare out the windows of the restaurants. Someone holds a flier up to the window; the occupants come to the window, read the flier, and smile. Even more people now; many of the original faces are gone, but our numbers are the same as before. A young woman is on the phone with her friends: "I just got hit by a cop! I'm in a riot in downtown Portland--You should come protest!"
These aren't summit-hardened anarchists now, they are passersby who hate the pigs. A woman in a wheelchair shouts, over and over again: "Fuck the Police! Get off our streets!" Another new face leads a chant: "Whose Cops? Not Ours!"

And so it goes, for four hours. The march starts with one group of people, ends with an entirely different population, but the message and the tactics are the same. Fuck the police; These are our streets. The crowd, tired and wet and cold, slowly dissipates, but not before 30 or so people block the Steel Bridge and then march across it, slowing traffic and bringing their message to the other side of the city.

Today, rest and court solidarity for our arrested comrades. Everyone feels like something has changed in Portland. Anarchists, demoralized and ostracized since the liberal take-over of the anti-war movement in Portland, have come together again. Three spontaneous marches in a week, each one larger than the last. Next week we meet again, an assembly of anarchists learning once again to trust each other, to work together, to fight the police. An upcoming community forum about safety and the police, with ex-Black Panthers, radical social workers, and copwatchers. Another one in the works, discussing concrete alternatives to the police. Murmurs of neighborhood assemblies, of building alternatives to keep each other safe and to get the pigs off the block.

These marches were our call to those who can hear: we are organizing ourselves, we are done waiting. We have chosen to take sides within our context, to exploit cracks and to fight the police wherever we are. We constitute a force against control; we seek to widen and deepen this crisis, not to manage it.
http://anarchistnews.org/?q=node/10962
Add Your Comments
LATEST COMMENTS ABOUT THIS ARTICLE
Listed below are the latest comments about this post.
These comments are submitted anonymously by website visitors.