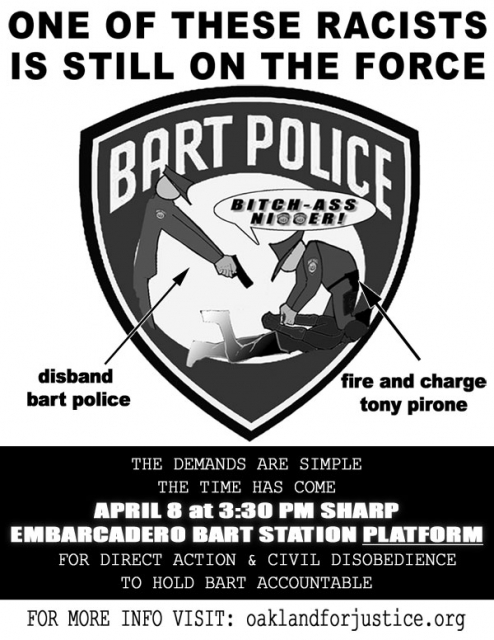 Early on New Year's Day 2009, Tony Pirone physically and verbally assaulted BART passengers Oscar Grant and his friends at the Fruitvale BART station. Tony Pirone then put his knee into Oscar Grant's neck, pressing him face down into the BART platform. Tony Pirone repeated the words "bitch ass nigger" at least twice just before fellow BART cop Johannes Mehserle shot Oscar Grant in the back. These facts were caught on videotape and have been known to BART and the Alameda County District Attorney's office ever since, yet Tony Pirone has not been fired, charged, or even disciplined for his role in the murder of Oscar Grant. Instead, he has been on full paid leave for over a year.

Those troubled by the fact that BART has not held a single person accountable for the abuse and murder of Oscar Grant will engage in non-violent civil disobedience to demand the dismissal and prosecution of Tony Pirone, and to call for the disbanding of the BART police. The action will commence on the Embarcardero BART station platform at 4 p.m. on April 8.

Passengers who normally take BART during the afternoon rush hour are encouraged to join the action or to make alternate transportation plans that day.

Those interested in participating are encouraged to form an affinity group of trusted friends now. There will be roles for those willing to risk arrest and for those who choose to participate in a support capacity.

The time has come to stand up for justice and accountability at BART.


Spread the Word and Get Ready!


~ The April 8 action is a project of the Oakland General Assembly for Justice for Oscar Grant. 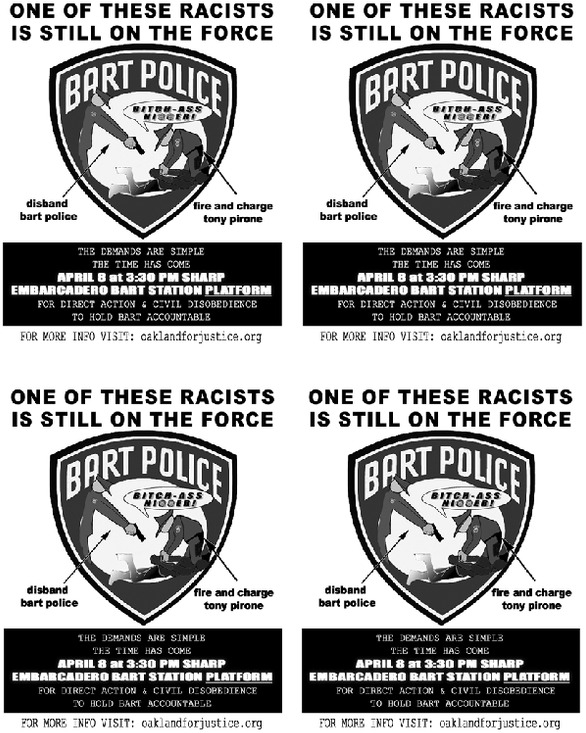 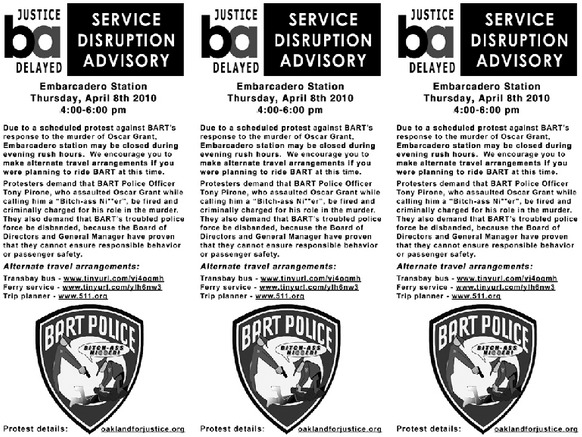 Download PDF (1.1MB)
END_OF_DOCUMENT_TOKEN_TO_BE_REPLACED
Add Your Comments
Latest Comments
Listed below are the latest comments about this post.
These comments are submitted anonymously by website visitors.
TITLE
AUTHOR
DATE
I'll be there for sure
insurrectionist
comeing out
(A)
to Bay Area Anarchist.....More firings need to be in order!
Justice for Oscar!
Pigs are getting fired
Bay Area Anarchist
read;
.
Support Independent Media
We are 100% volunteer and depend on your participation to sustain our efforts!