report from inside court room


Third Los Angeles Status Hearing: The hearing was primarily focused on proposed questions for the jury questionnaire as well as timelines. While it was brief, it shed some light on some important facets of the upcoming trial. First, Judge Perry, the D.A and Defense attorney Raines began the hearing in chambers discussing "security aspects" of the jury....
[full March 26th, 2010 hearing notes below] 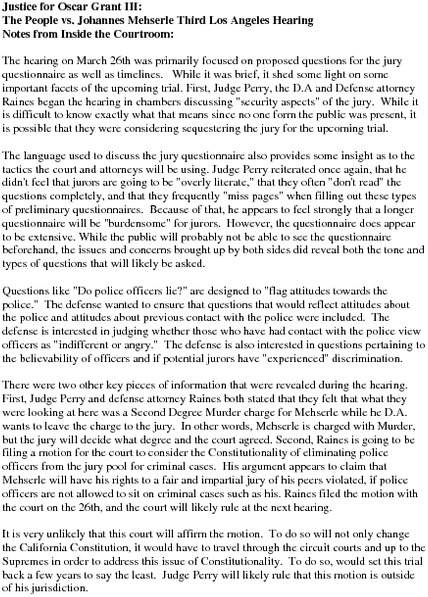 The hearing on March 26th was primarily focused on proposed questions for the jury questionnaire as well as timelines. While it was brief, it shed some light on some important facets of the upcoming trial. First, Judge Perry, the D.A and Defense attorney Raines began the hearing in chambers discussing "security aspects" of the jury. While it is difficult to know exactly what that means since no one form the public was present, it is possible that they were considering sequestering the jury for the upcoming trial.

The language used to discuss the jury questionnaire also provides some insight as to the tactics the court and attorneys will be using. Judge Perry reiterated once again, that he didn't feel that jurors are going to be "overly literate," that they often "don't read" the questions completely, and that they frequently "miss pages" when filling out these types of preliminary questionnaires. Because of that, he appears to feel strongly that a longer questionnaire will be "burdensome" for jurors. However, the questionnaire does appear to be extensive. While the public will probably not be able to see the questionnaire beforehand, the issues and concerns brought up by both sides did reveal both the tone and types of questions that will likely be asked.

There were two other key pieces of information that were revealed during the hearing. First, Judge Perry and defense attorney Raines both stated that they felt that what they were looking at here was a Second Degree Murder charge for Mehserle while he D.A. wants to leave the charge to the jury. In other words, Mehserle is charged with Murder, but the jury will decide what degree and the court agreed. Second, Raines is going to be filing a motion for the court to consider the Constitutionality of eliminating police officers from the jury pool for criminal cases. His argument appears to claim that Mehserle will have his rights to a fair and impartial jury of his peers violated, if police officers are not allowed to sit on criminal cases such as his. Raines filed the motion with the court on the 26th, and the court will likely rule at the next hearing.

It is very unlikely that this court will affirm the motion. To do so will not only change the California Constitution, it would have to travel through the circuit courts and up to the Supremes in order to address this issue of Constitutionality. To do so, would set this trial back a few years to say the least. Judge Perry will likely rule that this motion is outside of his jurisdiction.

Other eliminating motions will be submitted to the court by April 23rd and each side will submit their responses to the motions by April 30th so the court can hear them at the next hearing date on May 7th. Jury selection for the trial will now begin on June 1st. The court feels that the July 4th holiday could interfere with jury selection. Judge Perry plans on having long court days. They will likely begin at 8:30am and run through 4:00 pm five days a week. This schedule will allow them to get the case into the hands of the jury within 3 weeks of the start of the trial.

The next Los Angeles court date is scheduled for May 7th at 8:30 am.

In-Depth Background on the Mehserle Murder Case and the Justice for Oscar Grant Movement in Oakland:
http://www.indybay.org/oscargrant