Demand Justice from BART April 8th : TAKE ACTION WITH US

by Oakland for Justice

Tony Pirone physically and verbally abused Oscar Grant and his friends, then knelt on Oscar's neck, pressing him into the BART platform as fellow BART Cop, Johannes Mehserle shot him in the back. Pirone repeated the words "BITCH ASS NI@@ER" at least twice before the fatal shot was fired. These facts were caught on videotape and have been known to BART for over a year, yet Pirone has not been fired, charged, or even disciplined for his participation in the murder of Oscar Grant. In fact, he's been on full paid leave for over a year now.

We need to step up and do something about this. On April 8th, join us as we occupy the Embarcadero BART station to demand that Tony Pirone be fired and charged — and that BART police be disbanded. Meet ON THE BART PLATFORM at 3:30 PM sharp!

How can I help? — Action Guidelines — Form an Affinity Group — TAKE ACTION WITH US 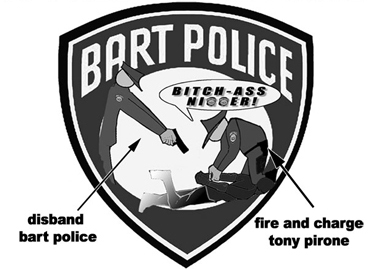 TAKE ACTION WITH US

DEMAND JUSTICE FOR OSCAR GRANT. THE TIME HAS COME

END_OF_DOCUMENT_TOKEN_TO_BE_REPLACED
Add Your Comments
Latest Comments
Listed below are the latest comments about this post.
These comments are submitted anonymously by website visitors.
TITLE
AUTHOR
DATE
American people lay down to get arrested while in other countries people unite & resist.
Anarchist
How will keeping Commuters in SF help bring Justice ?
In Soldarity with Your Sprit
Support Independent Media
We are 100% volunteer and depend on your participation to sustain our efforts!