Add an Event
Newswire
Calendar
Features
Home
Donate
From the Open-Publishing Calendar
From the Open-Publishing Newswire
Indybay Feature
Publish to Newswire
Add an Event
Related Categories: East Bay | Police State & Prisons
BART Police Review Committee Meeting on Killing of Charles Hill, 7/12/11: audio and photos
by dave id
Saturday Jul 23rd, 2011 12:08 PM
In their first meeting since the BART police killing of Charles Hill on July 3rd, on the day after the protest in downtown stations on July 11th, BART directors Lynette Sweet and Tom Radulovich of the BART Police Review Committee heard feedback from the public on the shooting, BART's new citizen review board and auditor, and BART's public relations statements regarding the two. [Full audio below] 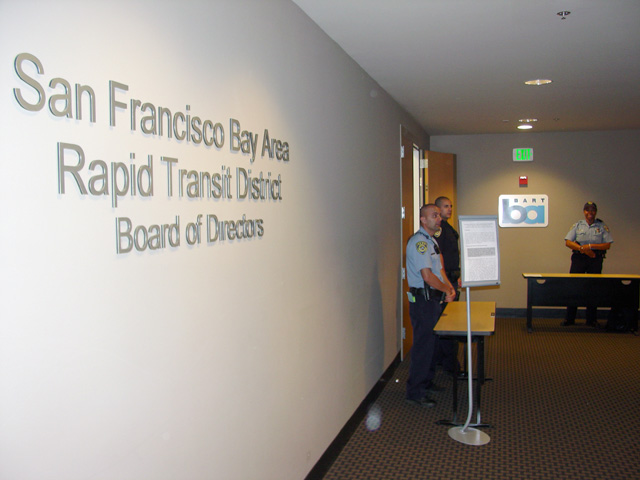 
Opening the meeting up to public comment first, before BART police chief Kenton Rainey would address the police killing, speakers address a variety of problematic issues surrounding BART's police force and its growing number of victims.

This reporter challenged BART on their continued public assertions that their new civilian review board and independent auditor were the result of community input, when in reality community input was overridden by a secret deal with PORAC (Peace Officers Research Association of California). Lynette Sweet denied that a secret deal had been made between BART and PORAC, but it is well-established that BART indeed watered down an already flawed police oversight model after the full BART board of directors approved it but before the plan went to the California state legislature. Sweet also highlighted that the civilian oversight board can recommend discipline for officers but neglected to mention that the police chief is empowered to overrule such recommendations.

After it is noted that BART police training hours have increased since the murder of Oscar Grant, Directors Sweet and Radulovich are asked by Krystof of No Justice No BART exactly what training they have undergone in managing a police force. Sweet answers that she undertook some of the same training that police officers undergo regarding use of force but has not received any additional training in administering a police department.

Regarding the protest that started in Civic Center station the day before, BART was called out for running its trains at high speeds through the stations, at risk to the safety of protesters, commuters, and police that packed downtown stations. Directors are warned that protesters have been civil, and if trains continue to roll through crowded stations at such speeds under similar circumstances, then things are going to get either very bloody or very ugly.

The two BART directors are told that there is one thing they can do right away, and that is to release the video of the shooting of Charles Hill, then get to work on disbanding the unmanageable BART police department [BART did release one video from the Civic Center station a week later].

Gene Hazard of the Oakland Post asks why police can't aim for the legs when they shoot. Rainey replies that aiming for appendages is too difficult and officers are trained to shoot at "center mass" to stop threats.

Civil rights attorney Anne Weills says that the killing of Charles Hill is an atrocity and questions why a taser couldn't be used on a mentally disabled person. She asks about training regarding 5150-type situations. "Charles Hill did not have to die," she declares. Rainey says he agrees that officers should be trained to de-escalate such situations, adding that NOBLE recommended crisis intervention training in their report after the murder of Oscar Grant, BART's field training officers have received such training in the past year, and BART intends to see that all officers receive de-escalation training eventually, but neither officer on the platform with Charles Hill had been trained yet to deal with mental health issues that might arise within the BART system. Anne Weills notes that it is a shame that someone has to die before proper training reaches across the entire department and strongly argues for disarming the BART police.

Krystof returns to the issue of the NOBLE review, and asks why does BART need to run its own police department when BART does not maintain its own fire department or ambulance service. Tom Radulovich answers that BART has had a police department and that he doesn't believe the same level of accountability can be achieved if policing is contracted out to various jurisdictions within BART's service area. He adds that if BART's police force cannot be turned around, then other options do need to be seriously considered. Krystof points out that BART's project of developing an accountable police force has been a dangerous and expensive experiment, when part-time Board directors do not have the capacity nor the legal power to properly oversee their police force. Krystof adds that BART initially did not have its own police force under the original BART Act.

Lynette Sweet acknowledges the public's frustration and says that several board members feel the same way, but that they are trying to move things forward. She notes that they pushed for Marysol Domenici to be fired but that an arbitrator ordered that Domenici be rehired.

BART police chief Rainey then breaks down the killing of Charles Hill on July 3rd. He describes the original call about a person walking around the platform with an open bottle of alcohol. Two officers responded. Rainey reports that Charles Hill was "armed" with a bottle and "at least" two knives. Rainey continues that Hill was "ordered to drop his weapon -- instead he used his bottle and knife as offensive weapons and attacked our officers. During the confrontation, one of the officers discharged his duty firearm in defense of his life and his partner's life, striking Mr. Hill, ending the confrontation." Paramedics were called to the scene and CPR was performed. Hill was transported to San Francisco General Hospital, where he was pronounced dead approximately one hour later. Rainey offers condolences to Charles Hill's family and loved ones. Rainey adds that "one of our officers suffered a minor cut to the arm during the confrontation, but otherwise both officers are all right and still with their families." He said that the officers have been placed on routine administrative leave and that currently there are four separate investigations into the incident: SF police department, which is leading the investigation, SF District Attorney, BART's internal affairs, and BART's independent auditor. Rainey said witnessed were in the process of being interviewed and that BART had a partial video of the incident. Both officers gave statements the night of the incident. Rainey thanks SF PD chief Greg Suhr for his officers having responded to the incident.

Krystof asks if there is any new information that Rainey would like to add as nothing new was offered. Rainey says that SF sent their CSI team to the scene that night. Rainey refuses to release information about the distance between the shooting officer and Charles Hill at the time of the shooting, and he will not say whether the cut that BART reported happened to one of the officers was a result of Charles Hill's knife. Rainey could not say when the investigations would conclude.

This reporter asks what is being investigated when on the one hand Rainey is saying that details need to be held back due to the ongoing investigation but on the other hand Rainey plainly declares that his officers were "attacked" and refers to Charles Hill as a "suspect" when basically he was just a drunk person on the platform with an open container. What sort of issues are being investigated because it sounds like Rainey has already made up his mind that his officers acted in self-defense? And don't those public declarations by Rainey bias witnesses who have still not been interviewed? Rainey answers that he does not think he is biasing witnesses by making daily public statements about Hill attacking his officers. Rainey says BART's internal affairs is investigating if the actions of the police that night were in accordance with BART's polices, procedures, and training.

At that point, the new citizen police oversight board is introduced to those in attendance. The citizen board was set to have their very first meeting immediately after the police review committee meeting. Mark Smith is the new police auditor.

Rainey then offers an unsolicited comment: "Every life is precious, including the public safety officers. This notion that they have to be stabbed, cut, beaten, or shot before they can defend themselves is false. The notion that BART police department police officers are overly aggressive, again, false. On July 1st, our officers successfully took into custody an individual who we had a report that he had been brandishing a knife at the Montgomery station, he had a knife on his person, so our personnel are trained like all other law enforcement officers to try to take people into custody for breaking the law in the safest manner possible, for themselves, and any suspect, and any bystanders that are around."

Jabari Shaw suggests officers with repeated problems should have their faces placed on billboards as people who are caught committing a sex offense or soliciting prostitutes sometimes are. Radulovich counters that much information about police officers in California is restricted by the Police Officers' Bill of Rights. "The public doesn't have a right to know." 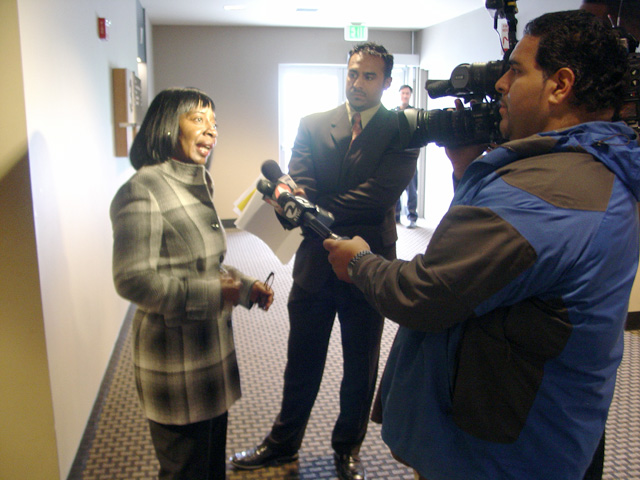 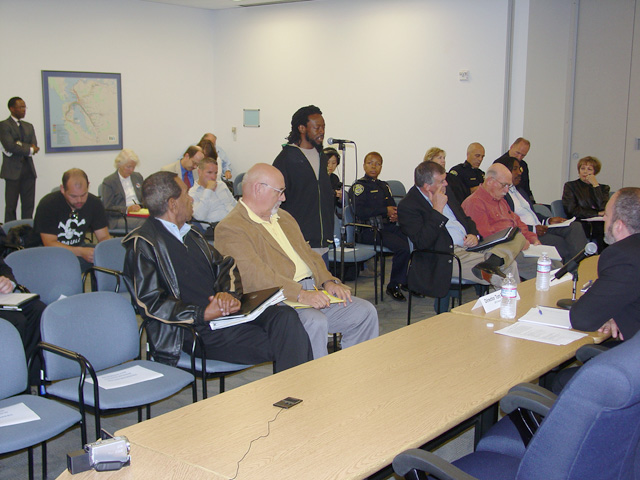 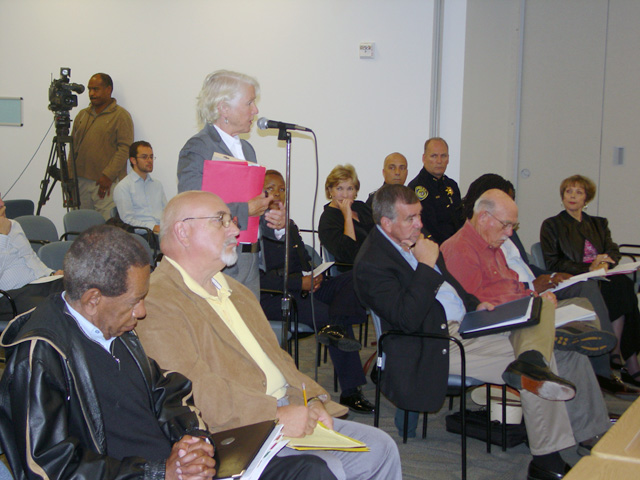 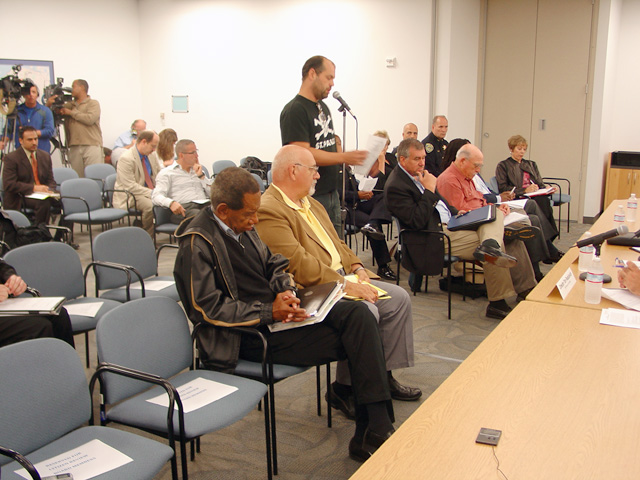 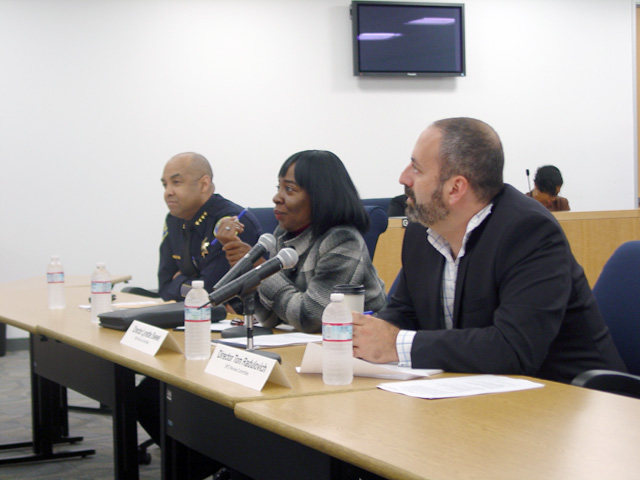