Add an Event
Newswire
Calendar
Features
Home
Donate
From the Open-Publishing Calendar
From the Open-Publishing Newswire
Indybay Feature
Publish to Newswire
Add an Event
Related Categories: East Bay | Police State & Prisons
BART Board Meeting on Killing of Charles Hill in San Franciso, 7/14/11: audio
by dave id
Saturday Jul 23rd, 2011 5:31 PM
Two days after BART's police review committee met to address the BART police killing of Charles Hill in Civic Center station on July 3rd, BART police chief Kenton Rainey and Independent Auditor Mark Smith both addressed the ongoing investigations with the full Board of Directors at their meeting on July 14th. Three members of the public spoke up on related matters. The first two were critical of BART, its police force, and its public relations statements, while the third simply wanted to object to the BART protest in downtown San Francisco stations on July 11th. [Full audio of agenda "Item 3A" below] 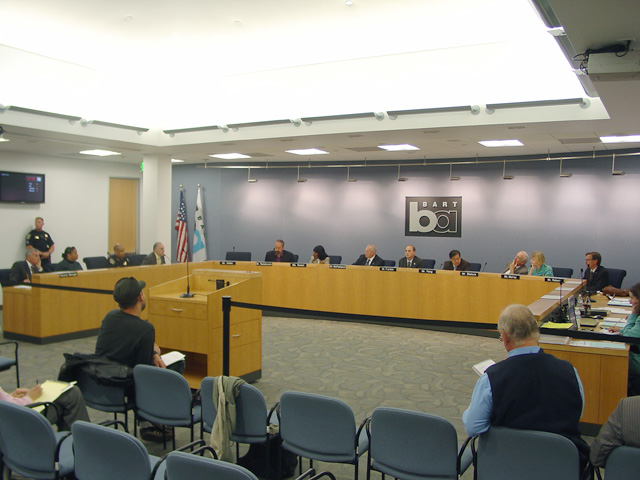 [Pictured above: BART's Board of Directors]


BART police chief Kenton Rainey speaks first and offers an "update" on the investigative processes surrounding the killing of Charles Hill. Rainey explains that because it happened in San Francisco, that SFPD's homicide detail and representatives from the SF District Attorney's office responded to the scene, along with BART's criminal affairs unit and internal affairs department. He reiterates that there are four separate on going investigations into the incident: SF police department, which is leading the investigation, SF District Attorney, BART's internal affairs, and BART's independent auditor. He says that approximately 40 witnesses have been identified, some the night of the killing and others who came forward later. All interviews are being conducted in the presence of members from the SFPD, the SF DA's office, and BART's criminal investigative unit. Rainey says that 19 witnesses have been interviewed thus far, either in person or over the telephone. As new information becomes available, he says it is being shared with BART's internal affairs department and the new Independent Auditor, Mark Smith. Rainey adds that video from BART's CCTV has been handed over to SFPD and is part of the criminal investigation. He says that SFPD does not want the video released until after they have interviewed all potential witnesses (BART did release one video exactly one week later). SFPD is in possession of all of the physical evidence. He notes that similar investigations can take months to complete, but that SFPD intends to file a progress report to its police chief within 45 days.

BART director Lynette Sweet asks Rainey if Mark Smith, the new civilian auditor, has been involved in the interview process. Rainey responds that Smith has not been involved. Sweet asserts that the auditor is supposed to be a part of the process, able to interject his own questions for his own investigation, if even through sworn officers, as he is intended to be the "eyes and ears" of the BART board.

Mark Smith echoes Rainey's comments in how he sees the role of the independent police auditor. Smith notes that this case is unique for BART in that SFPD is the lead investigatory agency, but says he has been in direct contact with BART's internal affairs and determinations regarding his involvement and ability to ask questions have been discussed, the terms of which he expects to "ensue shortly." Smith says that he believes that despite the complexities of a multi-layered investigation, there is a lot of accountability and that it is his responsibility to monitor the BART police department's investigation. He adds that he has already begun to fulfill that responsibility through conversations with Rainey and other BART staff about what they knew. He says he has maintained contact with internal investigators who have their own role to play in determining whether BART officers committed any misconduct. He asserts that he is continuously making sure he has all of the evidence they have and is reviewing it as it becomes available. Smith notes that some new information came to him the day before, without identifying what that information was, and that he is continuing to conduct his review. He says that when his review of BART's internal investigation is complete, he will release a report of his findings. He reports that the citizen review board met each other for the first time on July 12th and took public comment. The citizen board next meets on Monday, July 25th, at 9am and will be forming its operational procedures.

The floor is opened up for public comment and Krystof of No Justice No BART points out that on the night of the shooting, BART Deputy Police Chief Daniel Hartwig apparently told ABC-7 that no officers had received injuries during the incident with Charles Hill. The tapes of the dispatch calls from the officers originally released online reported an injury but there is a discrepancy between what Hartwig first said and Rainey's repeated telling of a minor injury an officer received during the incident. Krystof says that people are curious as to when that minor cut developed. Rainey refused to answer if Charles Hill had caused that cut at the BART police review committee meeting two days earlier, on the implication that releasing such a detail would bias the investigation, as if the investigation isn't already biased, as if the media isn't already reporting that Charles Hill cut the officer. Krystof encourages the BART directors to dig deeper by asking Hartwig how he determined that no officer was injured and Rainey on how he determined that one was. Rainey had said at the police review committee meeting that officers did not have to wait to be stabbed to defend themselves, so which was it? Did the officers wait to be stabbed before defending themselves or not?

This reporter first addressed public statements coming from BART PR spokesman Linton Johnson regarding the protests in downtown San Francisco BART stations on July 11th, using the words of the SF Bay Guardian's Tim Redmond in an editorial published the day before. From the SF Bay Guardian:

So I'm with the protesters on this one. It was important to make a statement, to disrupt business as usual, and to tell BART that, frankly, we're all sick of this shit.

"That delay goes to the protesters. That mess, those fringe groups own it."

I have a couple of questions: That "mess" of a police shooting -- who owns that? Why are people angry (for good reason) about the BART Police suddenly "fringe groups?"

And when do we get a "zero tolerance" policy for dubious police shootings?


Continuing on the "fringe groups" point, it is made known that protesters that day included members of Oscar Grant's friends and family; at least two relatives of both SF and Oakland police killings; people of faith; a few community groups, a diverse group as far as race, gender, and ages; all present and supportive of the action as it was conducted. Many of these same people sat for months in good faith in police review committee meetings to form the citizen police oversight committee. So the same people Linton Johnson is now calling fringe groups are the same people BART trumpets in press releases as community members having been involved in creating the citizen police review board.

The second part of this reporter's comments were directed toward Chief Rainey. "From what I know, I believe that your officers acted like cowards that day on the platform. I don't know if it was them personally or if that's just the training that they get, the BS that they are told that 'today could be the day you are going to die,' where you just pump them up with fear constantly." This perspective is based on having worked with severely emotionally disturbed (SED) teenage boys who sometimes needed to be physically restrained in an emergency when they physically attacked other clients or staff, sometimes with weapons such as knives. Using what is known as P.A.R.T. training, two to three staff could take down the biggest kids, sometimes well over six feet tall, without any serious injuries to either staff or clients. It's cowardice to immediately pull out a gun and shoot people. That's not putting a high enough value on human life.

The last public speaker, a "business man," completely ignored the previous comment about who those "fringe groups" really were and railed against "anarchists" that made the evening commute difficult for BART commuters at the protest three days earlier.

From there, board members ask questions of police chief Rainey and auditor Mark Smith. Director Bob Franklin asks about video and if there is any from the Civic Center station during the time between when the call went out about a drunken person through BART police dispatch until the time officers arrived on the scene. Rainey says he doesn't know specifically but notes that there are CCTV cameras throughout stations and BART has the ability to pull up tapes from various locations. Director James Fang asks when it is expected that SFPD will conclude their investigation. Rainey says there is no strict timeline. Fang adds that the lack of information surrounding the Oscar Grant case was an issue previously. Director Lynette Sweet directs Mark Smith to be more hands on, reminding him that the board is relying on his civilian perspective, and to make certain that the citizen police review board has all available information at any given moment, and that releases are made to the public in a timely manner. Smith says he couldn't agree more. Director John McPartland asks Smith if he believes the investigation is being conducted properly and if the appropriate amount of information has been disclosed to the public. Smith answers that everything he has seen thus far has been produced with great cooperation, produced rapidly, and he has seen some of the important evidence that is crucial to understanding the case, but has only part of the evidence and he is withholding judgement until he has all of the evidence. Franklin notes that information that he has access to is little more than what appears in the press, and he wonders too about the cut on the police officer's arm. Rainey responds with a rote answer that an officer was injured during the confrontation and that the details of the injury are a part of the ongoing and active investigation. It's inaudible in the audio here, but Krystof clarifies that the issue for him is not whether he suffered it or how he suffered it, but how the chief determined that he was injured when Hartwig had contradicted that. Franklin says the questions won't go away and they will be answered. As the related agenda item is closed, Fang again objects to having things of which they were unaware thrown at the board regarding Oscar Grant, and re-emphasizes that the board needs timely information.

http://www.indybay.org/newsitems/2011/07/1...
Add Your Comments
Support Independent Media
We are 100% volunteer and depend on your participation to sustain our efforts!