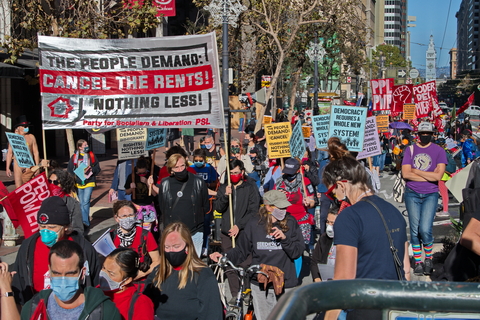 Protests to demand that every vote be counted spontaneously became celebrations of Trump losing after the presidential election was called by the major corporate news networks on November 7. The announcement of a Trump defeat came mid-morning Pacific time and election defense rallies were already scheduled throughout the day. In plazas large and small, rally speakers reminded their audiences that though they celebrate, they must continue to agitate for change. The damage done by Trump is extensive, including stirring up a new generation of racist hate groups, and pre-Trump struggles for justice and equality, such as the Black Lives Matter movement and the fight against climate change, will carry on.

In San Francisco, contingents from the San Francisco Labor Council, SEIU Local 1021, the American Federation of Teachers and other labor unions marched up Market Street. They were joined by environmentalists holding hastily-made signs including "Paris: We're Back", alluding to the Paris Climate Agreement from which Trump withdrew the United States. People festooned with bright orange Trump/Pence Out Now! stickers said it will be a relief to finally realize that goal and remove the immediate threat of a Trump autocracy.

In San Francisco's Castro District, in Vice-President elect Kamala Harris' birthplace of Oakland, in San Rafael in Marin County, and elsewhere, the mood was jubilant as people filled sidewalks and roadways. Many recalled their emotions four years ago when Trump was declared president-elect. Saying they are eager for the day he leaves office, they asked each other how and if he will leave as he has ensconced himself in the White House. Some demonstrators said they remain fearful of a coup.

Resistance on the Golden Gate Bridge |

On the Golden Gate Bridge, the Resistance Goes On |

Large "Count the Votes" and Labor Rally in San Francisco |

We Won! Celebrating with a March Along Market St. |

Mighty Messages from a Small Plaza

Related Features: Rallies Readied for Possible Post-Election Electoral Emergency | Nationwide Marches Honor RBG, Urge Getting Out the Vote to Defeat Trump | Uproar in the Bay Area After Postmaster General Acts to Impede Vote-by-Mail | Millions of Women Take a Stand Against Trump the Day After Inauguration: Women's Marches Across US and Worldwide Represent Largest Demonstrations in Recent Memory (2017) | We've Got a Bigger Problem Now: With Election of Trump as Next US President, Cities Across the Country Rise Up in Protest (2016)