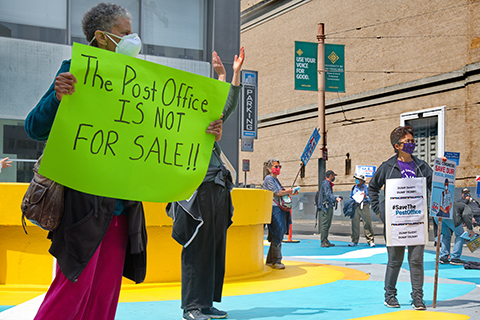 In mid-July, new US Postmaster General DeJoy implemented of a series of new policies that slowed down and delayed the mail. These included limiting mail transportation runs and a requirement that everything run on time, even if it meant leaving large quantities of mail undelivered. Accusations flew that the moves by "Trump's lackey" were intended to undermine the expected increase of mail-in ballots due to the coronavirus pandemic and thereby bolster Trump's chances of winning in November.

Many in the San Francisco Bay Area have long been concerned about U.S. mail privatization schemes and the fate of the longest running federal service. In 2013, local activists said that the husband of Senator Dianne Feinstein had been selling post offices to his friends on the cheap. A Trump win in 2016 was, many feared, a nail in the coffin for the USPS.

Soon after Postmaster DeJoy was installed in mid-June, veteran protesters in Palo Alto rallied with placards reading "DeJoy Brings us Woe." A national day of action on August 22 organized by a large coalition of groups drew protests with large attendance throughout the Bay Area, as well as throughout the nation. On August 25, community activists stood side by side with postal workers from the nation's largest postal union, APWU, the American Postal Workers Union in a day of action called for by the APWU.

Traffic Stopping Protest and March to Save the USPS |

SF Postal Workers in "US Mail Not For Sale" Rally |