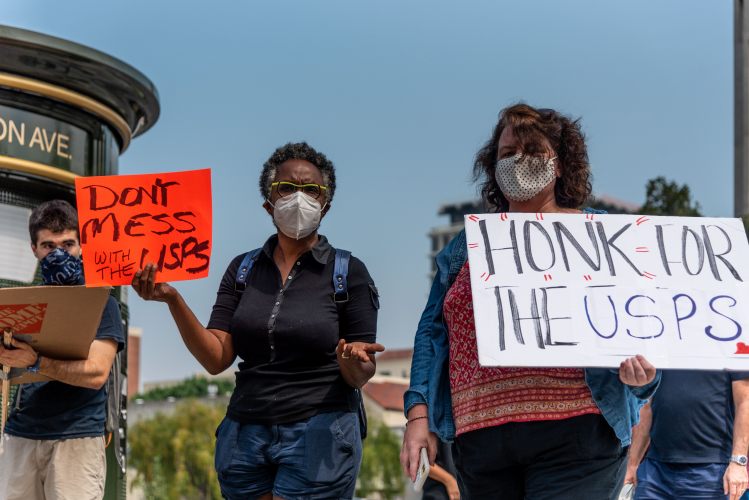 Postmaster General DeJoy’s mid-July implementation of a series of new policies slowed down and delayed the mail. These included the arbitrary canceling of overtime, limiting mail transportation runs, and demands that everything run on time, even if it meant leaving large quantities of mail undelivered.

APWU members are deeply committed to our mission of serving the public with “prompt, reliable and efficient” services to all communities. This has been powerfully underscored by their incredible dedication to connecting the country as frontline essential workers during these difficult and dangerous times of the pandemic.

Our members, our leaders and our union vehemently oppose policies that delay the mail, degrade service and drive business and revenue away from the Postal Service and deprive the public of the services they need

APWU members made outstanding efforts exposing the negative impact of these policies on postal customers. Workers, local, state and national union leaders forcefully took our concerns to TV, radio, print and social media. We organized rallies. We’ve been the eyes and ears documenting delayed mail. We spoke with Congressional representatives and other elected officials.

Our efforts were combined with those of postal customers, civil rights and veteran organizations, other labor unions and community groups, and many elected officials. There has been a sustained chorus throughout the land in support of the public Postal Service and postal workers.

Yesterday, PMG DeJoy was compelled to halt a number of these policies, at least temporarily through the November election. He also committed that the Postal Service will fully assist state election commissions to successfully meet the growing needs of vote-by-mail during this pandemic.

These rollbacks would not have happened without public outcry and action. The public would not have been aware of these regressive policies if APWU leaders, members and postal workers around the country had not sounded the alarm and led the charge.

While we welcome the temporary suspension of some these policies as a step in the right direction, they are far from sufficient and the struggle in defense of the public Postal Service, our jobs and our union, is far from over.

Our mission of processing, sorting and delivering mail to 160 million addresses a day, no matter who we are or where we live, does not just exist during an election season or for the next three months. We demand these regressive policies be permanently reversed and any damage be repaired.

We also must stay focused on the fact that the Covid-19-induced economic crisis is deeply affecting the projected finances of the United States Postal Service. As a public agency that normally does not rely on tax dollars, a steep drop in revenue linked to the pandemic will likely cause the USPS to run out of money early next year.

In order for our members and all postal workers to continue to carry out our vital mission for the people every day, the USPS is in immediate need of $25 billion in Covid-related financial relief. Such a measure has passed the House of Representatives and is now in the hands of the Senate. It’s time for Congress to deliver.

Up until now, the Trump administration has blocked the USPS from any direct financial assistance even as Congress and the Administration provided over $500 billion of COVID relief to private corporations. It is about time they take care of the public Postal Service, as well as to properly fund schools and cities and states and the essential services they provide.

We do our job. Congress and the administration need to do theirs.

Ours is not the United States Postal “Business.” It is the United States Postal “Service.” It is overwhelmingly supported by the people and belongs to the people. United with postal workers and our unions, the people have made it clear that they intend to keep it. The APWU is proud to continue to lead the way.
https://www.apwu.org/news/regarding-pmg-de...
§Sausalito on August 22
by In SF Bay Area Protesters Say It's Not Enough
Saturday Aug 29th, 2020 3:38 PM 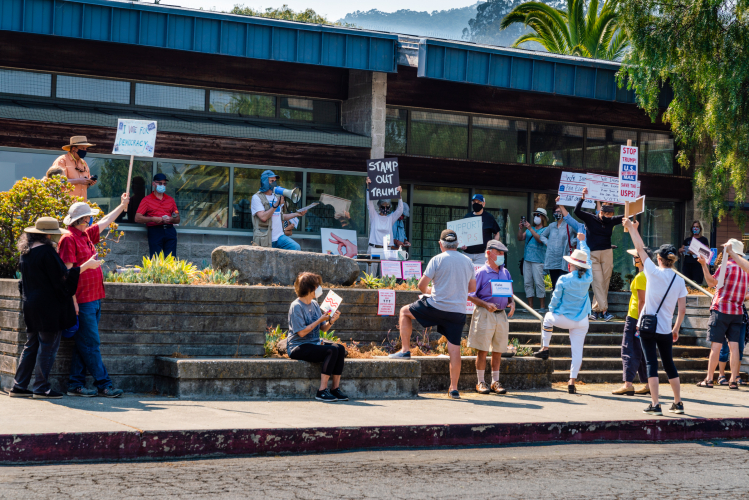 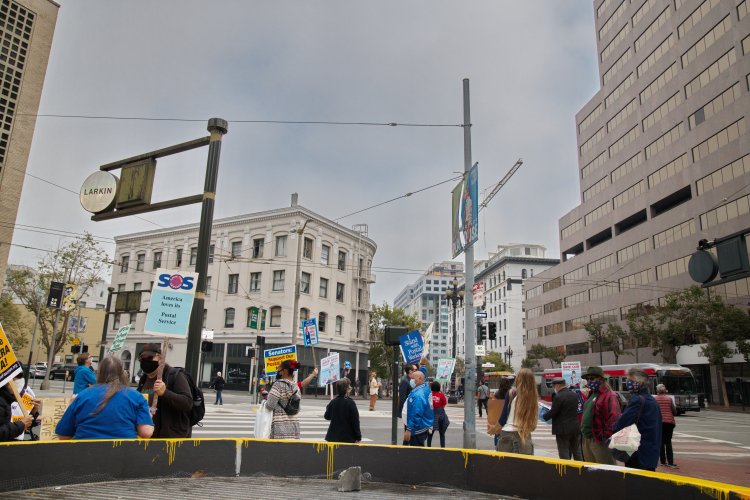 original image (3603x2400)
The largest postal worker union called for a national day of action on August 25. In San Francisco community activists joined APWU members in Federal Plaza. Photo by Leon Kunstenaar, Pro Bono Photo.
https://www.apwu.org/news/regarding-pmg-de...
Add Your Comments
Support Independent Media
We are 100% volunteer and depend on your participation to sustain our efforts!