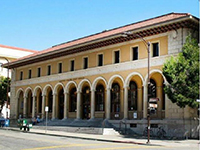 The Berkeley Post Office is being sold off as one of the first steps in the privatization of the Postal Service. JP Massar writes: "We petitioned. We wrote letters. We got the City Council and the Mayor to write letters. We rallied and marched. We got our state reps and Barbara Lee, our US Representative, to make entreaties. The decision to sell the historic Berkeley Post Office was made in flagrant disregard to all such."

Despite what seems to be the end of the road in terms of administrative challenges, a three-pronged local attack is being launched by various Berkeley community groups, Save The Berkeley Post Office and Strike Debt Bay Area. The first is a medium term threat of a lawsuit to block the sale: As soon as an actual sale is announced, attorneys will go to court to block it with a temporary restraining order. At the same time, steps will be taken to file a lawsuit to preserve the historic building as public space and to protect its New Deal-era art.

The third is a thinking-out-of-the-box attempt to rezone the space the Berkeley Post Office sits on so that it cannot be used for private, commercial enterprise. That would make the building a lot less attractive to potential buyers, perhaps lowering the price enough to make selling the building economically unattractive to the Post Office powers-that-be.