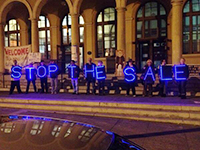 JP Massar writes: On April 17th, the Advisory Council on Historic Preservation issued its Preserving Historic Post Offices report to Congress "on compliance with Section 106 of the National Historic Preservation Act for the closure and disposal of its historic postal facilities." This report was requested by legislation initiated by Berkeley's United States Representative in Congress, Barbara Lee.

Massar says that Berkeley residents' experience attempting to interact with postal service management demonstrates a total lack of consideration for the community's concerns. He writes that USPS management, "ignores the law when it is inconvenient to their purposes; and we know that they are hell-bent on selling Post Office assets in pursuit of immediate revenue..."

Previous Related Indybay Feature: Community Groups Push to Save Berkley Post Office from Being Sold to a Commercial Business