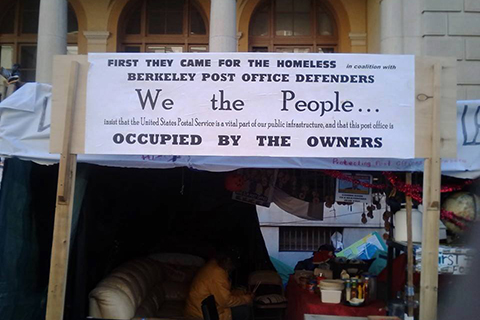 At 5am on April 12, US Postal Police and Inspectors, with support from the Berkeley Police Dept., arrived at the Main Berkeley Post Office, 2000 Alston Way, and literally dragged protesters out of their tents, seized all their belongings, and tore down the information tent, the shelter for a 17-month occupation. While trespassing was given by Postal Police as reason for the raid, no protesters were cited for any infraction.

Two groups of activists – First They Came for the Homeless and Berkeley Post Office Defenders – had occupied the grounds of the Main Berkeley Post Office continuously since late November 2014. The site had been ground zero in the fight against the privatization of the United States Postal Service (USPS) until one year ago when a Federal judge prevented the sale of the property and the occupation become symbolic of the plight of the homeless in Berkeley.

Mike Zint of First They Came for the Homeless writes: For 17 months and 12 days, a hand full of protesters occupied the post office in protest of the theft of our commons. During that time, we helped to bring attention to the sale of the downtown Berkeley post office. We installed community oriented services to reaffirm our ownership of this property. Those services included feeding those in need, a free box for donated items, a free library, a newspaper stand, a place for public posting of literature, outreach for the homeless, and a community garden. These services were utilized by everyone, housed and homeless alike. Thousands were fed, hundreds were clothed, and dozens of homeless were able to replace "confiscated" gear.

Celebrate the victory: Saving the Berkeley Post Office from being sold |

Community Meeting: Update on the Threat to the Berkeley Post Office |

"Stop the Sale!” and Christmas Decorating Party at the Berkeley Post Office |

David Rovics in Concert on the Berkeley Post Office Steps |

Jam the Sale of the Downtown Berkeley Post Office |

Ralph Nader Speaking on Privatization, the Post Office & the Fight Against the Corporate State |

Previous Related Indybay Features: Historic Post Offices Should Not Be For Sale | Community Groups Push to Save Berkley Post Office from Being Sold to a Commercial Business