Add an Event
Newswire
Calendar
Features
Home
Donate
From the Open-Publishing Calendar
From the Open-Publishing Newswire
Indybay Feature
Related Categories: San Francisco | Anti-War | Government & Elections | Immigrant Rights | Racial Justice
Double Protest in Union Square
by Leon Kunstenaar
Saturday Nov 14th, 2020 11:43 PM
Two demonstrations, one to repudiate a would be dictator and the other to protest the US' crimes against humanity at its border, took place in San Francisco 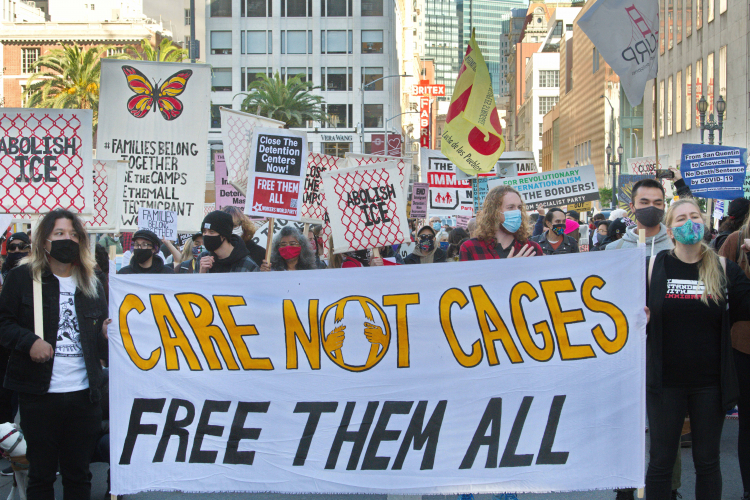 Reversing traditional hypocrisy, Trump has celebrated and harnessed the US's two great founding crimes, the Native American genocide and the enslavement of Africans.

He has shown that Fascist Nationalism finds a ready and willing constituency in the U.S. Seventy million people voted for him.

While Trump's managerial incompetence, especially of the pandemic, has allowed Biden's electoral victory, his proudly acknowledged and unpunished gangsterism has provided an identity and role model to the millions of aging white working people abandoned by the Democratic party. They kept this from the pollsters who, once again, failed to detect Trump's appeal.

The Democratic Party leadership remains seduced by the neoliberal worship of the marketplace and therefore lies vulnerable to the next fascistic fraudulent "populist." Those of us on the Left continue our protests.

A protest labeled "Biden's Win Is a Very Good Thing, But the Struggle Is Far From Over " rallied at Powell & Market, San Francisco and marched to Union Square. It was organized by San Francisco's ever active and increasingly mainstream Refuse Fascism Bay Area. They rallied on Market & Powell Streets, danced to some lively music and then marched up Powell Street to join the "Close the Camps" demonstration in progress in Union Square.

This demonstration, " Abolish Ice, Close the Camps, & Free Them All Rally & March," organized by Resistance SF and other local progressive groups, took place on Union Square. Bay Area opposition to ICE has been shouldered by the above groups and also by Lantinx and Asian groups. "Never Again Action", a group that sees the crimes at the US border as the roots of a potential Holocaust, while sending out many eloquent emails and requests for funds, has been largely absent from the streets.

After some strong speeches, with many banners and a brass band, all marched to 111 Taylor Street.

111 Taylor Street looks like an ordinary apartment building but is, in fact, a privately managed prison run by GEO Group. The march halted in front of the building where many called out the outrage. 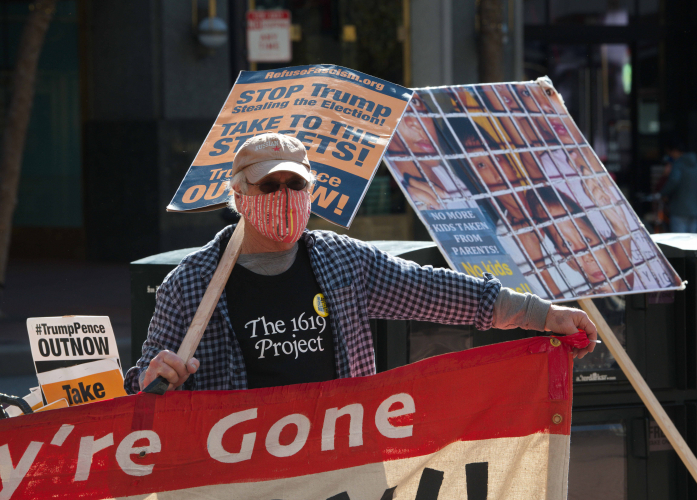 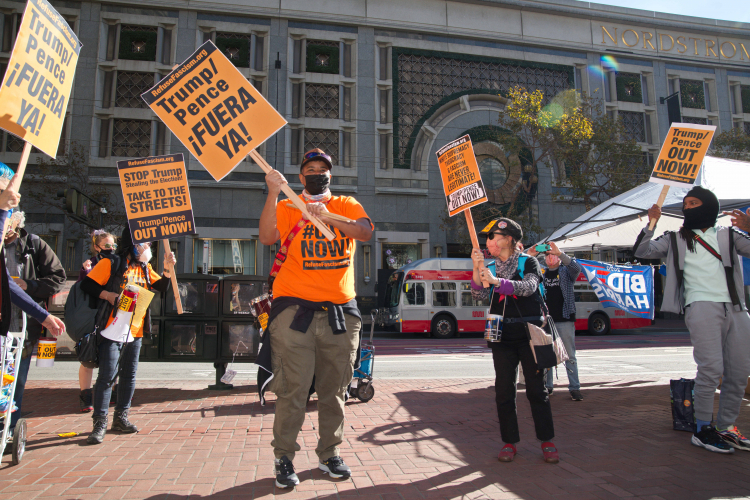 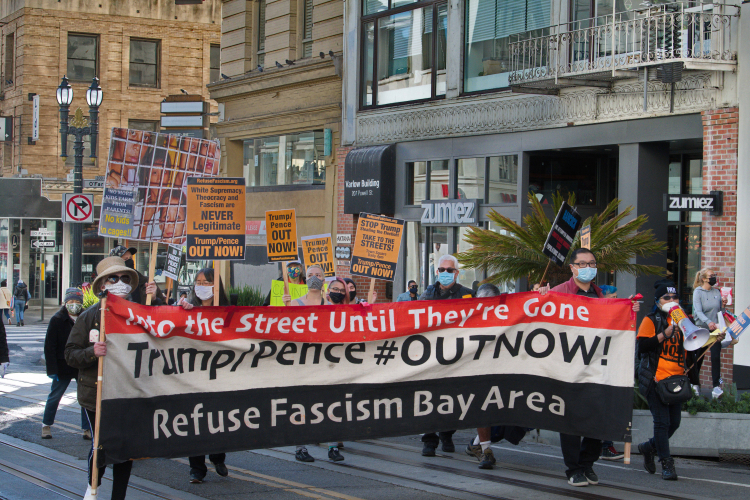 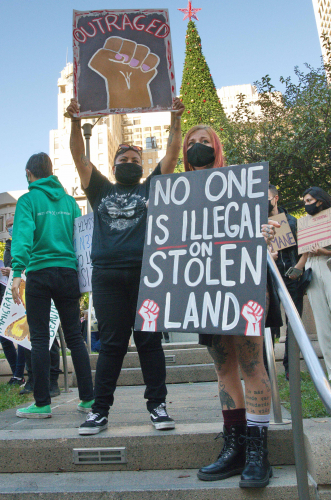 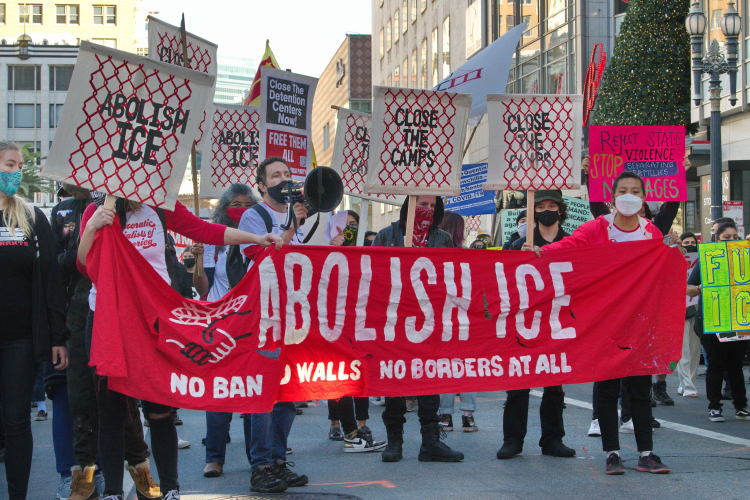 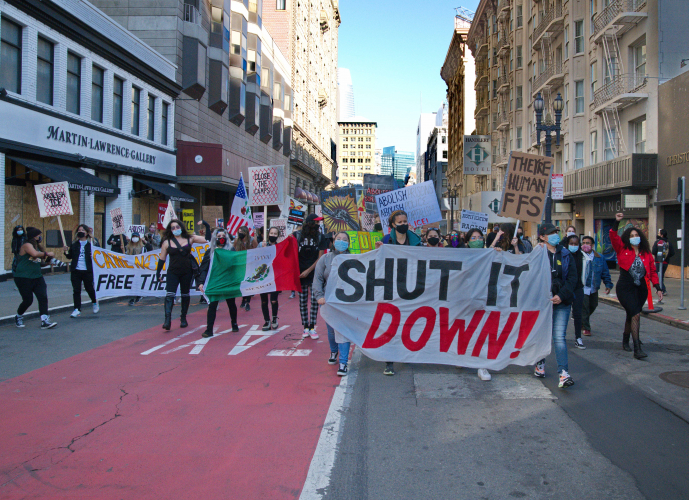 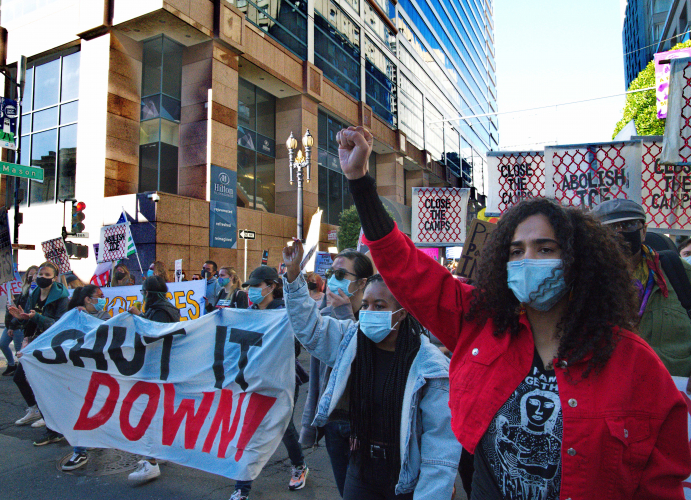 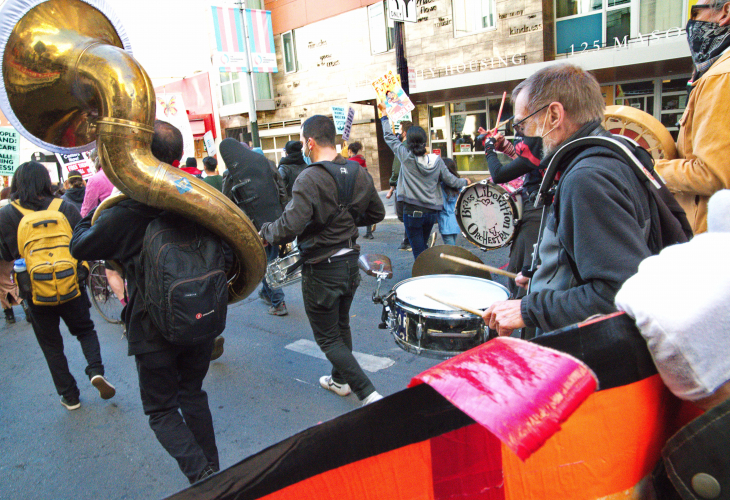 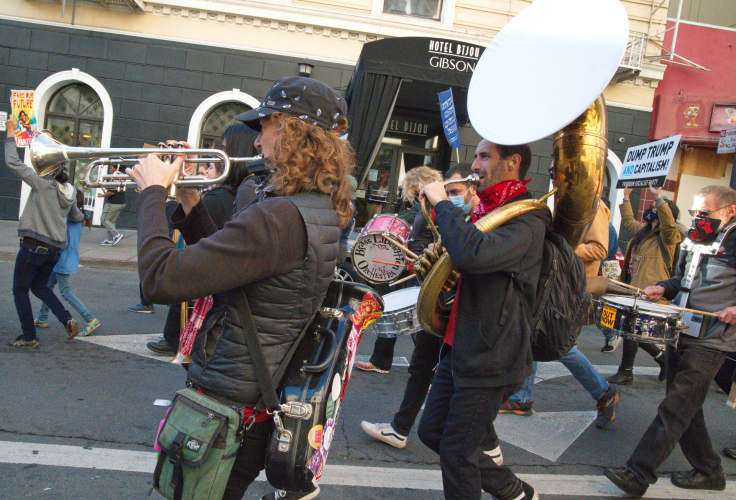 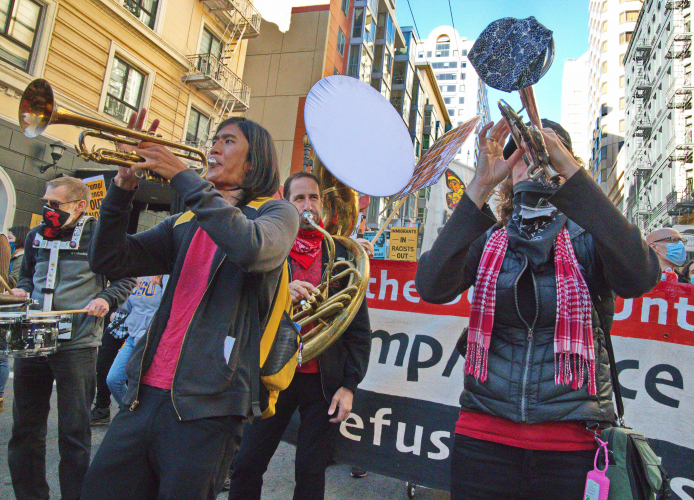 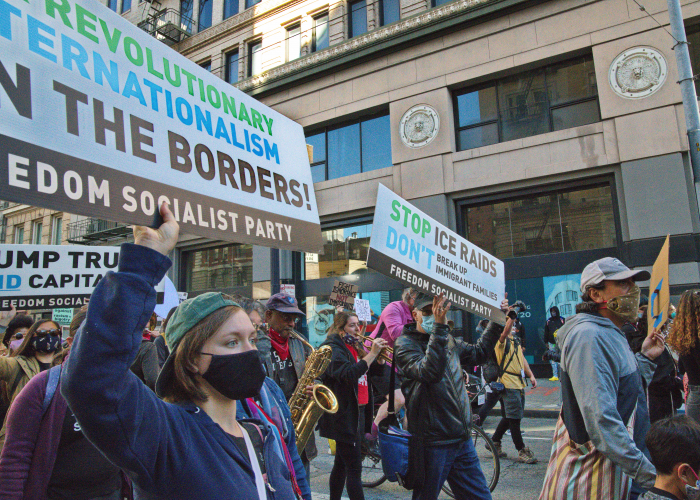 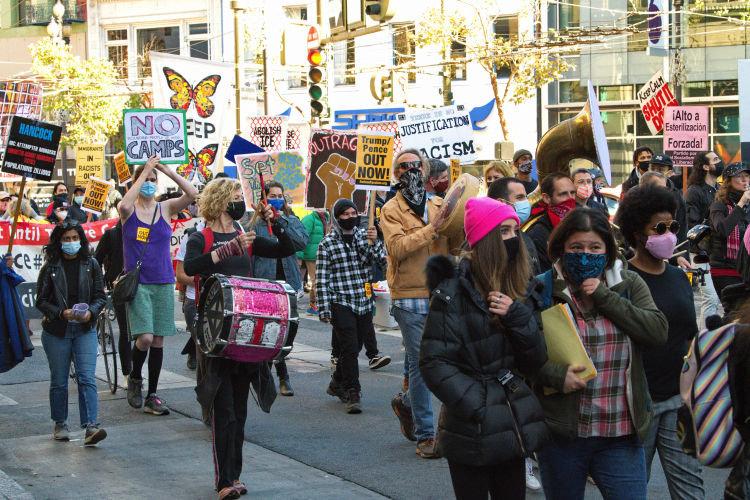 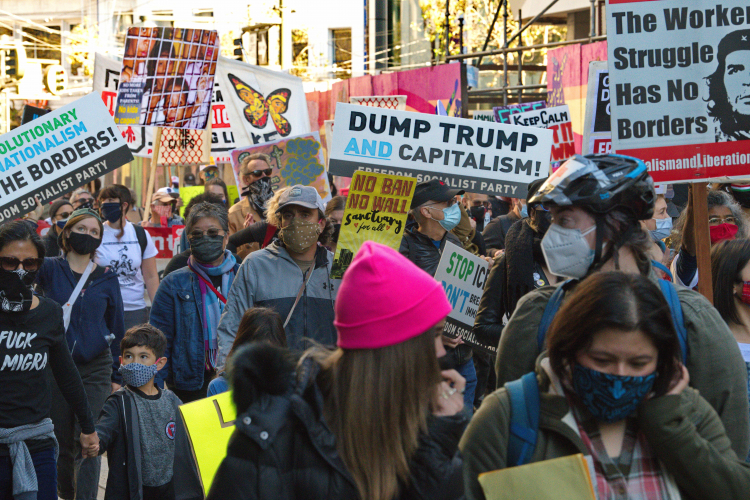 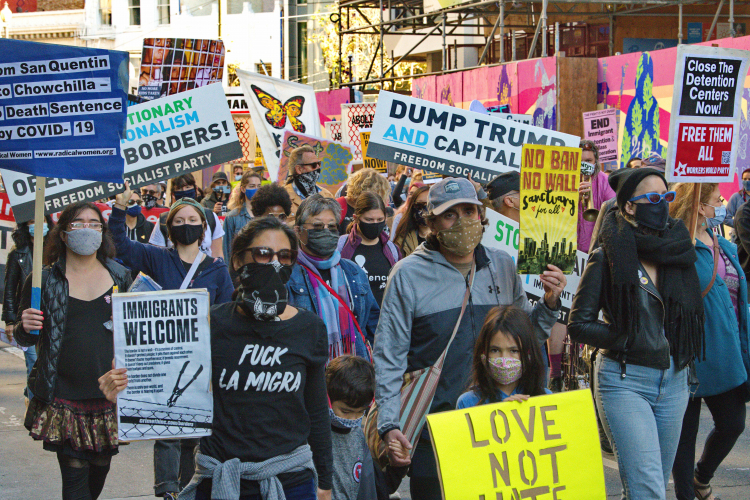 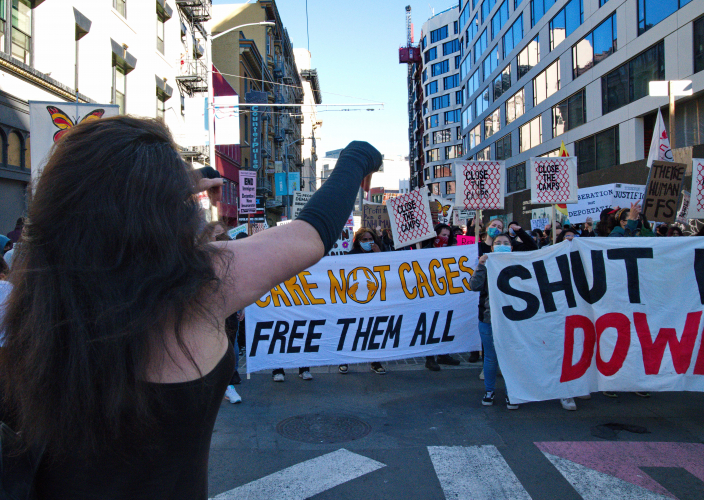 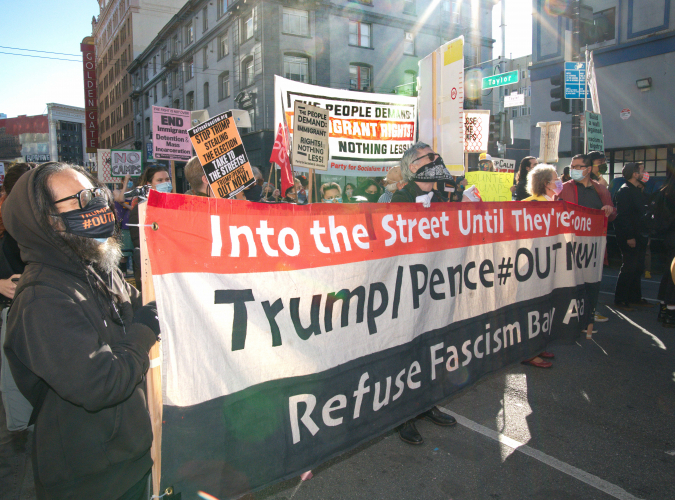 original image (7432x4859)
Add Your Comments
LATEST COMMENTS ABOUT THIS ARTICLE
Listed below are the latest comments about this post.
These comments are submitted anonymously by website visitors.