Add an Event
Newswire
Calendar
Features
Home
Donate
From the Open-Publishing Calendar
From the Open-Publishing Newswire
Indybay Feature
Related Categories: North Bay / Marin | San Francisco | Government & Elections
On the Golden Gate Bridge, the Resistance Goes On
by Celebrate But Resist
Tuesday Nov 10th, 2020 7:04 AM
Police blatantly interfered with the first amendment right to free assembly by blocking access to the Golden Gate Bridge pedestrian walkway, but about 100 made it through to rally then march for justice. Protesters were dismayed that, despite obtaining a permit, their ability to access the Golden Gate Bridge on November 7th was severely hampered. Highway exits were blocked and parking lots closed off. Nevertheless about 100 made it through police blockades to rally then march for justice across the iconic bridge.

On the day of the Biden/Harris victory, while many San Franciscans celebrated by dancing in the streets, youth activists led a protest they called "The Resistance Must Go On." Yellow umbrellas with the names of Black and brown people who were killed by the police contrasted with the bright red cloaks of protestors wearing The Handmaid’s Tale costumes.

One of the brightly colored umbrellas bore the name of Sean Monterrosa, a 22-year-old, San Francisco-raised latinx American who was killed by Vallejo police in June. Monterrosa's sisters Ashley and Michelle addressed the crowd at a rally that also featured an open mic before the march across the bridge. A second rally on the Marin side featured a calling out of the many names of the recently killed, for the list goes on and on.

Speakers said that though Biden beat Trump in the election it is not the end of racism. The Biden/Harris win is not a fix for the pandemic nor for the horrible state of affordable health care in the nation. Women's right to reproductive freedom is in danger. Biden's win is a very good thing but the resistance must go on.
§Our Mail-In Votes Helped Stop Fascist Trump
by Celebrate But Resist
Tuesday Nov 10th, 2020 7:04 AM 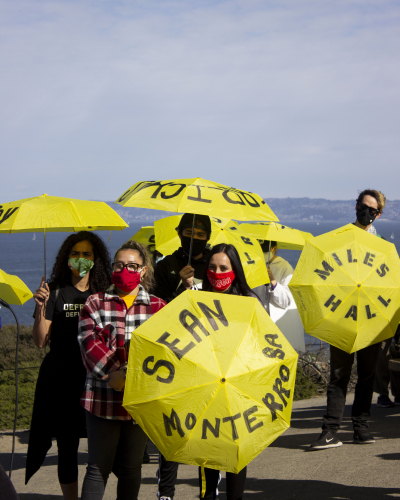 original image (3456x4320)
Ashley and Michelle shared deep emotions and told people who enjoy privilege: don't be our allies, be our accomplices!
§On the bridge
by Celebrate But Resist
Tuesday Nov 10th, 2020 7:04 AM 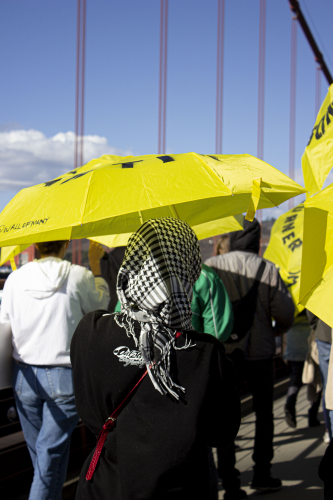