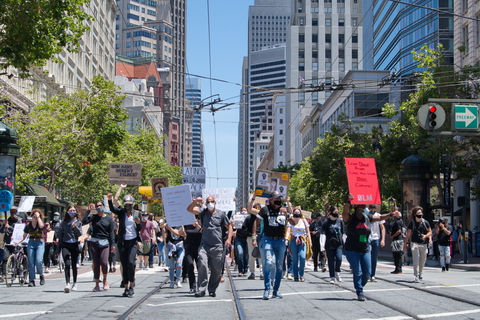 Juneteenth, also known as Liberation Day and Emancipation Day, commemorates June 19, 1865, the day when the Union army reached Galveston, Texas, and pronounced that all enslaved peoples in the United States were finally free. This year, as George Floyd protests continue across the country, Juneteenth reached a new level of prominence in the ongoing struggle for justice and equality for African Americans.

Among the many Bay Area protests was a march from the San Francisco Embarcadero building to a rally at City Hall. After speeches and 8 minutes and 46 seconds of silence, nearly a thousand marchers proceeded down Market Street to City Hall.

In Oakland, the ILWU shut down the port along with others up and down the West Coast. Thousands marched from the port to Oakland police headquarters and then rallied in front of City Hall. Numerous other marches and rallies were held in Oakland. Santa Cruz and other Northern California cities marched in large numbers as well. In Palo Alto and Fresno, protesters painted "BLM" and "Black Lives Matter" in huge letters in the street in front of their City Halls.

Ferry Building to City Hall and Beyond: March for Freedom and Justice in San Francisco

Time To Shut It Down! A Day Of Action & ILWU Juneteenth At Port Of Oakland |

Shut The World Down! Boots Riley At 2020 Juneteenth At Oakland Oscar Grant Plaza |

Juneteenth to Allegiance: March with us to City Hall!

Juneteenth Film Discussion of 'Suppressed: The Fight To Vote'