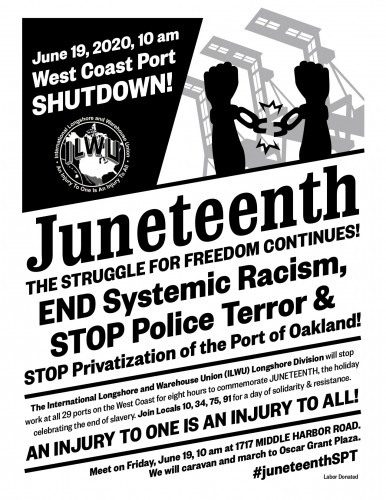 https://www.thenation.com/article/economy/dockworkers-union-shutdown-george-floyd/
One of the most radical antiracist unions in the country makes a show of solidarity with all those threatened by police violence and exploitation.
By Daniel Boguslaw
TODAY 4:19 PM

On June 19th, members of the International Longshoremen and Warehouse Union (ILWU) will shut down 29 ports across the West coast in solidarity with ongoing protests over the murder of George Floyd. The day of action is slated for Juneteenth, the day celebrating the heralding of the emancipation proclamation to Texan slaves more than two years after the proclamation took effect in 1863.

Since its founding in 1937, the ILWU has endured as one of the most radical antiracist unions in the country. It was one of the first American unions to desegregate work gangs in the 1930s and during the 1940s it publicly agitated against the internment of Japanese Americans. During the civil rights movement of the 1960s the ILWU led organizing drives and even inducted Martin Luther King as an honorary union member after he spoke to members of San Francisco’s Local 10 in 1967.

In recent years the union has protested the wars in Iraq and Afghanistanwith similar work stoppages and refused to unload containers from an Israeli-owned ship in protest of the killing of Palestinians at the hands of the IDF. In maintaining its commitment to racial justice, the ILWU also shut down ports in 2010 over the police killing of Oscar Grant.

But despite the ILWU’s recent and historic stance on racial justice, increasingly anti-labor rulings from the National Labor Relations Board have meant that the decision to stop work is always fraught with debates over the legal repercussion of escalation. In March, a Portland judge ruled against the ILWU for millions in damages in response to an extended slowdown campaign against terminal operator ICTSI in Portland, Oregon that began in 2012. The award of $19 million in damages comes to more than twice the ILWU’s total assets and has many worried that it could potentially bankrupt the union, especially as ICTSI seeks a new trial for even more damages.

For now, the shutdown is scheduled to overlap with a coastwide ILWU stop-work meeting, a tactic that falls within protections afforded by the union contracts. The longshore workers intend to use their day of action to call on other unions to stand in solidarity with all those threatened by police violence and exploitation.

Efforts are underway to coordinate with East coast dock workers in the International Longshoreman’s Association (ILA) in an effort to organize the first dual-coast port shutdown in American history, and ILWU members are hoping their shutdown will inspire inland unions to join forces as well.

The potential for a bicoastal shutdown goes beyond a symbolic gesture of worker solidarity against police brutality. Estimates predict the hit to American GDP from a five-day west coast shutdown at almost $10 billion. If the shutdown spread to the East Coast, that number could rise substantially.

Jack Heyman, a former longshoreman and one of the lead organizers of the shutdown protesting the wars in Iraq and Afghanistan, points out that the planned action is part of ILWU’s long history of standing against police violence. Dock workers have maintained this commitment since the murder of labor activists sparked the bloody waterfront strike of 1934—a moment in American labor’s militant history that recalls similar scenes of police violence coming out of Seattle and the Bay Area in recent weeks.

“Black and brown union lives have always been targeted by the police. In fact, if you look at ILWU locals’ bylaws, many of them explicitly ban police from membership. That’s because the police have always been used as tools in the fight against the working people of this country,” Heyman said.

Since George Floyd’s murder, the planned ILWU shutdown is one of the highest profile labor actions to take shape. It follows on the heels of unionized bus drivers in Minneapolis and New York City refusing to transport arrested protesters, and also serves as a significant escalation at a time when some of the largest and most powerful unions—in addition to the AFL-CIO—are facing progressive challenges to long-entrenched moderate leadership.

At the Teamsters, the O’Brien/Zuckerman ticket is running to unseat the IBT dynasty now led by James Hoffa. At the AFL-CIO, Sara Nelson, president of the Association of Flight Attendants (AFA), is gearing up for a potential run against Richard Trumka, who has refused calls to disaffiliate police unions from the AFL-CIO.

“It’s fantastic that longshoremen are standing together to make it clear that racial injustice is directly tied to the injustices of all workers in this country. There’s no more critical time than right now for labor to stand together and force change,” Nelson said. On Friday, the AFA passed a resolution calling for sweeping police reforms and the removal of law enforcement from the labor movement should they fail to comply.

Keith Shanklin, the first black president of ILWU local 34 in Oakland, came together with the historically militant locals 10, 75, and 91 to organize the Juneteenth stoppage. “Right now, workers have more power than a lot of people in this country understand,” Shanklin said. “That’s why we are going to put that power on display: to raise the voices of labor, and to raise the voices of black people in this country. To demand and return justice for George Floyd.”

ILWU, ILA, and Teamsters Take Action in Honor of George Floyd
TOWARD A PEOPLE'S STRIKE IN SOLIDARITY

FRANCES MADESON
June 9, 2020
Today members of the International Longshore and Warehouse Union (ILWU), the International Longshoremen’s Association (ILA) and the International Brotherhood of Teamsters laid down their tools in a work stoppage for eight minutes and forty-six seconds, the precise measure of time that George Floyd, handcuffed and helpless to resist, was forced to endure a policeman’s lethal knee on his neck. Killed by Minneapolis police on May 25, Floyd was buried today in Houston.
Trent Willis, president of ILWU Local 10, Keith Shanklin, president of ILWU Local 34, and Gabriel Prawl, former Secretary/ Treasurer of ILWU Local 52 in Seattle, all members of ILWU’s Committee Against Police Terror, conceived of bringing this powerful gesture into union workplaces as a way of honoring Floyd, who earned his livelihood as a truck driver and security guard. In connecting Floyd’s struggle for his last breath with workers’ struggles for survival in a drastically altered post-pandemic economy, they hope to point the way forward by demonstrating the power of the working class.
“Longshore workers probably understand capitalism better than anyone else,” said ILWU Spokesman Clarence Thomas. “If the cargo doesn’t come off the ship, that’s merchandise not sold. Stopping work for eight minutes and forty-six seconds is not a symbol, it’s an act that demonstrates the leverage of the working class.”
This is an important step because “the only way that we’ve been able to get any kind of concessions from the bosses is through withholding our labor.”

ILWU local 10 president Trent Willis and ILWU Local 34 president Keith Shanklin on 6/8/20 talk about the lynching of George Floyd and how they personally and Black longshore workers have been effected by the reign of terror.

They also talk about what workers and labor need to do to fight back and stop the systemic racism.

Their unions have set up a Committee Against Police Terror and Systemic Racism. and the ILWU will be shutting down all west coast docks on Juneteenth which is on June 19th. They are calling on all other workers and unions to take action on June 19th.
This interview was done by Steve Zeltzer of WorkWeek on 6/8/2010


END_OF_DOCUMENT_TOKEN_TO_BE_REPLACED
Added to the calendar on Fri, Jun 12, 2020 11:45AM
§MLK Is Honorary Member Of ILWU Local 10
by Committee to Stop Police Terror and End Syste 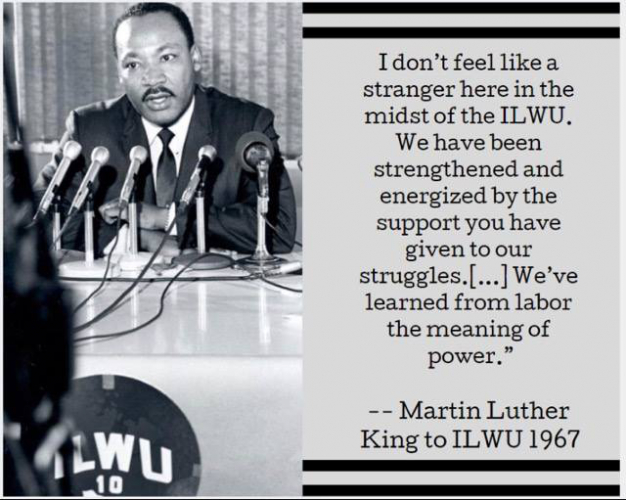 original image (640x511)
Martin Luther King was came to ILWU Local 10 and was made an honorary member by the local.
END_OF_DOCUMENT_TOKEN_TO_BE_REPLACED
§Stop Police Terror ILWU Banner On May Day 2015
by Committee to Stop Police Terror and End Syste 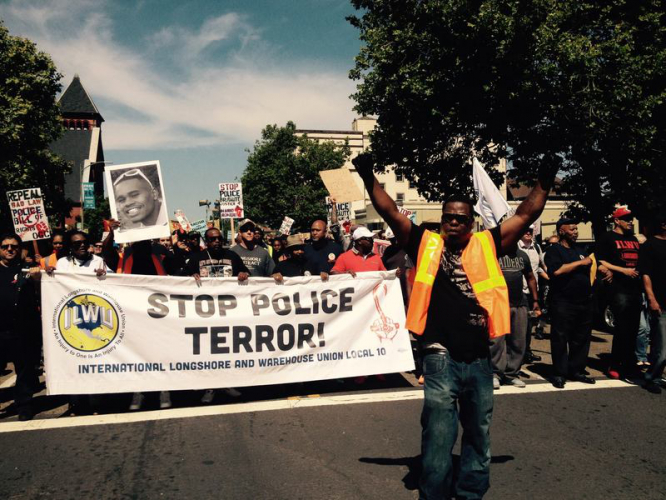 original image (800x600)
The ILWU Local 10 banner "Stop Police Terror" on May Day 2015
END_OF_DOCUMENT_TOKEN_TO_BE_REPLACED
Add Your Comments
Support Independent Media
We are 100% volunteer and depend on your participation to sustain our efforts!