Add an Event
Newswire
Calendar
Features
Home
Donate
From the Open-Publishing Calendar
From the Open-Publishing Newswire
Indybay Feature
Related Categories: East Bay | Labor & Workers
Time To Shut It Down! A Day Of Action & ILWU Juneteenth At Port Of Oakland
by Labor Video Project
Saturday Jun 20th, 2020 1:56 PM
The ILWU initiated Committee Against Police Terror and Systemic. Racism rallied at the Port of Oakland on Juneteenth which is June 19, 2020. At the Port a rally was held before the march. 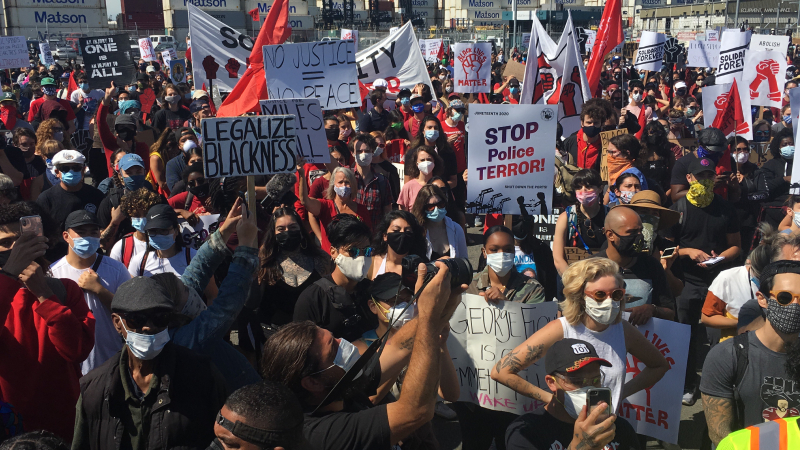 original image (3412x1920)
The ILWU on Juneteenth 2020 stopped work and thousands rallied at the Port of Oakland on June 19, 2020. Speakers talked about the fight against police terror and systemic racism. They then marched to Oscar Grant Plaza in downtown Oakland for another rally.

The Committee To Stop Police Terror and Systemic Racism initiated by the ILWU organized the rally and all West Coast ports including Vancouver, B.C. Canada were shutdown in protest against the murder of George Floyd and the thousands of other Black and Brown people who been brutalized and murdered. Speakers also talked about the effort to privatize and destroy the port by billionaire John Fisher who owns the GAP and the A's.

All Out On Juneteenth! "An Injury to One Is An Injury To All" ILWU Juneteenth Press Conference
https://www.youtube.com/watch?v=nWYn9GuByWg

The rally and march was sponsored by
The Committe To Stop Police Terrorism and Systemic Racism
https://www.juneteenthspt.com

JUNE 18, 2020
by ANNA M. HENNESSEY
“San Francisco and the Bay Bridge” by ATIS547 is licensed under CC BY-NC-SA 2.0.
Doris Fisher, who is a KIPP Charter School founder, and her sons (Robert, John, and William) are currently using their money to dismantle the public school system in San Francisco and take public land in Oakland. The main people affected by the Fisher’s privatization are low-income minorities.

The billionaire Fisher family from San Francisco is part of a dark money group known as “Americans for Job Security” that supported Republicans with millions of dollars in the 2010 midterm elections and the 2012 presidential election. Other prominent donors to the fund include right-wing supporter, Charles Schwab, who has donated significant funds to back Donald Trump and pay Trump’s legal fees, as well as the DeVos family. Betsy DeVos, Donald Trump’s Secretary of Education, is well known for her strong support of the charter school movement across the country.

Both the Black Lives Matter and the NAACP have raised alarms about charter school growth in California and elsewhere, emphasizing how charter privatization of schools in the US is a deep problem for social justice.

In the meantime, Doris Fisher’s son John is head of a movement to turn the Port of Oakland into thousands of $1 million dollar condos to finance a project known as the Howard Terminal Project. That project includes construction of a new ballpark for the Oakland A’s. John Fisher owns the A’s. The Port of Oakland includes miles of waterfront property with public parks traditionally serving Oakland, a city and community with a large minority population.

The Juneteenth event in Oakland this coming Friday 6/19 is devoted to stopping police terror and ending systemic racism, as well as to stopping privatization of our public spaces, including the Port of Oakland.

Racism is about physical violence to human bodies. But it is also about the insidious ways in which the wealthy steal land and resources from minority populations. 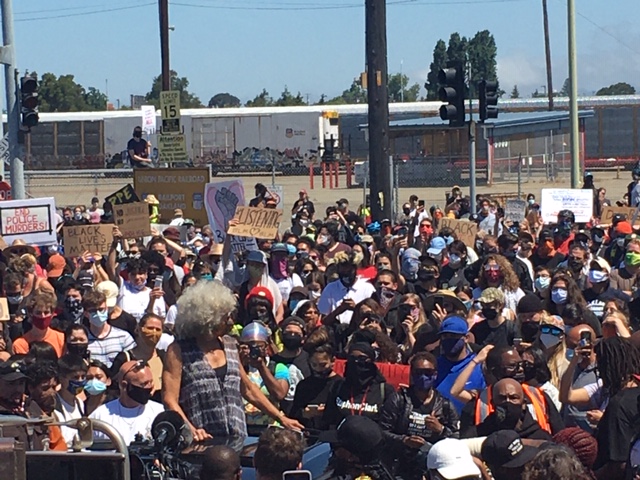 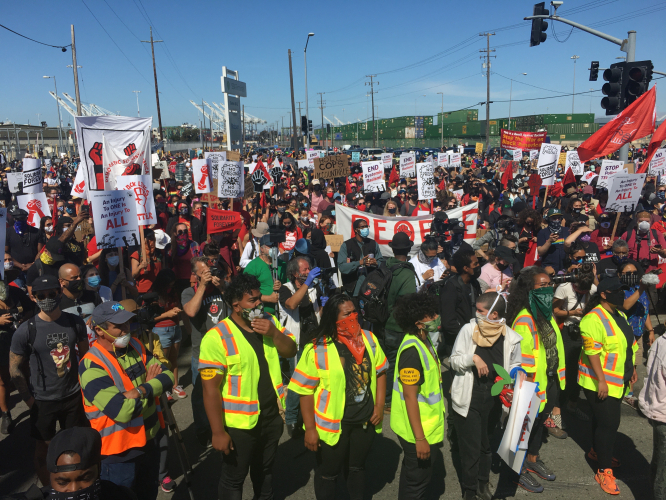 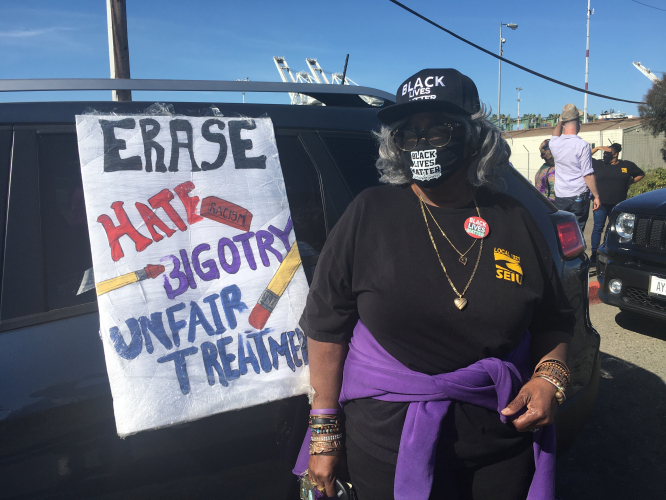 original image (4032x3024)
Brenda Barros, SEIU 1021 SF General Hospital chapter chair attended the rally and spoke out about the systemic racism by the City and County of San Francisco.
https://youtu.be/wzTUdzFfpkw
§Silence Is Not An Option
by Labor Video Project
Saturday Jun 20th, 2020 1:56 PM 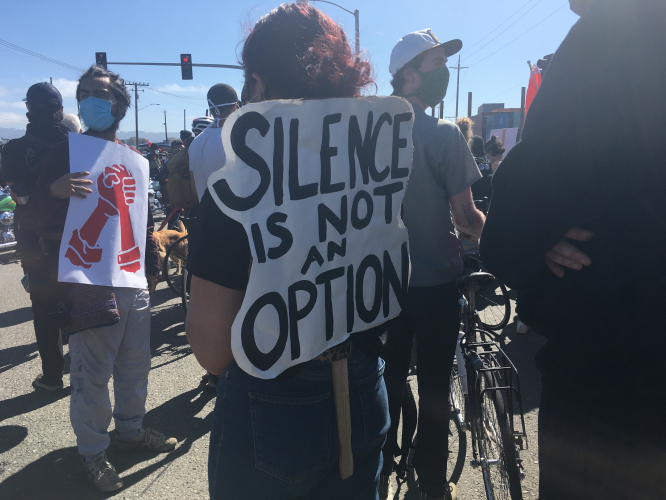 original image (4032x3024)
Over 10,000 participated in the rallies and march. Silence Is Not An Option
https://youtu.be/wzTUdzFfpkw
§Two Teachers Joined The Rally
by Labor Video Project
Saturday Jun 20th, 2020 1:56 PM 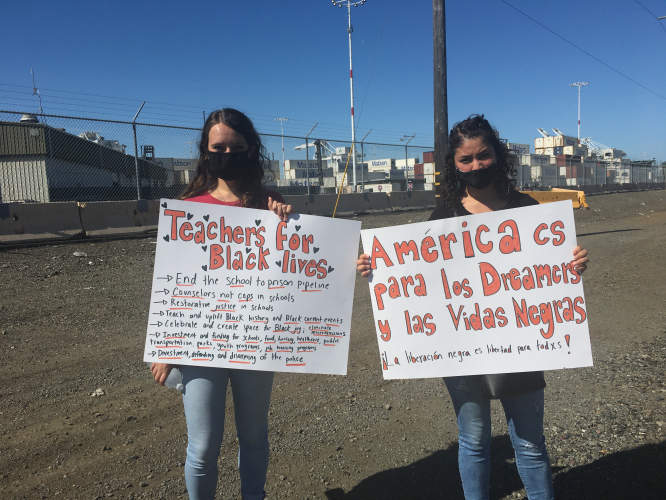 original image (4032x3024)
Two teachers from the South Bay joined the rally and spoke out about. the issues of Black and Latino students.
https://youtu.be/wzTUdzFfpkw
Add Your Comments
Support Independent Media
We are 100% volunteer and depend on your participation to sustain our efforts!