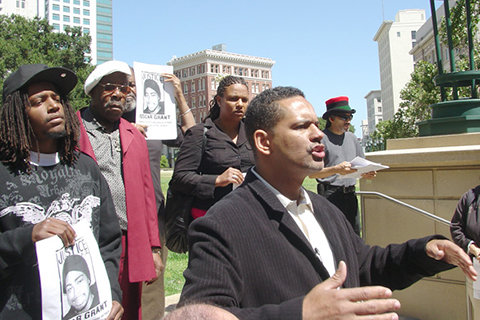 Born and raised in San Francisco, Tony Coleman led a successful campaign to get a killer cop fired from the SFPD for the murder of Aaron Williams. Tony cofounded the Third Eye Movement and was instrumental in the local fight against Prop 21.

After being gentrified out of San Francisco, Tony made his mark in West Oakland supporting arts and community. Tony fought against gang injunctions and was a key organizer in the Justice for Oscar Grant Movement. Tony built up unused storefronts by the BART tracks on 7th Street and founded One Fam, Bikes 4 Life, and the 7th Street Rev Cafe.

Tony passed away on September 23 after a battle with cancer. He leaves behind his son Tony Jr and a long list of friends and comrades.

Read more about Tony and view photos below. Hear him in his own words in video and audio in this collection of posts on Indybay:

Celebrating the Life of Tony Coleman |

March and Rally in Solidarity with Renisha McBride |

Town Hall for Justice Responds to Mehserle's Involuntary Manslaughter Verdict, 7/10/10: audio | Why the Spin Regarding "Outsiders" Protesting the Mehserle is Bullshit (and Illogical) |

The People vs. Johannes Mehserle: Days 6 & 7 of the Preliminary Hearing |

Town Hall Covers Mehserle Case and Recall of Orloff, Oakland, 3/21/09: photos and audio | All of Us or None and City of San Francisco Find Common Ground To End Discrimination |