Add an Event
Newswire
Calendar
Features
Home
Donate
From the Open-Publishing Calendar
From the Open-Publishing Newswire
Indybay Feature
Publish to Newswire
Add an Event
Related Categories: East Bay | Police State & Prisons | Racial Justice
Gone But Not Forgotten - Justice for Oscar Grant! Community Gathering: audio & photos
by dave id
Thursday Jan 7th, 2010 2:27 PM
On January 1st, 2010, the first anniversary of the murder of Oscar Grant III by BART police officer Johannes Mehserle, family members organized a vigil at the Fruitvale BART station where Oscar was shot and killed. Community activists, organized as the General Assembly for Justice for Oscar Grant, planned for a rally at the Fruitvale station to commence at the conclusion of the vigil and a cultural gathering for the evening at the Humanist Hall in Oakland. This is the third of three posts on anniversary events and includes full audio from the evening community gathering.
Listen now:
Copy the code below to embed this audio into a web page:
Download Audio (67.8MB) | Embed Audio
(audio 3:17:28)

The gathering at the Humanist Hall was the event of the day that most incorporated youth and all spectrums of the community of Oakland residents interested in justice for Oscar Grant. There were no pre-conditions on what could or could not be said at the event.

In a disruptive move by the Oakland Police Department, several armed OPD officers with "Negotiator" labels on their backs entered the Humanist Hall before speakers and performers began. OPD walked through the venue and around the grounds out back. Everyone inside the crowded hall got incredibly edgy with their presence. OPD then agreed to stay across the street from the venue throughout the evening, apparently satisfied with their recon mission through the building and back yard.

Once the last of the OPD interruptions were done with, the show began. Organizer headcounts showed nearly 200 people present at one point, not counting those who came and went through the night. An alter to honor Oscar Grant was set up inside the hall. There was an exhibit of photos from early 2009 by Keba Konte, and there was live art by Desi, including the creation of two paintings of Oscar Grant during the event. The program included multi-faith representatives, performing artists, speakers, and a couple of videos shown on a big screen.

While it was a long road getting to the Humanist Hall community gathering, and some bitter feelings linger about obstacles thrown in the way of organizing efforts, the event itself was highly successful and organizers hope to host similar events and other actions for justice in the future.


Thanks to the good folks at the Humanist Hall for sticking up for the event despite pressure to not allow it to happen. Thanks to Uhuru Solidarity Oakland for providing the yummy vegan chili and cornbread. Personal thanks to Ray Jax for the very thorough notes on the evening line-up of speakers and performers. 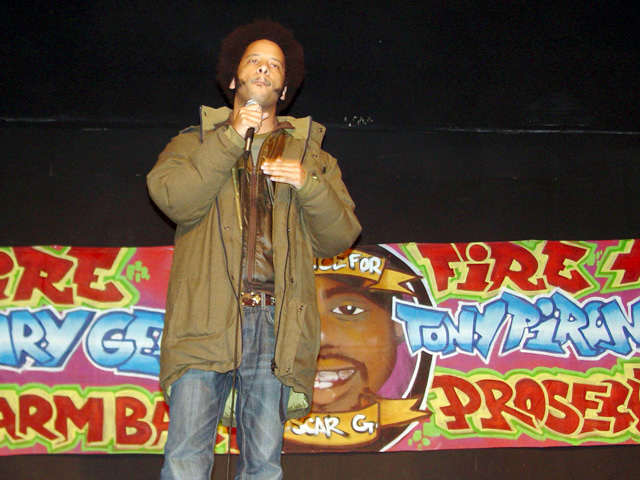 I raise this glass for the ones who die meaningless... 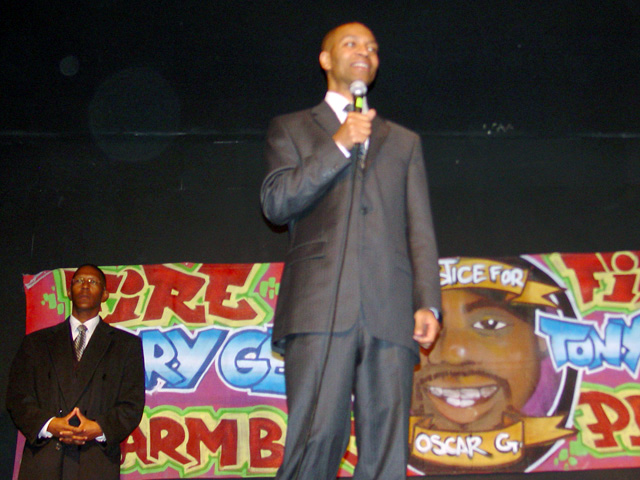 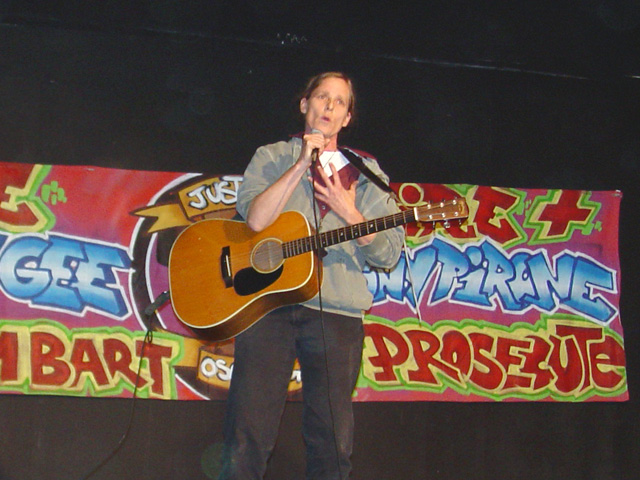 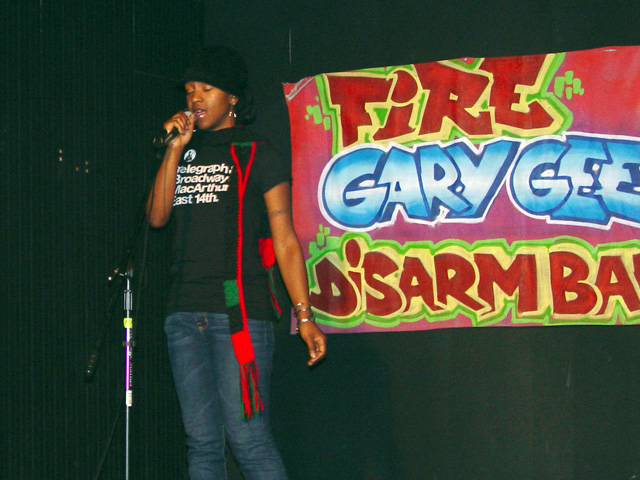 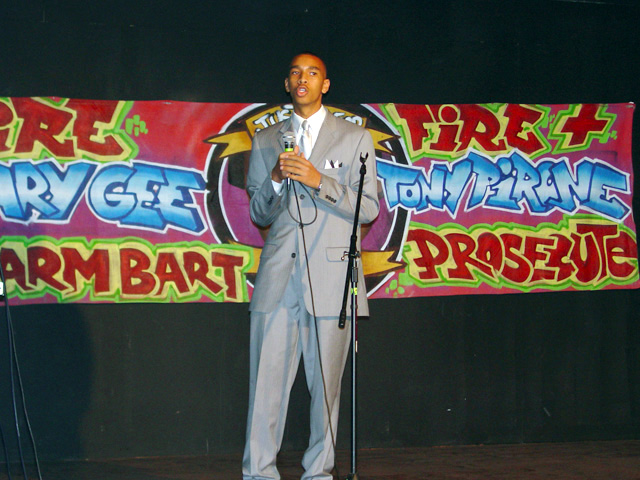 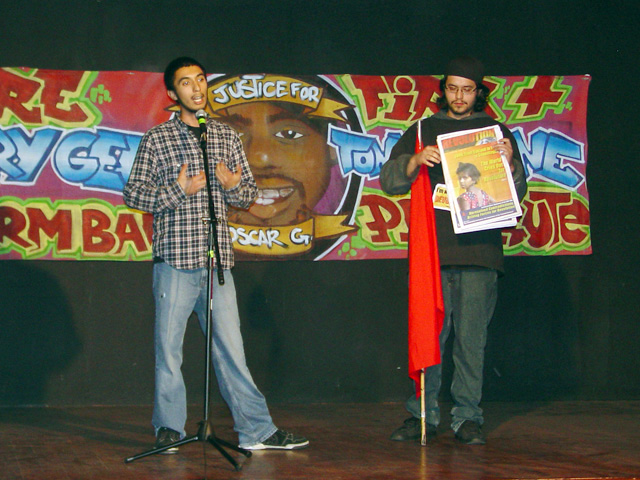 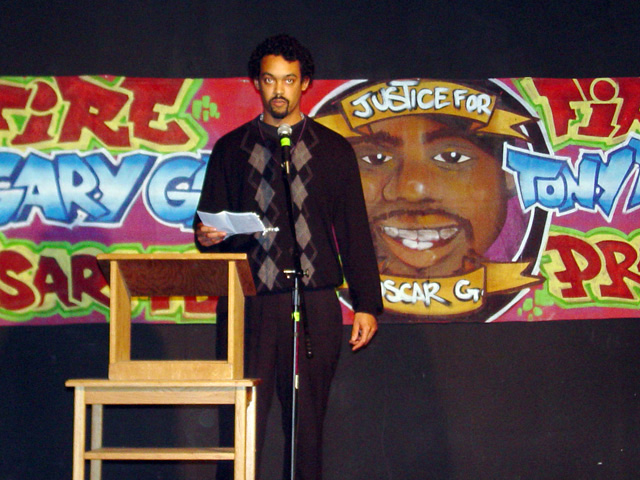 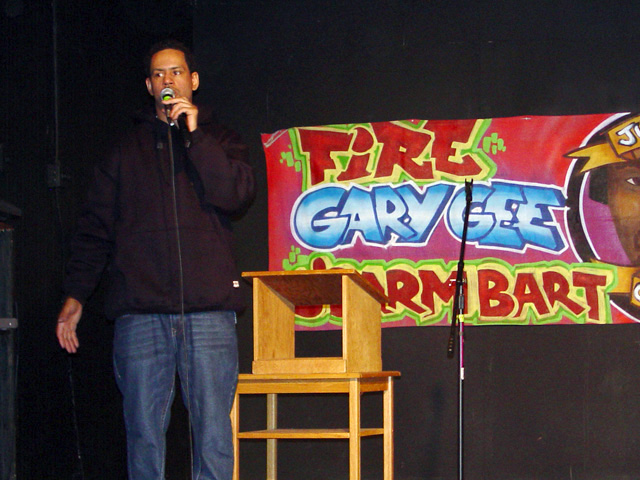 http://indybay.org/oscargrant
§Franchise, on mic, of Silence the Violence, and director of Green Media
by dave id Thursday Jan 7th, 2010 2:27 PM 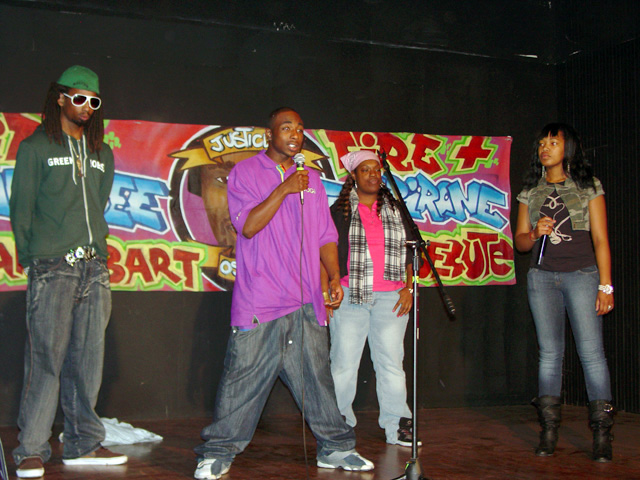 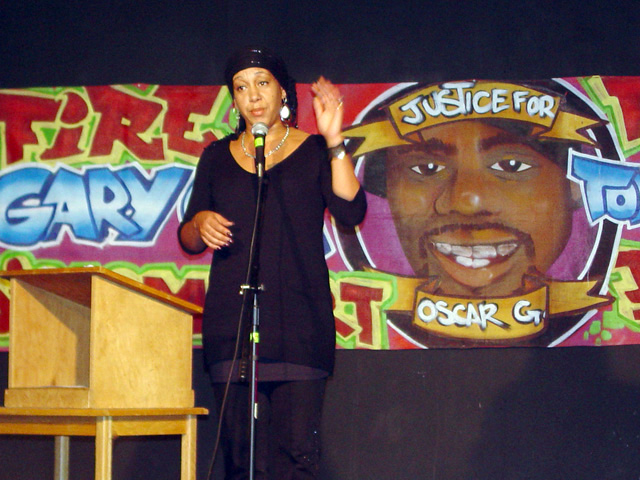 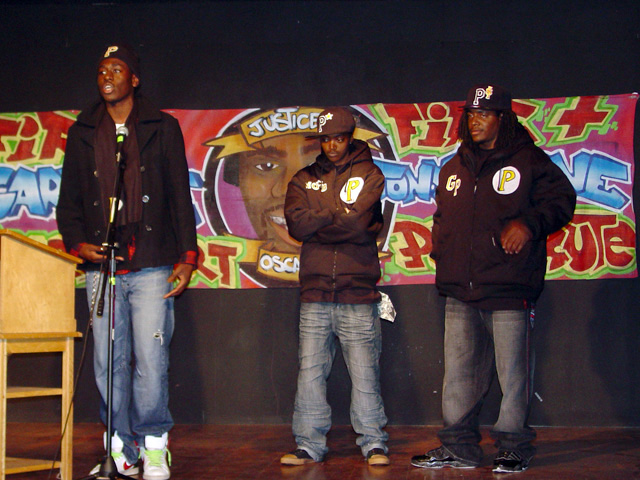 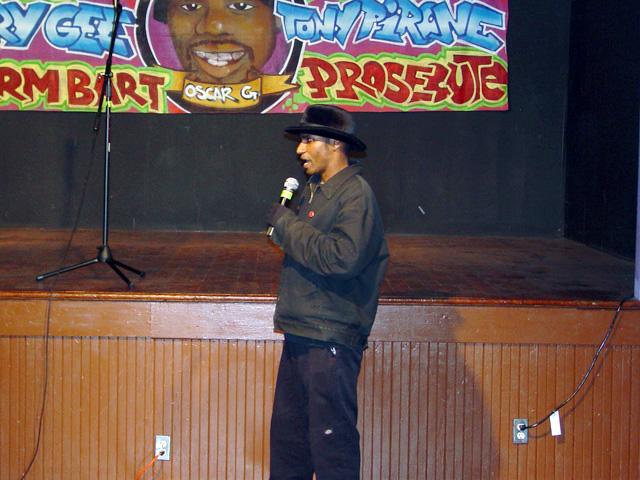 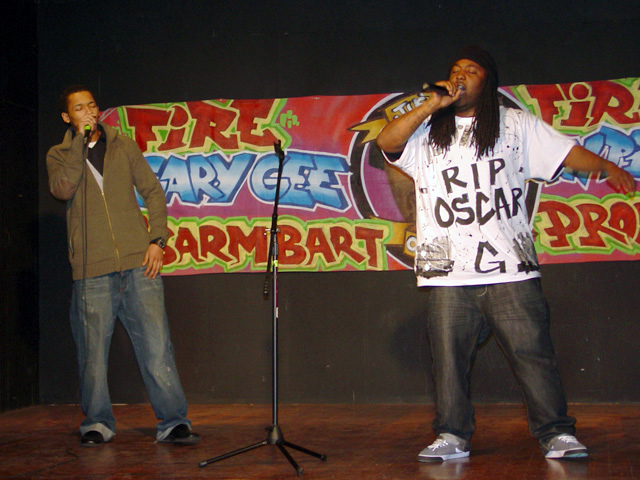 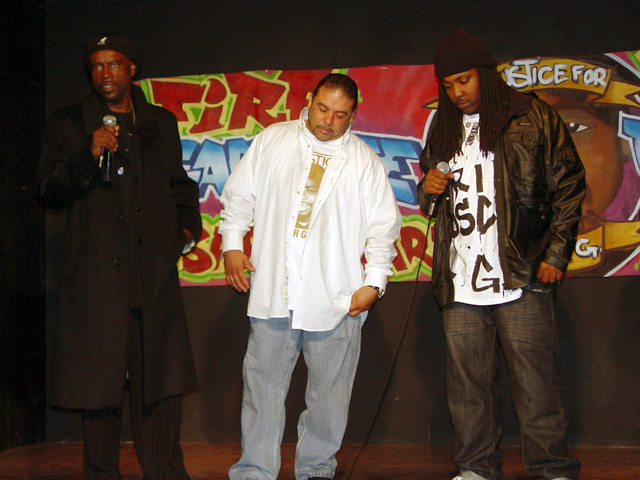 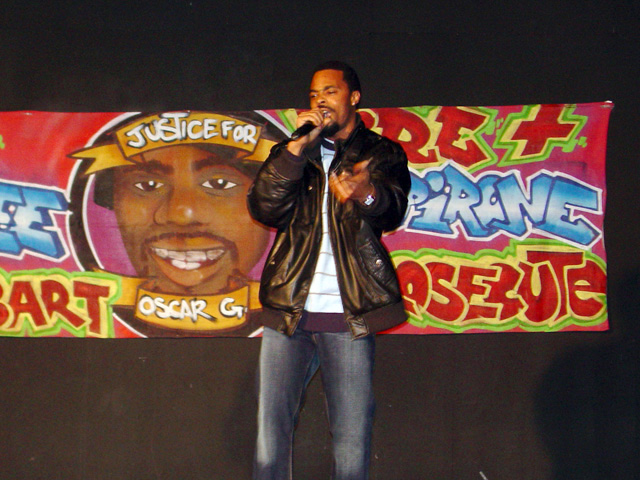 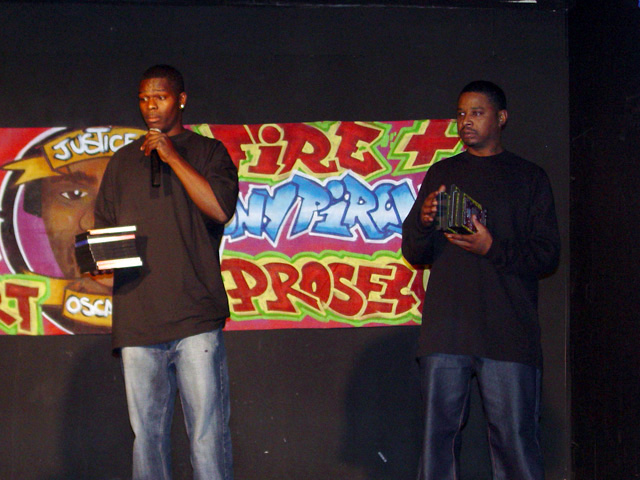 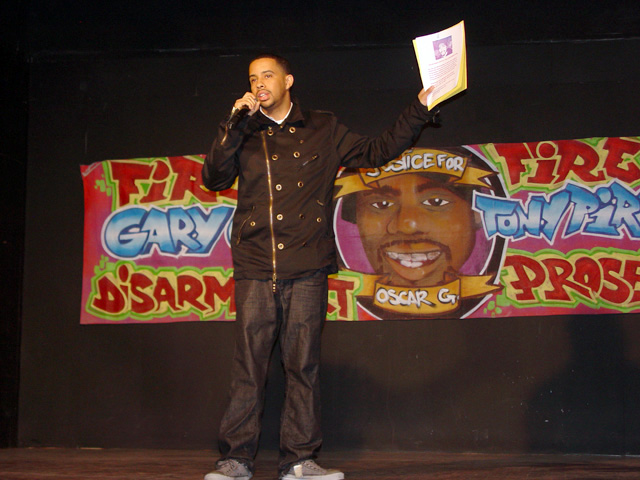 Ise Lyfe is the founder of Scholorship Fund for artists, grades 6th-12th, to help them produce a wide variety of works against police brutality. Scholarship recipients are also eligible for other non-cash resources and support. For more, email workshop [at] teacher.com. Ise Lyfe has also set up a specific $4000 individual scholarship in the name of Oscar Grant III.
http://indybay.org/oscargrant
§Be Janky of local rap group Trunk Boiz
by dave id Thursday Jan 7th, 2010 2:34 PM 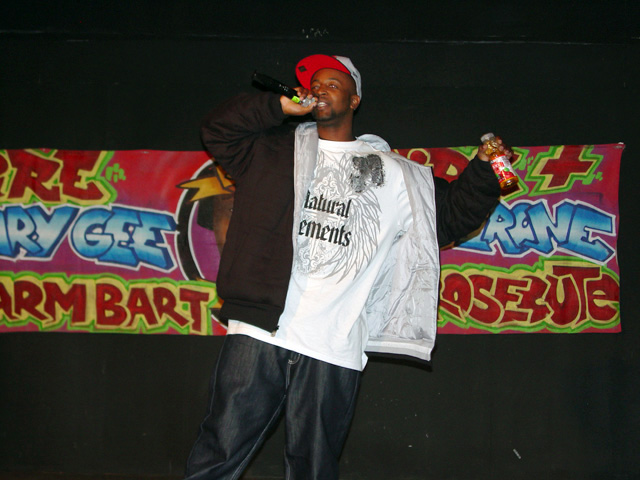 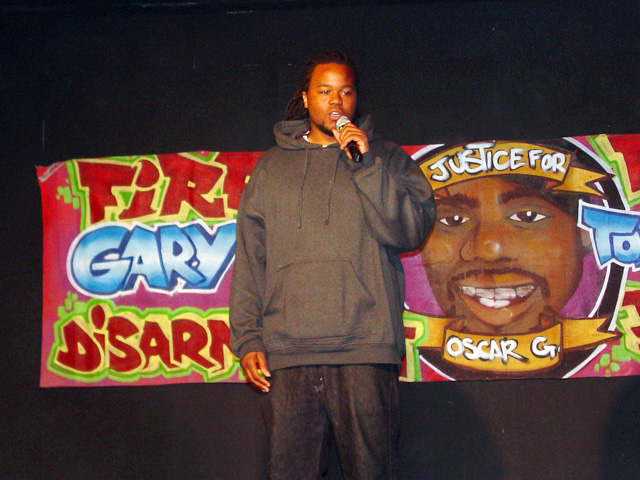