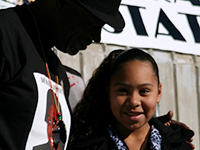 Family and friends remembered Oscar Grant during a January 1st, 2013 vigil at the Fruitvale BART Station where his life was taken New Year's Day 2009. Four years after his murder by BART police officer Johannes Mehserle, Oakland has not forgotten Grant. Despite BART's expectations of a small crowd, over 150 people came out in Grant's memory.

Indybay Archive of the Justice for Oscar Grant Movement