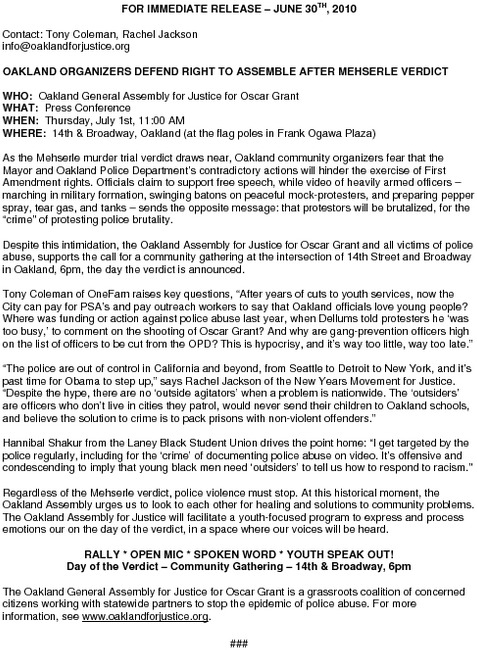 WHO:  Oakland General Assembly for Justice for Oscar Grant
WHAT:  Press Conference
WHEN:  Thursday, July 1st, 11:00 AM
WHERE:  14th & Broadway, Oakland (at the flag poles in Frank Ogawa Plaza)

As the Mehserle murder trial verdict draws near, Oakland community organizers fear that the Mayor and Oakland Police Department’s contradictory actions will hinder the exercise of First Amendment rights. Officials claim to support free speech, while video of heavily armed officers – marching in military formation, swinging batons on peaceful mock-protesters, and preparing pepper spray, tear gas, and tanks – sends the opposite message: that protestors will be brutalized, for the “crime” of protesting police brutality.

Despite this intimidation, the Oakland Assembly for Justice for Oscar Grant and all victims of police abuse, supports the call for a community gathering at the intersection of 14th Street and Broadway in Oakland, 6pm, the day the verdict is announced.

Tony Coleman of OneFam raises key questions, “After years of cuts to youth services, now the City can pay for PSA’s and pay outreach workers to say that Oakland officials love young people? Where was funding or action against police abuse last year, when Dellums told protesters he ‘was too busy,’ to comment on the shooting of Oscar Grant? And why are gang-prevention officers high on the list of officers to be cut from the OPD? This is hypocrisy, and it’s way too little, way too late.”

“The police are out of control in California and beyond, from Seattle to Detroit to New York, and it’s past time for Obama to step up,” says Rachel Jackson of the New Years Movement for Justice. “Despite the hype, there are no ‘outside agitators’ when a problem is nationwide. The ‘outsiders’ are officers who don’t live in cities they patrol, would never send their children to Oakland schools, and believe the solution to crime is to pack prisons with non-violent offenders.”

Hannibal Shakur from the Laney Black Student Union drives the point home: “I get targeted by the police regularly, including for the ‘crime’ of documenting police abuse on video. It’s offensive and condescending to imply that young black men need ‘outsiders’ to tell us how to respond to racism.”

Regardless of the Mehserle verdict, police violence must stop. At this historical moment, the Oakland Assembly urges us to look to each other for healing and solutions to community problems. The Oakland Assembly for Justice will facilitate a youth-focused program to express and process emotions our on the day of the verdict, in a space where our voices will be heard.

The Oakland General Assembly for Justice for Oscar Grant is a grassroots coalition of concerned citizens working with statewide partners to stop the epidemic of police abuse. For more information, see www.oaklandforjustice.org.

END_OF_DOCUMENT_TOKEN_TO_BE_REPLACED
Added to the calendar on Wed, Jun 30, 2010 3:40PM
Add Your Comments
Latest Comments
Listed below are the latest comments about this post.
These comments are submitted anonymously by website visitors.
TITLE
AUTHOR
DATE
WHAT WOULD HAPPEN IF OSCAR WAS WHITE AND MURDERED BY A BLACK POLICE OFFICER
OMASI
Guns Don't Kill People COPS (Criminals On Patrol) do.
Guns don't Kill People, COPS do
Support Independent Media
We are 100% volunteer and depend on your participation to sustain our efforts!