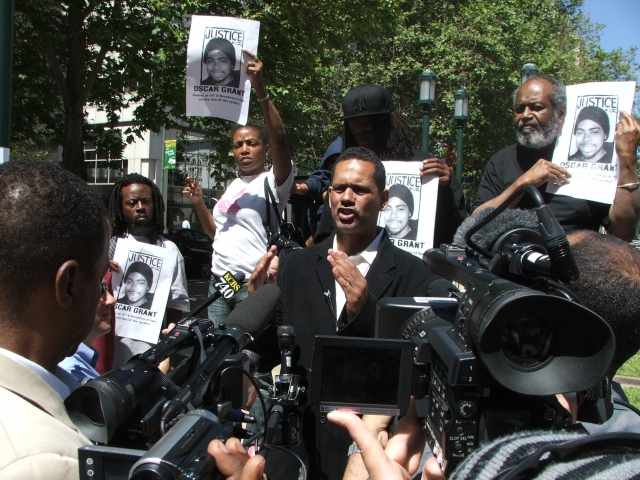 OAKLAND, CA – Activists in the movement for justice for Oscar Grant are organizing a mass gathering and speak-out for the evening of the day in which the verdict in the murder trial of BART Police Officer Johannes Mesherle is announced. The jury in the case, which is being tried in Los Angeles, is expected to be sent out to deliberate on Friday and a verdict could come down anytime after that.

Organizers are asking people to come to Broadway and 14th Street in downtown Oakland, at 6 pm the day of the verdict. They are demanding that the Oakland Police Department (OPD) not “over-react”.

A press conference was held at that same location on Thursday, July 1, at 11 am. It was called by the Oakland General Assembly for Justice for Oscar Grant.

Tony Coleman, of One Fam, and the New Year's Movement for Justice for Oscar Grant, began the press conference by speaking personally. “My son was Oscar Grant's teammate,” said Coleman. “He's 22 years old. He's a Black young man. It could have been him on the BART. I'm proud of my son for coming out here and, feeling angry enough, and feeling enough passion and compassion, to come out here and stand want to stand with the people.”

“We're asking all the people, if you feel that way, don't pent it up inside. Come out here. We're providing a space,” said Coleman.

“It's an alternative to other forms of expression. So, if you want to go out and do other things and all like that, that's on you, but if you want to come out and participate in a speak-out, and deal with other brethren about what we can do to move forward, then come out here to 14th and Broadway,” said Coleman.

Coleman said that it will be organized as a speak-out and a sharing of ideas to determine what are the next steps forward for justice for Oscar Grant and his family.

He warned that some non-profits are spreading the wrong message about protests following the verdict.

Responding to talking points being circulated as a message from the City of Oakland, Coleman said that, “the City is paying certain non-profits to spread this hysteria about violence...All the talking points, all six of them, are about property damage...about what the young people are gonna do, not the violence cops gonna continue to do, if this officer is found not guilty.”

Also speaking at the press conference were Micheal Walter and Tony Shaw, who reported on their experience attending part of the Mesherle trial in L.A.; Reverend Henry Williams, of the Humanity Baptist Church; and Karissa Cole, of the Gang Prevention Task Force, and the Oakland Community Action Network.

“The police were in there provoking us and saying things to us, acting disorderly, not us, and it ended up with us getting banned from the courtroom,” reported Shaw.

“I want to see justice. I want to see something happen for our young people, said Rev. Williams. “We want to teach Black history to our children, because they don't know nothing about who they are and where they came from,” he said.

Cole said,”everybody is talking about peace, but we're still waiting on our justice. Jim Crow is still in effect, it never died, it just changed the way it looked...This is bigger than what it seems. We need justice for not only for Oscar Grant, but for all the people of color in Oakland.”

A video of Tony Coleman speaking in front of the Courthouse in Los Angeles prior to commencement of trial of Office Johannes Mehserle, interviewed by Davey D, Davey D TV: http://www.youtube.com/watch?v=HnjSFfkWKdg

New video released by the Court of the shooting of Oscar Grant, which was taken by a passenger on a BART train stopped at the station: http://www.youtube.com/watch?v=S0P8TSP2YJU

A copy of the Press Release by Oakland General Assembly for Justice for Oscar Grant is at: http://www.indybay.org/uploads/2010/06/30/oakland_assembly_press_release_063010.pdf
§Reverend Henry Williams speaking at press conference
by Jonathan Nack 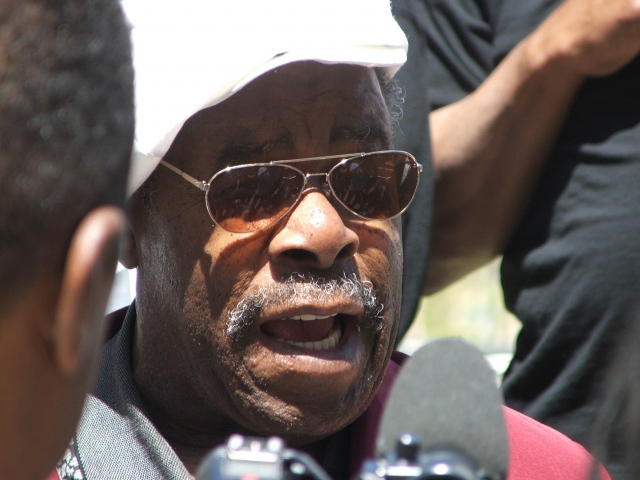 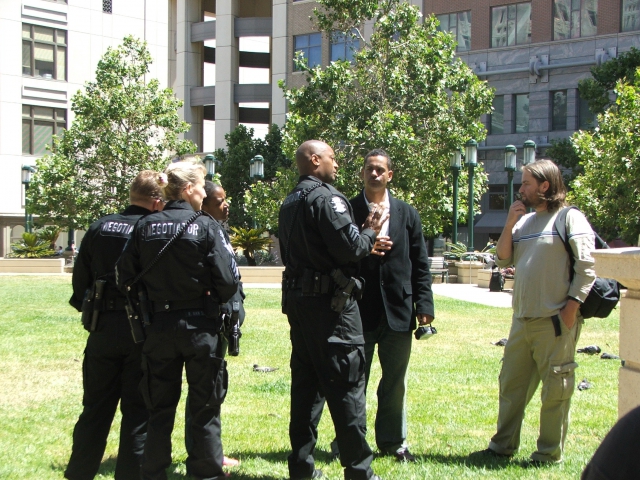 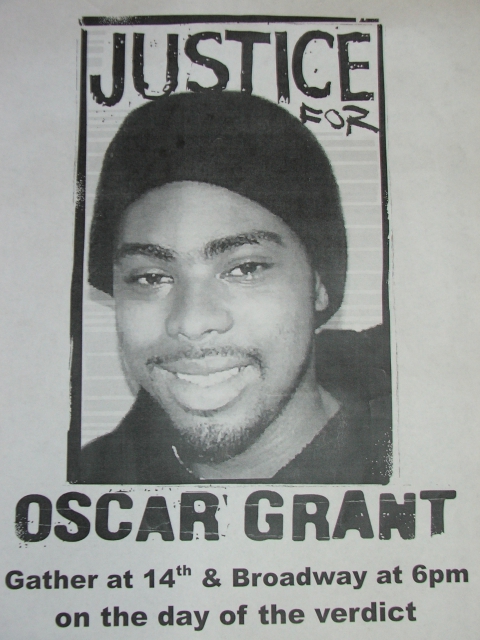 original image (1704x2272)
Photo: Jonathan Nack
Add Your Comments
Latest Comments
Listed below are the latest comments about this post.
These comments are submitted anonymously by website visitors.
TITLE
AUTHOR
DATE
to val D
oakland resident
TO the anarchist... WHY!!!!????
Val D
ACLU Statement in Anticipation of the Mehserle Verdict
Posted by Mike Rhodes
print your own posters
just do it
sharpening the divides
no non-profit
No justice, No peace, Fuck the police
Oakl@ndian
Struggle for class struggle leadership in the unions
eugean17
fascists retreat?
oaklandresident(ofmany)
general what?
ttttt
lets just call a fascist a fascist
oaklandresident
Support Independent Media
We are 100% volunteer and depend on your participation to sustain our efforts!