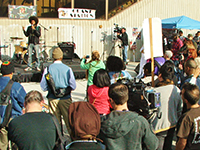 “We Are All Still Oscar Grant!”
Oakland Vigil Marks Five Years of Struggle for Justice for Oscar Grant

It was the early morning hours of January 1, 2009, when Oscar Grant was killed by BART Police Officer Johannes Mesherle at the Fruitvale Station. Local protests helped to galvanize a growing national movement to hold police accountable for their brutality, killings, and racism.

On January 1, 2014, hundreds of people marked five years of struggle for justice for Oscar Grant and all victims of police brutality and racism at a vigil at the Fruitvale BART Station in Oakland. “We are all Oscar Grant,” chanted the multiracial crowd of both young and old. Billed as a vigil, the program included musical and spoken word performances, spiritual rituals, and speakers.

That evening, before a standing-room-only crowd at Bikes 4 Life, a panel moderated by Tony Coleman and featuring Cat Brooks, Dan Siegel, Nigel Bryson, and Minister Keith Muhammad examined various aspects of the Justice for Oscar Grant Movement, its legacy, and how it continues to shape current events in Oakland. Following the panel, musical artists including Ras Ceylon, Jasiri X, and others performed socially conscious Hip Hop. The evening event was a "friendraiser" for the forthcoming documentary "Oscar Grant: The Rest of the Story".

“We Are All Still Oscar Grant!” - Oakland Vigil Marks Five Years of Struggle |