Add an Event
Newswire
Calendar
Features
Home
Donate
From the Open-Publishing Calendar
From the Open-Publishing Newswire
Indybay Feature
Publish to Newswire
Add an Event
Related Categories: East Bay | Police State & Prisons | Racial Justice
Gone But Not Forgotten - Justice for Oscar Grant! Community Rally, Fruitvale BART: audio & photos
by dave id
Sunday Jan 3rd, 2010 11:51 PM
On the first anniversary of the murder of Oscar Grant III by BART police officer Johannes Mehserle, family members organized a vigil at the Fruitvale BART station where Oscar was shot and killed. Community activists, organized as the General Assembly for Justice for Oscar Grant, planned for a rally at the Fruitvale station to commence at the conclusion of the vigil and a cultural gathering for the evening at the Humanist Hall in Oakland. This is the second of three posts on anniversary events. 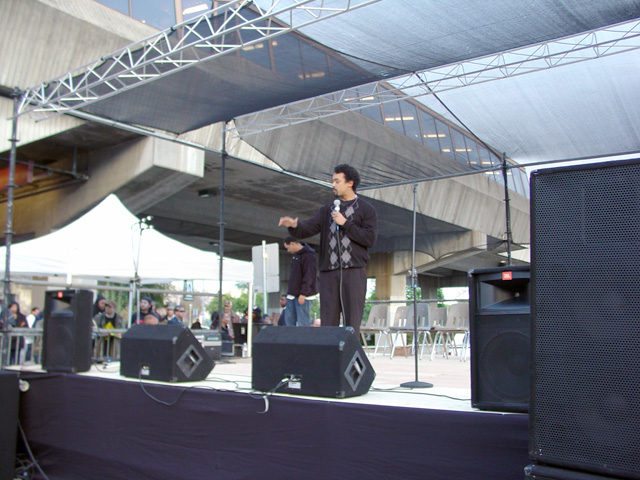 The ill-fated community rally at the Fruitvale BART station lasted for only about 20 minutes. You can read more details on the back story in the previous report on the family vigil -- details on the interference, harassment, and disruption by BART, Mayor Dellums' office, the Oakland police department, and a "concerned citizen" who did not want the community to hold events that allowed community members to truly speak their minds about the lack of justice yet achieved for Oscar Grant one year after his murder.

The first on stage at the community rally were a youth poetry group. Then Hannibal (pictured above) spoke about the many injustices perpetrated against young African American men by police. Next up was the Revolution Club and finally MC Tony Coleman (audio below) before the rally was shut down by Oakland City Councilperson Desley Brooks, supposedly on behalf of OPD and BART. Organizers never intended for the rally to last much more than 45 minutes as the main show was at the Humanist Hall anyway. But to be cut off was just another aggravation in a long line of officials disrespecting community activists regarding January 1st events.


There is currently a memorial at Fruitvale BART on the bus side of the station for those interested to leave candles, notes, and other mementos and statements that BART said it will allow for ten days. Feel free to contribute to it while you still can. 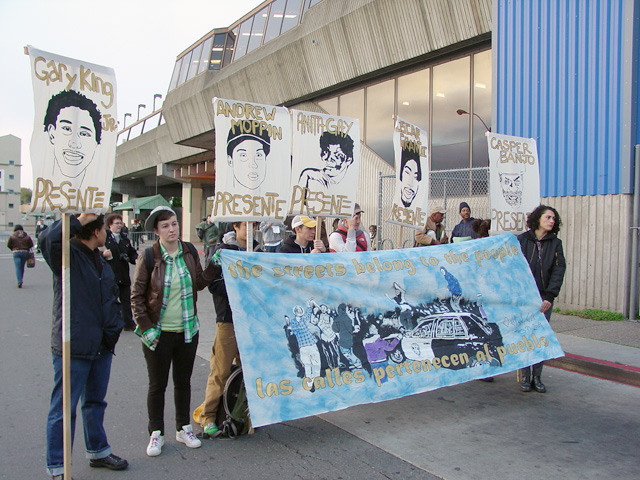 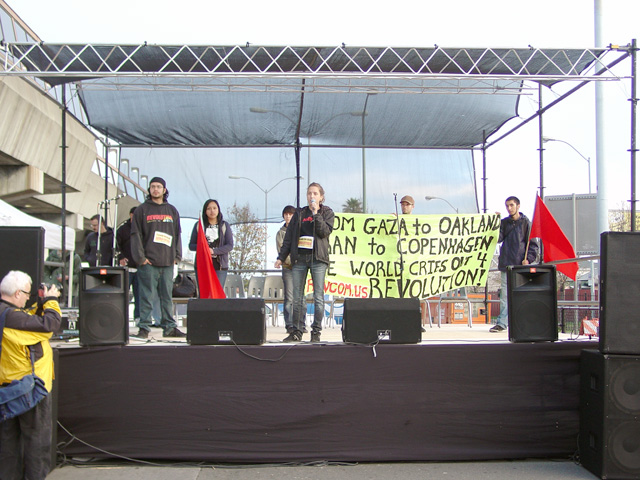 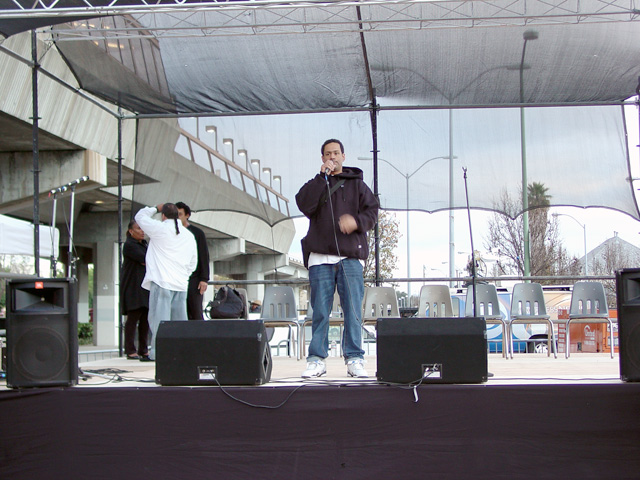 In the background on the stage, Councilperson Brooks is seen telling Jack Bryson and Hannibal that the show is over. She said, "The stage is mine," and demanded that Jack grab the microphone from Tony. Jack refused, but by that point the show was more or less over with Brooks haggling backstage. Apparently, Hannibal speaking freely on stage, and the Rev Club's communist ideology, followed by MC Tony Coleman speaking his mind was too much for Brooks. She insisted that a proper rally schedule of speakers had not been provided to OPD and that she would not allow an open-mic program to proceed. (Desley Brooks had contributed financially to pay for the stage and sound system, since BART denied support for the event to the family and the community.)
http://indybay.org/oscargrant
§Audio of Rev Club and Tony Coleman speaking as rally concluded
by dave id Sunday Jan 3rd, 2010 11:51 PM
Listen now:
Copy the code below to embed this audio into a web page:
Download Audio (4.4MB) | Embed Audio
(audio 12:46)
http://indybay.org/oscargrant
§Time to move to the Humanist Hall venue that community activists had secured themselves
by dave id Sunday Jan 3rd, 2010 11:51 PM 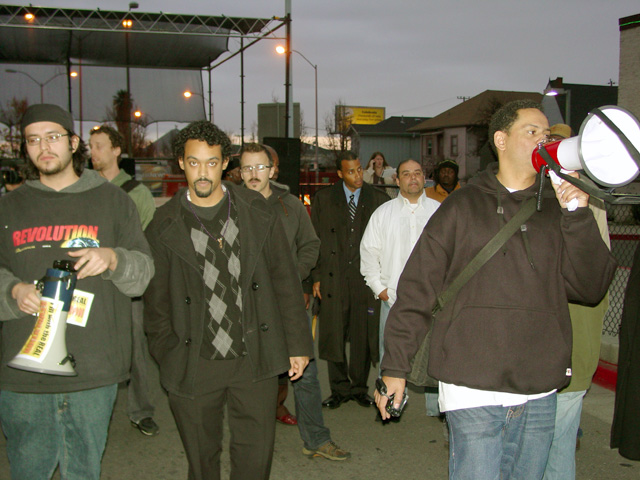 http://indybay.org/oscargrant
§BART employees obviously pleased with themselves that they had shut down community rally
by dave id Sunday Jan 3rd, 2010 11:51 PM 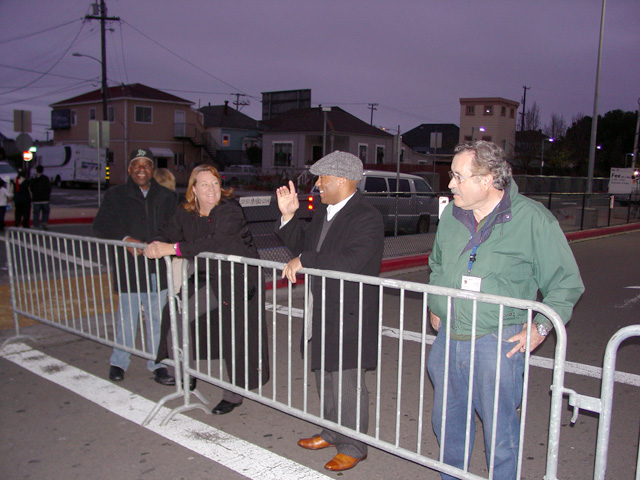 Man with his hand raised is Roddrick Lee, BART's Community Relations manager, who had personally attended meetings mentioned in previous post that aimed to intimidate Oscar Grant's family and later community activists as well. BART spokesman Linton Johnson had lied to corporate media reporters after the BART-family press release was sent out; he said the transit agency was not "actively involved" in the Fruitvale BART events, when BART actually had a direct hand in harassing the family, and later community activists, about January 1st plans from the very beginning.
http://indybay.org/oscargrant
§All clear by 5:14pm
by dave id Sunday Jan 3rd, 2010 11:51 PM 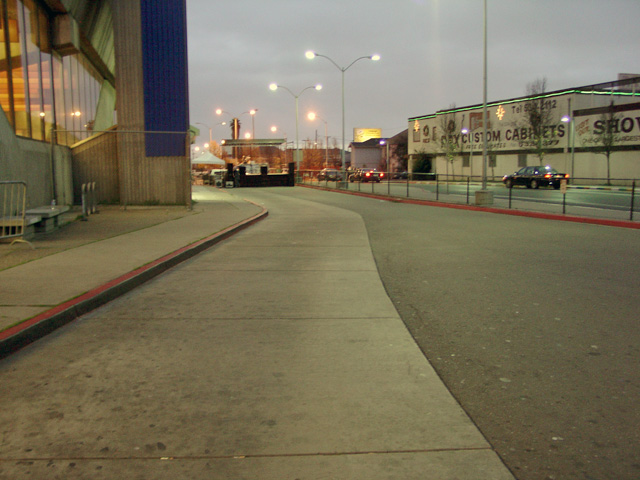 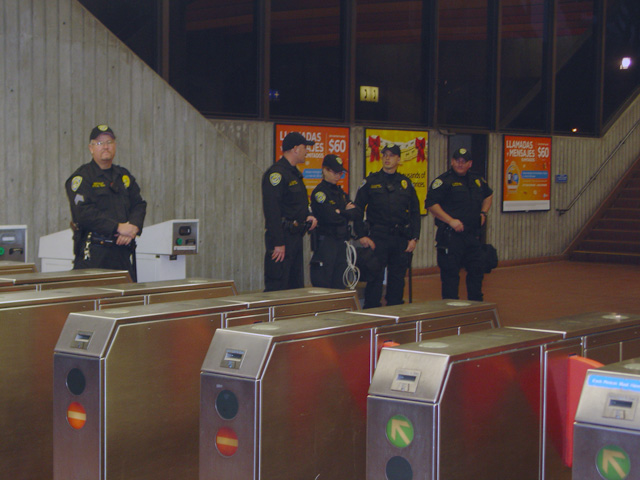 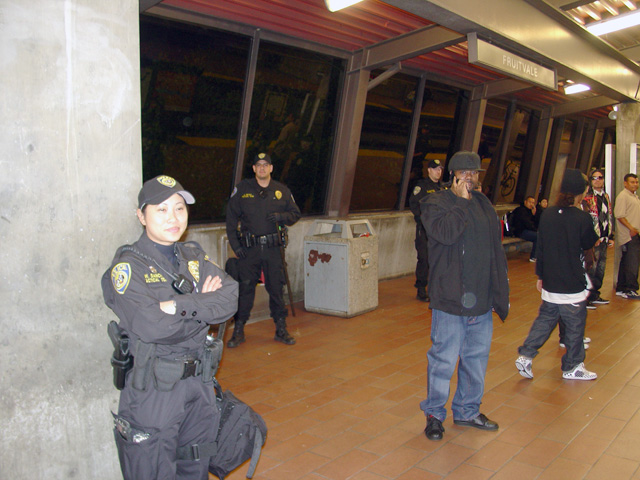 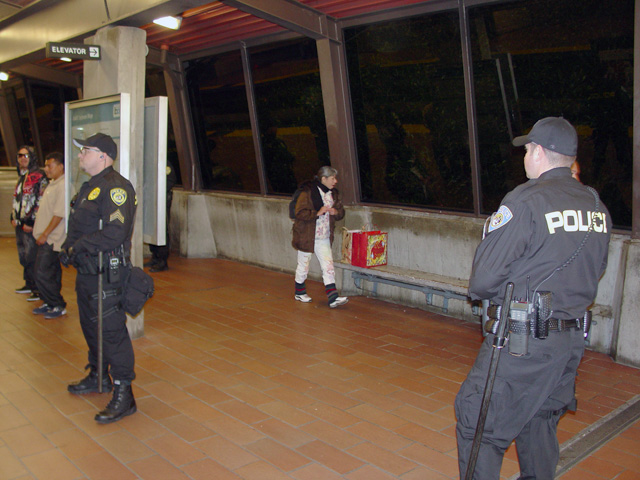 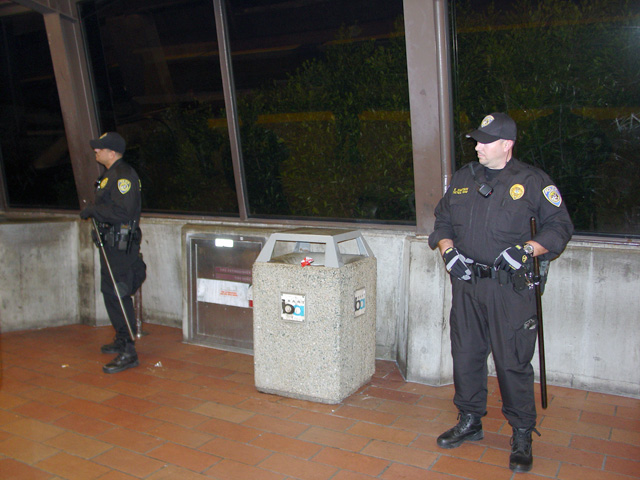 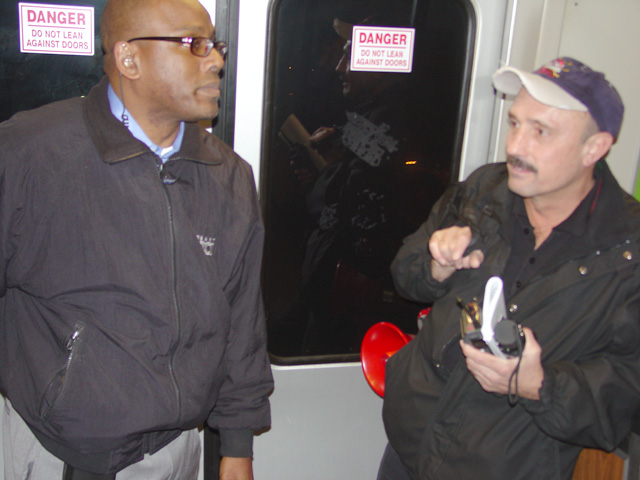 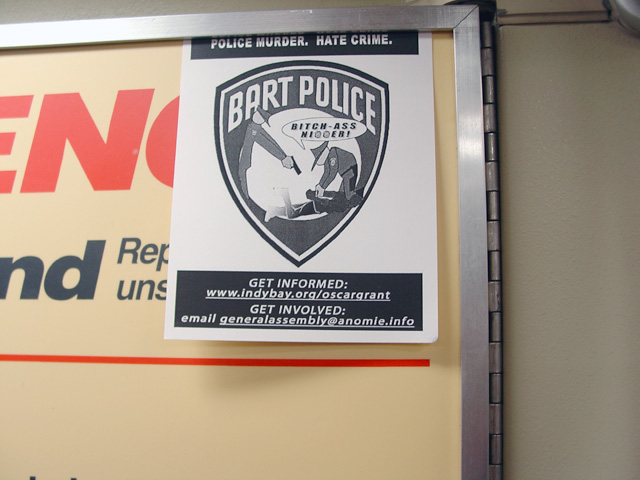 This flier is an updated version of one previously distributed by activists on the BART system passengers them of what Tony Pirone yelled at Oscar Grant moments before Johannes Mehserle shot him in the back. Mehserle's defense included that flier as an exhibit in their change of venue motion: http://www.indybay.org/newsitems/2009/10/04/18624445.php#18624447.
http://indybay.org/oscargrant
§Front of quarter-page fliers for further printing and distribution
by dave id Sunday Jan 3rd, 2010 11:52 PM 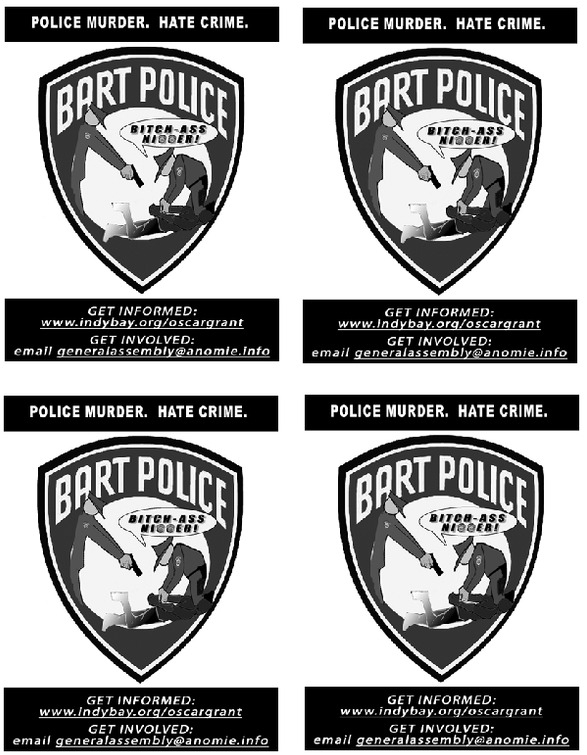 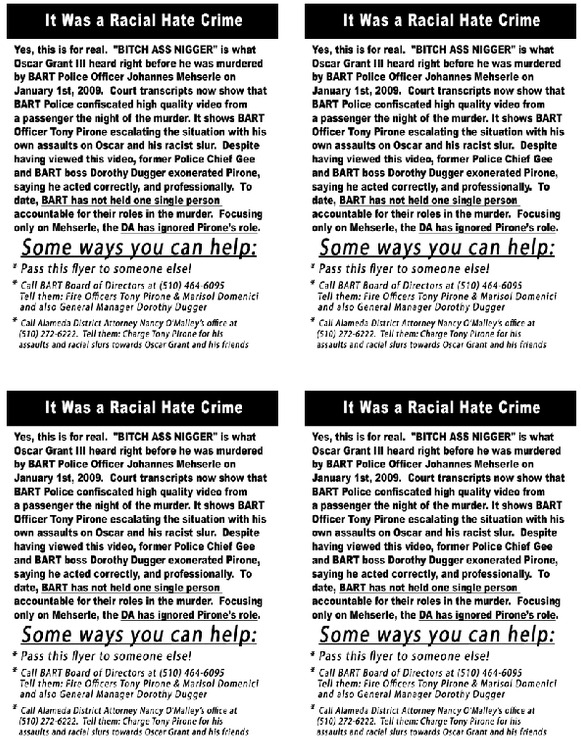 Yes, this is for real. "BITCH ASS NIGGER" is what
Oscar Grant III heard right before he was murdered
by BART Police Officer Johannes Mehserle on
January 1st, 2009. Court transcripts now show that
BART Police confiscated high quality video from
a passenger the night of the murder. It shows BART
Officer Tony Pirone escalating the situation with his
own assaults on Oscar and his racist slur. Despite
having viewed this video, former Police Chief Gee
and BART boss Dorothy Dugger exonerated Pirone,
saying he acted correctly, and professionally. To
date, BART has not held one single person
accountable for their roles in the murder. Focusing
only on Mehserle, the DA has ignored Pirone’s role.

Some ways you can help:

* Pass this flyer to someone else!

* Call Alameda District Attorney Nancy O’Malley’s office at
(510) 272-6222. Tell them: Charge Tony Pirone for his
assaults and racial slurs towards Oscar Grant and his friends