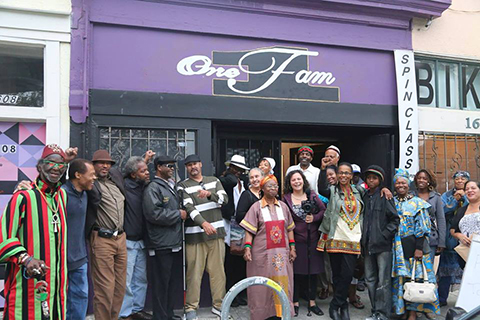 OneFam in West Oakland is a community-based organization that includes Bikes 4 Life, the 7th Street Rev Cafe, and attached land subleased for gardening projects. OneFam has roots in the Oscar Grant movement. Many organizing meetings happened in OneFam spaces. Tony Coleman and others built up unused storefronts by the BART tracks on 7th Street to serve the neighborhood, including One Fam, hosting countless community and artistic events, and Bikes 4 Life, providing bicycles for local kids and teaching related maintenance skills.

Over the last decade, however, the Black community in West Oakland has faced massive upheaval and displacement as gentrifying forces steamrolled through the neighborhood. For those who grew up in the area or have resided there for decades, West Oakland is becoming largely unrecognizable. And, now, Tony Coleman and allies are fighting imminent eviction from all related properties.

Tony declares that they will fight to the very end and not take it lying down, the loss of the last visible spot where the community can come together and share Black culture in West Oakland. While the legal and financial struggles to save OneFam continue, with the next court hearing set for June 21, solidarity BBQs on 7th Street are happening every Saturday afternoon 2-5pm, starting June 9.

Defend OneFam “The Last One Standing” from Gentrification |