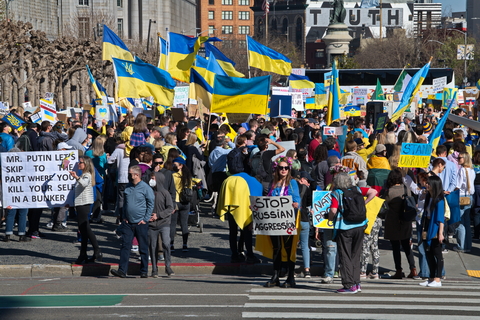 After having massed Russian military on the border of Ukraine, Russian President Vladimir Putin ordered the deployment of troops into Donbas on February 21, in what he referred to as a "peacekeeping mission." Then, on February 24, Russia began a full-scale military invasion of Ukraine, claiming its goal was to "demilitarize" and "de-nazify" the entire country.

The Ukrainian government did not collapse upon the first presence of Russian troops. Instead, a strong Ukrainian commitment to resistance arose. Russia has yet to take the capital Kyiv, but is increasing attacks on civilian centers as it assumes control of other Ukrainian cities in the north, east, and south. In response, Western nations have imposed increasing levels of sanctions on Russia and its elite, while NATO countries specifically are providing a steady stream of weaponry to Ukraine.

Bay Area Ukrainians and those in solidarity with them protested in San Francisco on February 26 and 27. Many of them agree with Ukrainian President Volodymyr Zelenskyy's calls for maximal NATO involvement. On March 6, Code Pink and other anti-war organizations have called for a Global Day of Action to protest the invasion, while also pointing to NATO expansion on Russia's border as having contributed to the crisis. The complicated politics of the invasion have exposed rifts across the political spectrum and led to some odd alliances. As the danger of a wider war looms, no one is sure how it can be stopped or where exactly it all ends.

Thousands Rally at the Embarcadero to Support Ukraine (Feb 26) |

Paint for Peace in Ukraine

Palo Alto Calls for Peace in Ukraine Noon and Night |

Silent Vigil for Peace in Ukraine

Putin's War, The Oligarchs & The Russian Working Class: A Report by Boris Kargalitsky |

For A Workers United Front Against The Russian Invasion of Ukraine |

Truth dies first and then intelligence

For a free and sovereign Ukraine |

No to the war over Ukraine