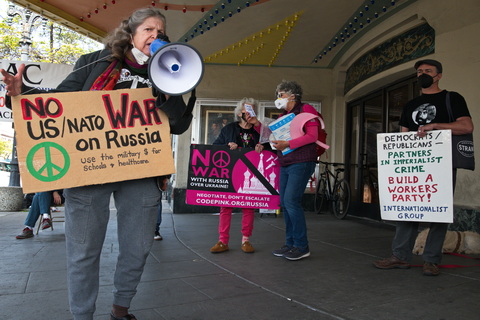 As the Biden administration keeps up a steady stream of predictions of imminent Russian invasion of Ukraine, along with shipping weapons and troops to Eastern Europe, anti-war groups in the Bay Area are responding. On February 5, they heeded the call put out by Code Pink and others to protest. Demonstrations were held in San Francisco (both at the Embarcadero and Speaker Pelosi's house), Oakland, Berkeley and Santa Cruz.

Prior to his one-on-one meeting with Vladimir Putin, French president Emmanuel Macron committed, according to Biden, the heresy of noting that Russia might have real security concerns regarding NATO, an anti-Russian military alliance, covering most of its western border. This is the border Germany crossed in World War II, killing thirty-two million Russian people.

No War With Russia; Yes to Diplomacy and Peace |

Protest in Oakland Says No to War with Russia |

Peace with Russia & Hate has no home here |

Capitalism shows its true colors: Money for war, but not for people's needs

Enlargement to the East: How NATO broke its word |

The bone of contention |

Coalition to Prevent War with Russia