Add an Event
Newswire
Calendar
Features
Home
Donate
From the Open-Publishing Calendar
From the Open-Publishing Newswire
Indybay Feature
Related Categories: International | U.S. | Anti-War
Russian Invasion of Ukraine Exposes Political Rifts and Makes for Strange Bedfellows
by Dave Id
Saturday Mar 5th, 2022 4:01 AM
The complicated politics of the invasion have exposed rifts across the political spectrum and led to some otherwise odd alliances. 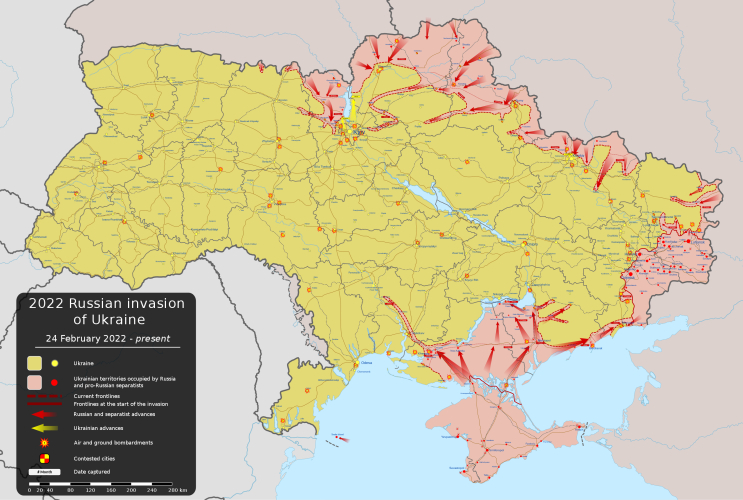 
Ever since the 2014 Euromaidan uprising in Ukraine deposed Russian puppet leader Viktor Yushchenko, Russian President Vladimir Putin has repeatedly moved against Ukrainian sovereignty, fully annexing Crimea to the south and working with Russian-backed separatists to seize part of the Donbas region to the east. In January 2022, the Russian military began massing along its borders with Ukraine. The U.S. Biden administration announced it had intelligence that the buildup was in preparation for an imminent invasion, and that Putin would stage false flag attacks in the east as a rationale for war. Putin countered that he had no intention to go to war. Ukrainian President Volodymyr Zelenskyy called for calm, hoping the U.S. was exaggerating the situation and that the Russian troops were a negotiating tactic rather than soon-to-be invaders.

However, on February 21, Putin announced the recognition of Donetsk and Luhansk as independent republics. Putin ordered the deployment of Russian troops into Donbas, in what Russia referred to as a "peacekeeping mission." Putin claimed there was an ongoing genocide being perpetrated against ethnic Russians in Donbas, and numerous small explosions and rocket fire in the area were blamed on Ukrainians. Then, on February 24, Putin dropped the pretenses and Russia began a full-scale military invasion of Ukraine, claiming its goals were to "demilitarize" and "de-nazify" the entire country. The Ukrainian government did not immediately collapse upon the first presence of Russian troops, as Putin might have expected. Instead, a strong Ukrainian commitment to resistance arose. Russia has yet to take the capital Kyiv, but increasing attacks civilian centers as it takes control of other Ukrainian cities in the north, east, and south.

In early February, before the invasion began, street protests around the world began and initial economic sanctions were placed on Russia, demanding no war with Ukraine. In the week-plus since the invasion commenced, Western nations increased the economic sanctions on Russia and Putin's circle of plutocratics, although they do not appear to be willing to boycott Russian natural gas and oil at this point. Ukraine has requested increased weapon supplies, the direct involvement of NATO militaries, and the establishment of a no-fly zone, but Western leaders fear anything other than providing weaponry could lead to a wider world war. NATO countries are increasing weapons supplies to Ukraine, but have declared that they will not directly fight themselves because Ukraine is not a member of NATO. Massive protests against the war have happened in European capital cities.

Bay Area Ukrainians and those in solidarity with them protested in San Francisco on February 26 and 28. Many of them agree with Zelenskyy's calls for maximal NATO involvement. On Sunday, March 6, Code Pink and other anti-war organizations have called for a Global Day of Action to protest the invasion, while also pointing to NATO expansion on Russia's border as having contributed to the crisis. Clearly, the complicated politics of the invasion have exposed rifts across the political spectrum and led to some otherwise odd alliances. A growing number of Democrats and Republicans are pushing for a ban on Russian oil and gas, which is widely anticipated to hurt the U.S. economy, not something politicians usually do ahead of midterm elections. A wide swath of Trump's base cheers on Russia, while some U.S. communists, derisively called "tankies," likewise support Russian objectives, or at least want a hands-off approach for NATO nations. Anti-imperialists of all stripes are split between traditional opposition to U.S. military aggression abroad and supporting the right of Ukraine to defend itself from Russian imperial ambitions, which for some includes Western weaponry. Anti-fascists are torn between sympathy to Ukraine's fight against being consumed by the Russian autocracy and revulsion at the level of support for neo-nazis and fascists within Ukraine. Many wonder where the worldwide outrage has been for those in Palestine, Yemen, Iraq, and other war zones relentlessly oppressed and attacked by greater military forces, as well as appalled that numerous non-European residents of Ukraine have been denied passage out of the country while a million Ukrainians have already been allowed to flee as refugees to Poland and Romania. Regardless of the overlapping and opposing interests of the rest of the world, Ukrainians are fighting for their independence and the Russian military continues to smashes through a growing number of cities. Russia is expected to be able to take all of Ukraine if it persists. As the danger of a wider war looms, no one is sure how it can be stopped or where exactly it all ends.
https://www.indybay.org/newsitems/2022/03/...
Add Your Comments
Support Independent Media
We are 100% volunteer and depend on your participation to sustain our efforts!