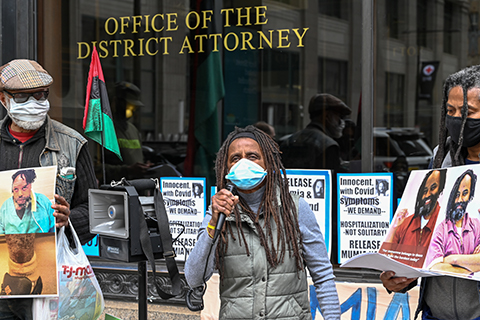 In 1982, radio journalist, political activist, and former Black Panther Party member Mumia Abu-Jamal was convicted of the murder of Philadephia police officer Daniel Faulkner in a trial that excluded evidence which would have proved his innocence. He was sentenced to death. Mumia's death sentence was overturned by a Federal court in 2001 and he was re-sentenced to life in prison in 2011. His case and continued incarceration have received worldwide attention and been the subject of countless protests for decades. Throughout his time in prison, Abu-Jamal has published multiple books and regularly comments on contemporary social and political issues through audio recordings. Inspired by the abolitionist politics of past UC Santa Cruz students and faculty such as Angela Davis and Huey P. Newton, Mumia enrolled as a PhD student in UCSC's History of Consciousness program in the Fall of 2019.

As Mumia has aged behind bars, inadequate medical care has led to several scares when his health deteriorated rapidly. In 2015, Mumia suffered diabetic shock and was diagnosed with active Hepatitis C. In late February, believing Mumia was infected with COVID-19 and suffering skin lesions, his supporters demanded proper medical care for him once again. After an outpouring of public pressure, authorities transferred Mumia to a hospital outside of the prison for emergency treatment, and he was indeed diagnosed as having contracted coronavirus as well as congestive heart disease. While Mumia's health issues still remain a concern, he is stable now and has been returned to general population at the Mahanoy State Correctional Institution in Pennsylvania.

Separately, all appeals filed by Mumia's attorneys between 1998 and 2012 were reopened by a new judge in 2018 and are currently being litigated.

What Larry Krasner the District Attorney of Philadelphia needs to do! |

It is now freedom or death for Mumia! |

The Jamal Journal issue #1 is now published online, Please help us print it! |

The International Federation of Journalists calls for Mumia Abu-Jamal's release |

Color of Change petition to PA Gov. Wolf: Release Our Loved Ones |

Pam Africa's Message to the Movement: Sign Our Petition! |

Please sign the Color of Change petition for Mumia Abu-Jamal |