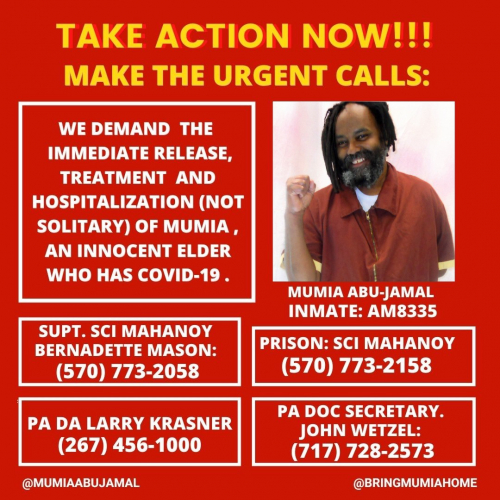 --Listen to Pam Africa on Black Agenda Radio: "Mumia believes he has Covid. His breathing feels like an elephant sitting on his lungs.”  II  Read the Philadelphia Inquirer article

URGENT! Please call these 5 phone numbers now, and tell them: The prison must immediately test Mumia Abu-Jamal, and it must provide him with treatment, monitoring of his oxygen levels, and hospitalization if his oxygen falls below safe levels. 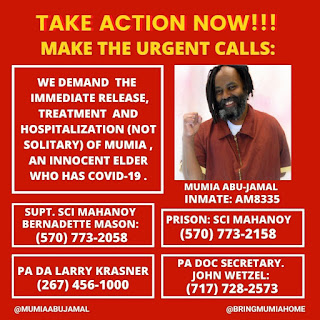 Yesterday Mumia Abu-Jamal called from his cell block at SCI Mahanoy, reaching Pam Africa , and letting all of us know that he is seriously ill. He has had difficulty breathing and chest pain, symptoms of COVID. We will continue to closely monitor his health, and provide updates.


At a demonstration this afternoon, his grandson spoke:

"We have to each one teach one, and we when we teach one we teach more.  They are trying to bury my grandfather... freedom is the only solution in Mumia Abu-Jamal's case'.  They have have built careers off of trying to convict and kill Mumia Abu-Jamal.  I need Larry Krasner to do what he was elected to do, give Mumia a fair trial, and let the evidence be heard in court.  We have to shout from the roof tops."

As a survivor of chronic hepatitis C, and medical neglect, Mumia Abu-Jamal is an elder and at a heightened risk for serious complications.

The prison must immediately test Mumia Abu-Jamal, and it must provide him with treatment, monitoring of his oxygen levels, and hospitalization if his oxygen falls below safe levels.

Every action matters.  It is time for our political prisoners and elders to return home to their families.

http://www.jamaljournal.com
Add Your Comments
Support Independent Media
We are 100% volunteer and depend on your participation to sustain our efforts!