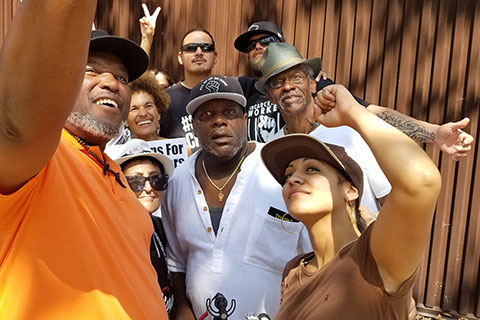 Called by prisoners to give voice to their demand to remove the prison slavery clause from the 13th Amendment, thousands turned out in as many as 16 cities on August 19 to abolish slavery and end mass incarceration. At the main march in Washington, D.C., a speaker from Leonard Pelitier's support committee read Leonard's statement of solidarity with Mumia Abu-Jamal. In San José, about 200 people marched to the county jail for a rally with speakers who saluted the prisoners and inspired the crowd.

Every year for decades Black radical prisoners and liberationists have identified August as a month for organized resistance and commemoration. Created to honor the deaths of George and Jonathan Jackson — freedom fighters who were killed by authorities in the early 70s — Black August holds a long tradition and legacy of resistance. Since its inception, historians and radicals have linked the month to many examples of oppression and resistance: everything from the Move Bombing and the Watts Rebellion to the Haitian revolution and the first arrival of enslaved Afrikans in Jamestown, Virginia, occurred in the month of August.