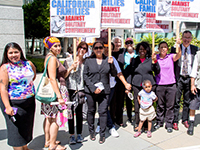 Led by those inside California prisons, who often put their lives on the line, a settlement was reached on September 1 in the federal class action Ashker v. Governor of California that will mostly end indeterminate, long-term solitary confinement in all California state prisons. Subject to court approval, the agreement will result in a dramatic reduction in the number of people in solitary across the state and a new program that could be a model for other states going forward. The class action was brought in 2012 on behalf of prisoners held in solitary confinement at the Pelican Bay, but the settlement reaches prisoners across California with over a thousand people set to make it out of Security Housing Units (SHU).

When the case was filed in 2012, more than 500 prisoners had been isolated in the SHU at Pelican Bay for over 10 years, and 78 had been there for more than 20 years. They spent 22 ½ to 24 hours every day in a cramped, concrete, windowless cell, and were denied telephone calls, physical contact with visitors, and vocational, recreational, and educational programming. Hundreds of other prisoners throughout California have been held in similar SHU conditions. Extensive expert evidence in the case established severe physical and psychological harm among California SHU prisoners as a result of prolonged solitary confinement.

The new settlement transforms California’s use of solitary confinement from a status-based system to a behavior-based system; prisoners will no longer be sent to solitary based solely on gang affiliation, but rather based on infraction of specific serious rules violations. It also limits the amount of time a prisoner can spend in the Pelican Bay SHU and provides a two-year step-down program for transfer from SHU to general population.The agreement creates a new non-solitary but high-security unit for the minority of prisoners who have been held in any SHU for more than 10 years and who have a recent serious rule violation. They will be able to interact with other prisoners, have small-group recreation and educational and vocational programming, and contact visits.

The National Lawyers Guild and other parties to the settlement note that the settlement does not completely eliminate indeterminate long-term solitary confinement and that prison guards and other officials may create new forms of harassment. Carol Strickman, Guild member and staff attorney at Legal Services for Prisoners with Children, cautions, "This important victory is only one step towards the abolition/transformation of the prison system. We must continue to push for change."

Struggle against solitary confinement and a new humanism |

Coastside Vigil in Santa Cruz Protests Use of Solitary Confinement |