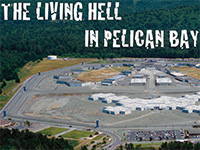 Prisoners in the Security Housing Unit (SHU) at Pelican Bay State Prison in Crescent City, California announced that they are beginning an indefinite hunger strike on July 1st to protest the conditions of their imprisonment, which they say are cruel and inhumane. An online petition has been started by supporters of the strikers. While noting that the hunger strike is being "organized by prisoners in an unusual show of racial unity," five key demands are listed by California Prison Focus:

1) Eliminate group punishments; 2) Abolish the debriefing policy and modify active/inactive gang status criteria; 3) Comply with the recommendations of the US Commission on Safety and Abuse in Prisons (2006) regarding an end to long term solitary confinement; 4) Provide adequate food; 5) Expand and provide constructive programs and privileges for indefinite SHU inmates.

The CA Department of Corrections and Rehabilitation prides itself on Pelican Bay being "the end of the line," and is part of a continuation since the 1960s of prisons using solitary confinement as a main tactic to crush rebellion and resistance.

Prisoner Hunger Strike Solidarity states, "As anti-authoritarians and anarchists, this is a crucial moment to show our solidarity with those on the inside who are ready to die in their fight for dignity and the most basic necessities of life that the state continues to deny. This will be the third major hunger strike in a US prison in the past year and those of us fighting on the outside need to make a visible show of support for this wave of prisoner-led organizing."