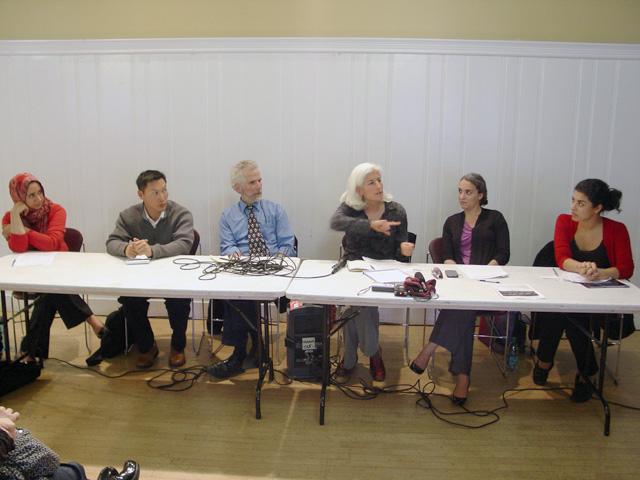 Panelists explain that it was without public involvement that supermax prisons began to be built in the United States in the late 1980s. The first was in Arizona, to be followed by Pelican Bay in California and a federal supermax in Colorado in 1994. Today, a majority of states have at least one supermax prison or penitentiary, several having up to four, and virtually every prison now includes Security Housing Units (SHUs) which specialize in sensory deprivation.

While virtually all jails and prisons in the United States have historically contained isolation units of one form or another, the newer style of prisons known as "supermax", along with SHUs, consist entirely of segregated, solitary confinement, isolation units, where prisoners are generally allowed outside of their individual cells no more than one hour per day. The ill effects of sensory depravation in these prisons can be devastating for inmates, even more so for those previously suffering from any mental health issues. On a societal level, isolation units are counterproductive to prisons being institutions for rehabilitation when inmates are psychologically tortured while behind bars.

In California and some other states, monitoring prison conditions and inmate health is made especially difficult due the the secrecy enforced through gag rules against reporters interviewing prisoners. Panelists note that the U.S. Constitution is being mooted by rules such as these and other denials of basic civil rights in supermax prisons. Solitary confinement for years without trial, or while awaiting trial, is used to "break" Muslim prisoners. Minors are being held in solitary as well, charged as adults after the passage of Proposition 21 in California.

In 2006, a new type of isolation unit in federal penitentiaries was established called Communications Management Units (CMUs), despite objections from civil liberties organizations. These new facilities offer no contact visits and only four hours a month with family and friends. Due to public pressure, the time allowed was increased to two four-hour visits in January of 2010. Additionally, visits are often difficult as prisoners can be sent hundreds if not thousands of miles from where they live. CMU inmates are allowed two fifteen-minute calls per month, in which family members must be as succinct as possible and pass the phone quickly to everyone who wants to speak.

Over 65% of inmates in CMUs are Muslim. The next largest populations are political prisoners, either environmental and animal activists who are now classified as "terrorists" by law enforcement agencies and those who have become prison civil liberties activists while behind bars. Given who is currently being held in isolation units, there are obvious parallels between the growth of supermax prisons, SHUs, and CMUs domestically and notorious U.S. military prisons abroad such as Abu Ghraib in Iraq and Guantanamo Bay in Cuba.

Panelists field questions from the audience for about twenty minutes at the conclusion of their talk. 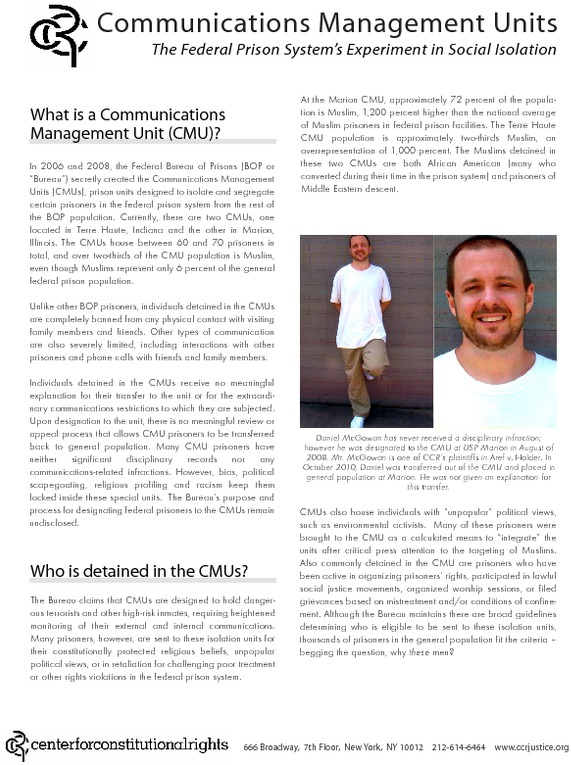 Daniel McGowan is an environmental activist who was placed in a CMU for over two years and is now party to a federal lawsuit by the Center for Constitutional Rights challenging the policies and conditions at two CMUs, as well as the circumstances under which they were established. 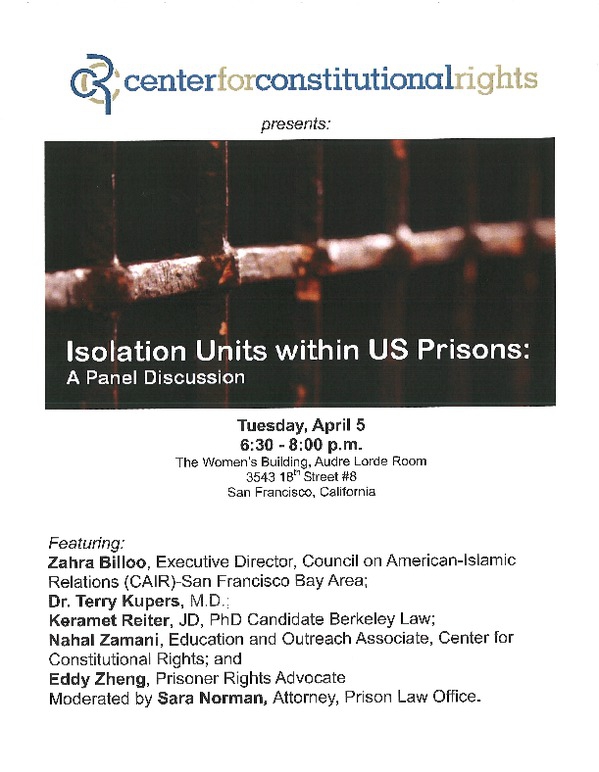 Includes speaker biographies on reverse side.

http://www.indybay.org/police
Add Your Comments
LATEST COMMENTS ABOUT THIS ARTICLE
Listed below are the latest comments about this post.
These comments are submitted anonymously by website visitors.