Add an Event
Newswire
Calendar
Features
Home
Donate
From the Open-Publishing Calendar
From the Open-Publishing Newswire
Indybay Feature
Publish to Newswire
Add an Event
Related Categories: East Bay | North Coast | San Francisco | Police State & Prisons
SF and Oakland Demos: "Pelican Bay Brothers: We Hear You, We're With You!"
by Revolution Newspaper (revolution.sfbureau [at] gmail.com)
Tuesday Jul 5th, 2011 6:21 PM
More than 70 people gathered at the California State Building in San Francisco on July 1 to support and stand in solidarity with the hunger strike in Pelican Bay Prison.
"The proponents of the prison industrial complex are hoping that their campaign to dehumanize us has succeeded to the degree that you don't care and will allow the torture to continue in your name. It is our belief that they have woefully underestimated the decency, principles, and humanity of the people."
— Letter in solidarity with the Pelican Bay hunger strike by prisoners in the Corcoran SHU

More than 70 people gathered at the California State Building in San Francisco on July 1 to support and stand in solidarity with the hunger strike in Pelican Bay Prison.

A wide variety of groups joined together to build the rally to support the five demands of the prisoners in the Pelican Bay Prison SHU*. They felt it was important—on the very first day of the hunger strike—to let the prisoners know that there are many on the outside that are determined to spread the news and build broad support to help them WIN! The rally brought together many groups and individuals that have been fighting the brutality of the prison system and the criminalization of Black and Latino youth. These included: California Prison Focus, All of Us or None, Legal Services for Prisoners with Children, California Coalition for Women Prisoners, Project Rebound at San Francisco State University and the American Friends Service Committee. Supporters of Revolution newspaper were among the organizers of the rally. World Can't Wait drew links between the Pelican Bay SHU and the torture carried out by the U.S. around the world. A number of people who had been imprisoned or had a friend or family member behind the walls were moved to themselves stepping forward to the mike. Many passersby, who had not heard of this before, stopped to find out about the hunger strike. The Revolution Club of the Bay Area brought a large banner that said "East Oakland Revolutionaries Support the Hunger Strike."

All these people were drawn together by the barbaric conditions in the Pelican Bay SHU and the courage of the prisoners in this high-stakes, life-or-death struggle. As Laura Magnani from the American Friends Service Committee said, "I stand here with a mixture of excitement and horror. Horror at the conditions faced by 1,200 prisoners at Pelican Bay and over 3,500 prisoners in security housing units throughout California. Excitement that the prisoners have successfully organized across racial groups to take this action."

The demonstrators chanted: "Pelican Bay Brothers: We Hear You, We're With You!" Several speakers announced that they were fasting in solidarity with the prisoners. The American Friends Service Committee announced a "rolling hunger strike." Another demonstration in support of the hunger strike is planned for July 9.

These are excerpts from some of the statements made at the rally in San Francisco on July 1:

Laura Magnani, American Friends Service Committee: "I stand here with a mixture of excitement and horror. Horror at the conditions faced by 1,200 prisoners at Pelican Bay and over 3,500 prisoners in security housing units throughout California. Excitement that the prisoners have successfully organized across racial groups to take this action. This is a tremendously courageous action—to go on hunger strike, when people are virtually on starvation diets to begin with—to deprive themselves of food for we don't know how long. And it is extremely important that we be here to support them and show our solidarity…. There are 1,440 security housing units across the country in state facilities, federal facilities and some, I think even in local jails. There's at least 25,000 in long term isolation across the country but probably the figure is closer to 70 to 80 thousand if you include all forms of isolation."

Manuel La Fontaine, All of Us or None: Imagine being in a 10 by 6 foot concrete box where you have no access to sunlight because there are no windows, you have no contact with mother nature except what you can imagine. After being locked up in a 10 by 6 box the imagination can only go so far. Imagine having no contact with another human being. The only contact you have is with guards, who don't have your best interests. You may also have contact with medical staff who may also not have your best interests. Imagine having no communication with anybody for years except guards. Imagine hearing another human being, and for you that's something new after being deprived of that for months, years, sometimes decades. We have to understand that this is torture going on! We don't have to go to Guantánamo Bay. We don't have to go to Abu Ghraib. Torture is happening here in California. Torture is happening under our watch.

Charles Carbone, prisoner rights attorney and long time host of Prison Focus on SF radio station KPOO: The state has decided to practice unadulterated torture. For no other reason than to maintain control in the remainder of the prison system. This costs each of you about $57,000 a year [for each prisoner]. We spend more on the Security Housing Unit than we do on sending people to Stanford. And it's based entirely on a singular lie. And the lie is that these people in the Security Housing Unit are supposedly "the worst of the worst." They are "the incorrigible," those "beyond redemption or rehabilitation." And yet those very "worst of the worst" when confronted with a very real conflict—their own liberty, how they are being treated, how they are being dehumanized, what did they come up with? They didn't shank a guard, they didn't attack one another, they didn't go on a rampage. They adopted the principles of non-violent civil disobedience. What does that say about the lie that we are being told?

Richard Brown, former Black Panther and member of the Committee for the Defense of Human Rights: If you think there is a difference between you and the prisoners in Pelican Bay, there's not. You don't have any more rights than they do. When you fight for their rights then you fight for your rights also. Because whatever they can do to them and get away with it they are going to do that to you. Believe me it's coming. They are already doing it… Just like they did to the Black Panther Party they will use the media to paint us as criminals, as a gang, as terrorists, as just thugs, period. Which is a lie. I joined the Black Panther Party to serve the people. We had breakfast for children programs. We had seniors programs. We had street clinics for people who couldn't afford medicine. We did things to serve the needs of the people in the community. Because we had the audacity to think that we had the right to determine our own destiny and because we didn't want anyone telling us Black people how to live, we were considered a threat. They didn't want that. The same thing they are doing to prisoners. They tell you that these people are "the worst of the worst," that they are murderers, rapists, robbers. They turn public opinion against prisoners, which is why they feel that they can do these things and get away with it. People go to institutions for a lot of different reasons. A lot of people who are guilty go there and they turn their lives around. There are some people who are not guilty, who were framed, like I was. But regardless of whether they are guilty, turned their life around, or are a political prisoner they all should be treated with dignity and respect. Nobody should be tortured. Nobody should be put in conditions where they can't fight back. We have to continue to support these brothers in the SHU. We have to continue to fight for them and send them word that they should continue to fight. All power to the people.

A Speaker from the Bay Area Revolution Club said: “The reality is that nothing short of a revolution can solve the obstacles that humanity is facing in any way whatsoever. Reform is not going to cut it. These prisoners rising up and taking this hunger strike should send a message to the people outside of the walls and make them realize that these “worst of the worst” are the first ones to stand up against illegitimacy. What we should have been doing long ago.

Deidre (fighting gang injunction in Oakland): A whole group of us have been active against the gang injunction and there is a specific reason for this. It's connected with the steamrolling of our humanity. And that's why we're here today. What's really going on is that the prison system is an extension of the slave system. I've been through it myself. I was incarcerated for four years and during that time I was steamrolled personally. The state took my kids and what was really at the root of my persecution was that we were leading an alternative lifestyle that was a challenge to this system. I've been there and I've seen the potential of people who are locked up and I've seen that 95 percent of the people who do get locked up are victims of trauma, of institutional racism, of domestic violence, of child abuse. This is the reality of people who are being steamrolled to prison. And I know how arbitrary the discipline is… It's about breaking you. That's what the whole thing about debriefing and holding people in the SHU is about. There is no reason, there is no point in caging someone in a concrete cell but to break their spirit and we are condoning that. Most people don't know that it's happening and most people don't care, because it hasn't sunk in because of all the brainwash of being tough against crime has turned people against themselves. It's a cannibalistic system.

Friend of a Prisoner: My best friend is being held at Pelican Bay. He came into the system when he was 17 years old and they threatened to send him to Pelican Bay. And sure enough when he was convicted they sent him to Pelican Bay at age 18. I found him a year ago and I went down last weekend to see him and I just came back. I was the first person to give him a hug in 11 years. His own mother, his brothers, his sister, even his own daughter has not been able to give him a hug in over 11 years. These people are asking for something very simple. Just to be able to hug their family members, to call their family members. Very simple things. My friend is not a bad person. He's a wonderful person. He's my best friend. 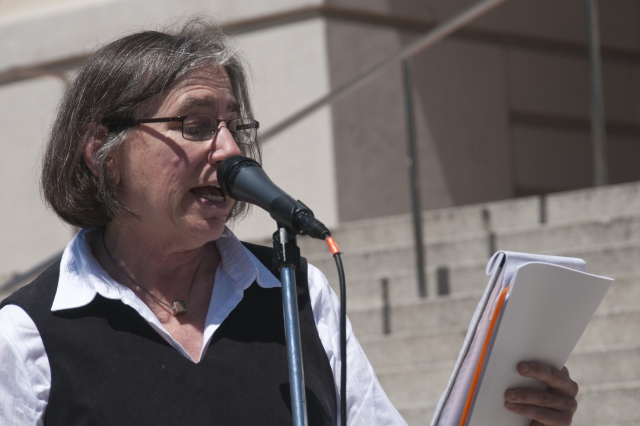 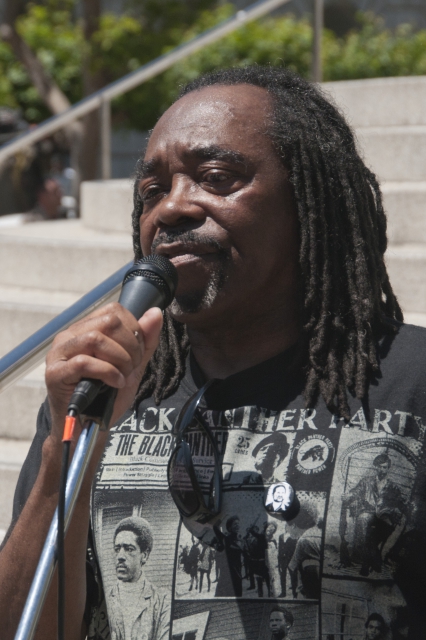 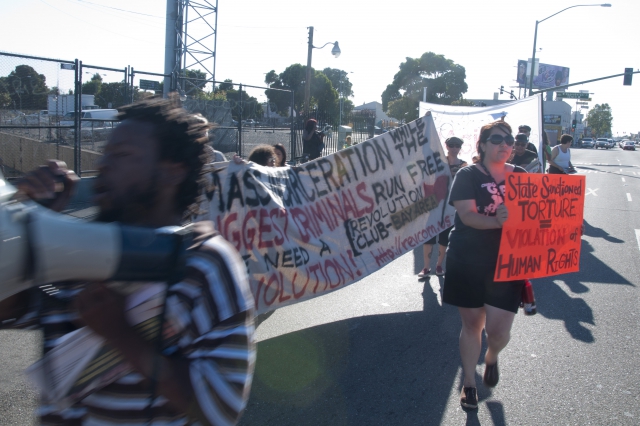 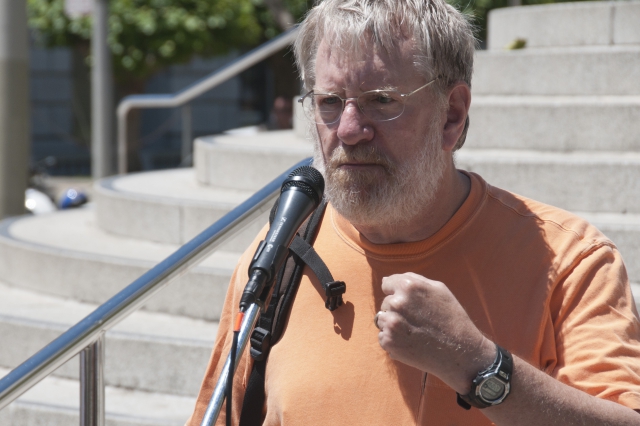 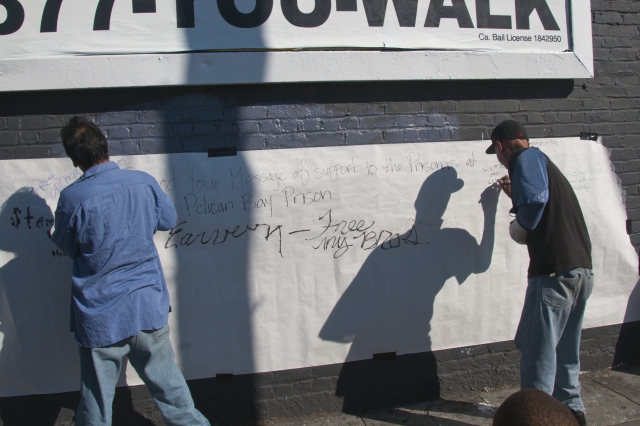 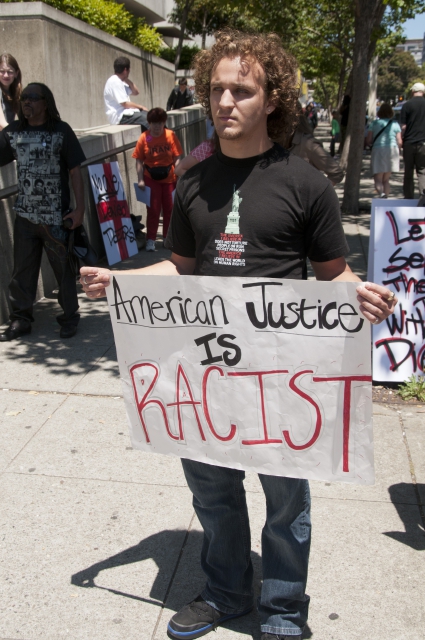 original image (2561x3851)
http://revcom.us
Add Your Comments
Support Independent Media
We are 100% volunteer and depend on your participation to sustain our efforts!