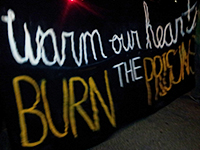 On July 4th, about 100 people marched from Oscar Grant Plaza to the Glenn Dyer Alameda County Jail as riot police staged inside the Oakland police department headquarters. Marchers were acting in solidarity with hunger strikers in the SHU (Special Housing Units), "prisons within prisons," where inmates are kept in solitary confinement for years and even decades. Prisoners within the SHU can only leave the isolation units after they inform on others, a policy called "debriefing," even if they have no information to give to prison authorities.

Marchers played music, passed out informational flyers, wrote graffiti slogans and put up informational stickers, and upon reaching the jail on 7th and Clay streets, shot off fireworks for about twenty minutes. The fireworks lit up the night sky and prisoners responded by throwing up raised fists in the window and turning lights on and off to let those know outside that they could hear them.

On July 8th, California prisoners began a hunger strike and work stoppage in order to insist upon five core demands that the governor and the Department of Corrections have failed to implement since negotiations surrounding the previous hunger strikes of 2011.