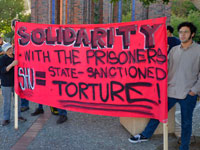 On July 31, community members in Santa Cruz marched to the county jail as part of "Hunger for Justice," an international day of protests and events held in solidarity with the prisoners on hunger strike in state detention facilities across California since July 8. According to the organization Sin Barras, 37 prisoners in the Santa Cruz County Jail have also joined the hunger strike.

Ending long term solitary confinement and the Security Housing Unit (SHU), is one of the demands of the prisoners who are on hunger strike in California's State prisons, and the topic was a point of focus at the Hunger for Justice demonstration. Members of Sin Barras read excerpts from letters from a prisoner with whom they are corresponding who is currently being held in the SHU at Corcoron State Prison. He has been living in a small box for decades in that facility, with no human contact, no access to sunlight, no adequate food, and no adequate medical care. When describing how torturous his living conditions are, he refers to the strike, saying, "hunger strikes are political statements, they are also acts of desperation."