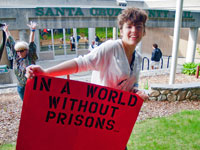 On April 6 the organization Sin Barras, which means "without prison bars" in Spanish, held a rally and march to the Santa Cruz County Jail in response to the four recent deaths of individuals while in custody at the facility. Organizers announced they had gotten word that inmates were aware of the demonstration and were excited to hear it from inside. This was confirmed as marchers neared the women's wing of the facility, and individuals inside banged on the walls and flashed lights through the opaque windows.

"Our jail is seen as a model county that a lot of other sheriff's departments are looking at," Tash Nguyen of Sin Barras stated, pointing to the broader implications of conditions at the facility. According to the Sin Barras press release, those conditions inside the Santa Cruz County Jail amount to "torture."

"We demand that county officials provide real health care for those inside, eliminate pretrial detention, and fund homeless service programs and drug treatment centers outside of jail walls," the press release further stated.

Previous Coverage: Sin Barras Speakout and March on April 6 in Solidarity with Prisoners