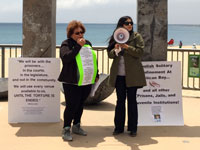 On May 23, families and loved ones of people in solitary confinement, and advocates from community organizations, held the third Statewide Coordinated Actions To End Solitary Confinement (SCATESC) throughout California in Manila, Los Angeles, Oakland, Point Reyes, San Diego, San Francisco, San Jose, Santa Barbara, and Santa Cruz, as well as in Philadelphia. So far, over 50 organizations statewide, nationally, and internationally, are co-sponsors and endorsers, and the movement continues to grow.

Cynthia Fuentes, of California Families Against Solitary Confinement (CFASC), spoke about her brother, Robert “Robio” C. Fuentes, Sr., PBSP SHU 20 years, hunger striker, poet, and jailhouse lawyer, who never debriefed, and died due to medical neglect and mistreatment by CDCR. She stated, “It was never just my brother who was incarcerated; it was the whole family. CDCR separates prisoners from their loved ones. I watched my parents age much more than they should have. It was heartbreaking. During visits there was never any contact; you talked on crappy phones through heavy glass."