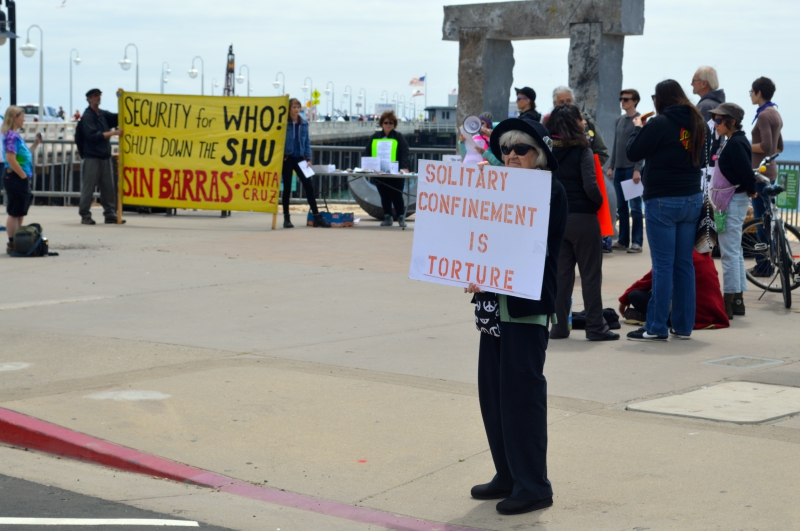 original image (6016x4000)
Statewide:
On May 23, 2015 families and loved ones of people in solitary confinement, and advocates from community organizations, held the third Statewide Coordinated Actions To End Solitary Confinement (SCATESC) throughout California (in Manila, Los Angeles, Oakland, Point Reyes, San Diego, San Francisco, San Jose, Santa Barbara, and Santa Cruz), and in Philadelphia. So far, over 50 organizations statewide, nationally, and internationally, are co-sponsors and endorsers, and the movement continues to grow.

In 2011, CA prisoners made human rights demands for the CA Department of Corrections and rehabilitation (CDCr) to end the torture of long-term solitary confinement and abusive conditions. Thousands went on peaceful hunger strikes then and again in 2012. In August 2012, prisoners enacted the Agreement to End Racial Hostilities in lock-ups and in the streets, and called for the CDCr budget (now over $12 billion for 2015) to be used for education, social programs, and resources for people locked down and the people of CA. The Agreement to End Hostilities helped over 30,000 CA prisoners, and hundreds throughout the US, go on hunger strike in July 2013, making it the largest hunger strike in world history. They won international condemnation of the torture.

SCATESC is responding to proposals for action put forth in November 2013 from the Pelican Bay State Prison (PBSP) Short Corridor Collective. Their proposals included “…designating a certain date each month as Prisoner Rights Day…our supporters would gather in locations throughout California to expose CDCR’s actions and rally support efforts to secure our rights.” The actions began on March 23, 2015 and happen on the 23rd of each month to highlight the 23 or more hours a day that over 12,000 Californians are locked alone in concrete and steel cells the size of a bathroom, without fresh air or sunlight, for years and decades on end.

“Our outside supporters have all of our gratitude; their tireless efforts supportive of our cause make a giant positive difference,” wrote Todd Ashker, PBSP Security Housing Unit (SHU) for two decades, and lead plaintiff in a class action lawsuit charging that California violates the constitutional rights of people in long-term solitary confinement. “They have recently begun monthly supportive actions---across the state---publicly rallying on the 23rd of each month for the purpose of keeping the subject of our endless torture in public view, and thereby exposed to the world. The 23rd of each month is symbolic of our 23+ hours per day in these tombs-of-the-living-dead---and it is hoped such rallies will spread across the nation.”

Santa Cruz:
About 25 people rallied at the entrance to the Santa Cruz wharf, where locals and tourists found two large banners, storyboards exposing the realities of solitary confinement, signs, and a variety of educational literature about solitary confinement in Santa Cruz and California. Cynthia Fuentes, California Families Against Solitary Confinement (CFASC), spoke about her brother, Robert “Robio” C. Fuentes, Sr., PBSP SHU 20 years, hunger striker, poet, and jailhouse lawyer, who never debriefed, and died due to medical neglect and mistreatment by CDCr. She stated, “It was never just my brother who was incarcerated; it was the whole family. CDCR separates prisoners from their loved ones. I watched my parents age much more than they should have. It was heartbreaking. During visits there was never any contact; you talked on crappy phones through heavy glass. My brother was Mexican but his skin was white because he never got sunlight. He became a prolific writer. He was published in Chicken Soup for the Prisoner's Soul and Chicken Soup for the Sister's Soul. He wrote “Precious in My Eyes,” a story about me. He touched humanity and people’s hearts. His memory is being kept alive by people in Pelican Bay SHU and through his writings.”

Keith McHenry, co-founder of Food Not Bombs, said the United States’ overuses solitary and mass incarceration targeting people of color, far surpassing Europe and other countries, and described his 94 arrests for serving free food to the hungry, including 3 times in which he was tortured and kept for 3 or 4 days in solitary, in the dark in a stress position cage at police headquarters in San Francisco.

Sin Barras and community members read excerpts from Todd Ashker’s “Moving Forward: With Our Fight To End Solitary Confinement [SHU/Ad.-Seg.],” a statement by Dolores Canales of CFASC about her son John Martinez in Pelican Bay SHU 14 years, Sarah Shourd’s “How Solitary Confinement Destroys Women,” and lyrics to “Ballad of Jesse Castillo” by Mark Levy [Copyright 1994 Mark Levy/New Clear Records ASCAP, from 1995 CD Born to be Wired]. Jesse Castillo was framed, incarcerated, and killed by a guard in PBSP SHU. Solitary confinement of youth in Santa Cruz County Juvenile Hall and of adults in Santa Cruz County Jail and Blaine Street Women's Facility Jail, Santa Cruz, were exposed as child abuse and torture that need to end. A woman spoke out about the torture in PBSP SHU of her childhood friend, who used his time to perfect his writing, but at times was denied paper and pencils. She said: “They are killing our raza, our people of color, basta ya, el prison industrial complex!”

Stay tuned for the next SCATESC action on Tuesday, June 23rd. 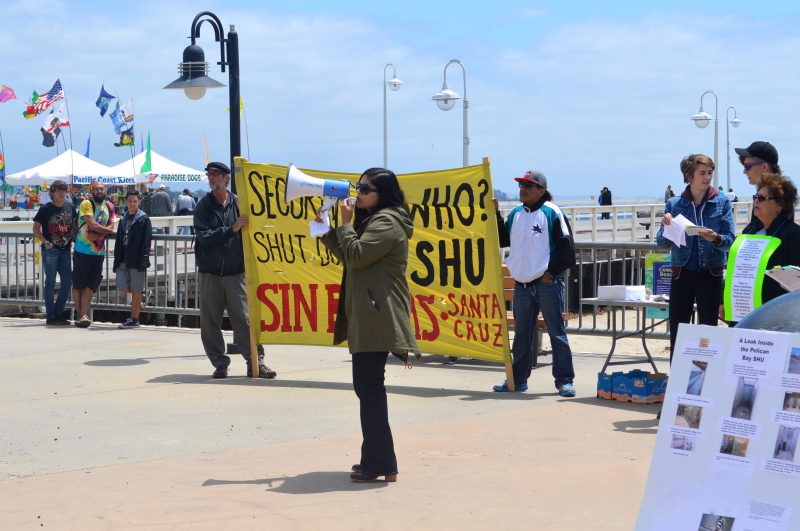 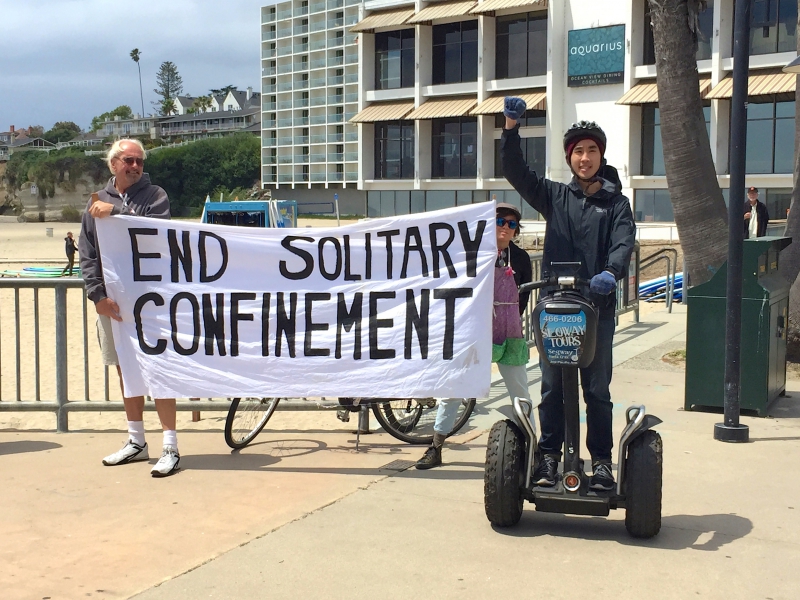 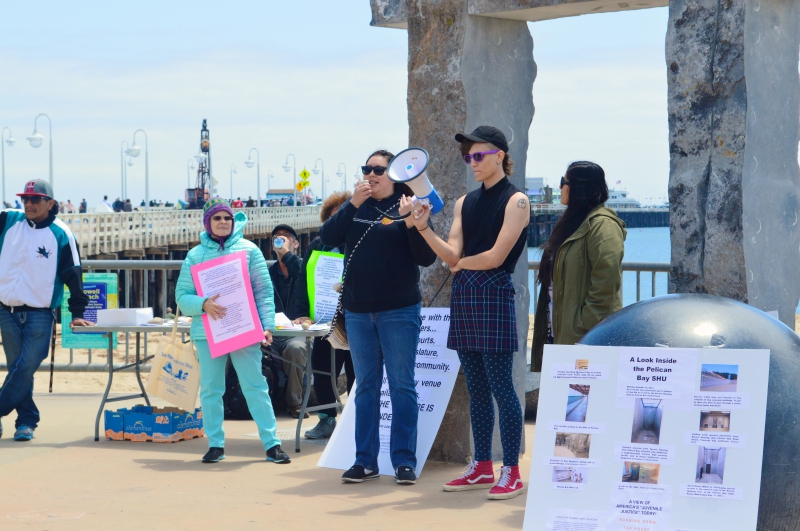 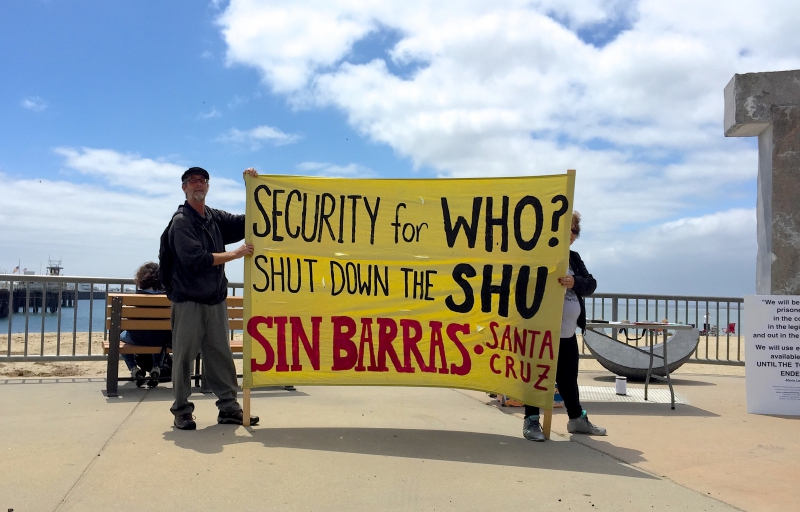 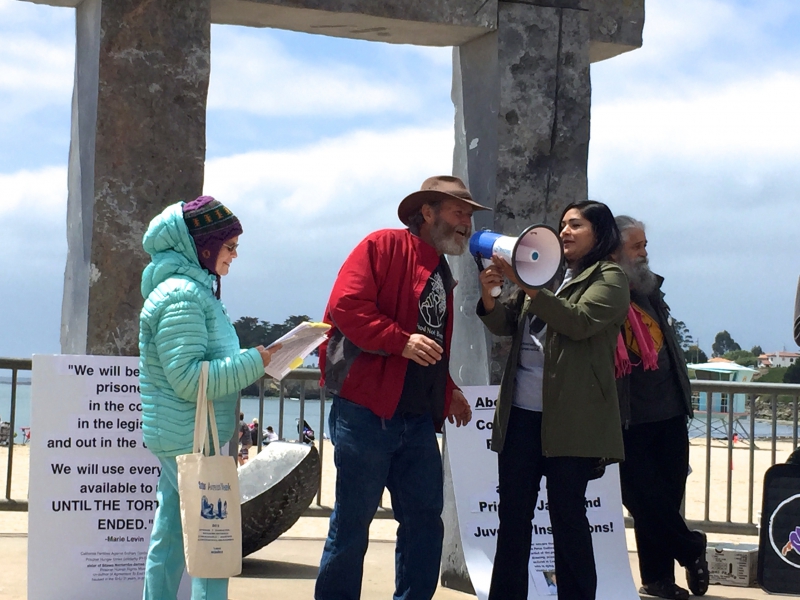 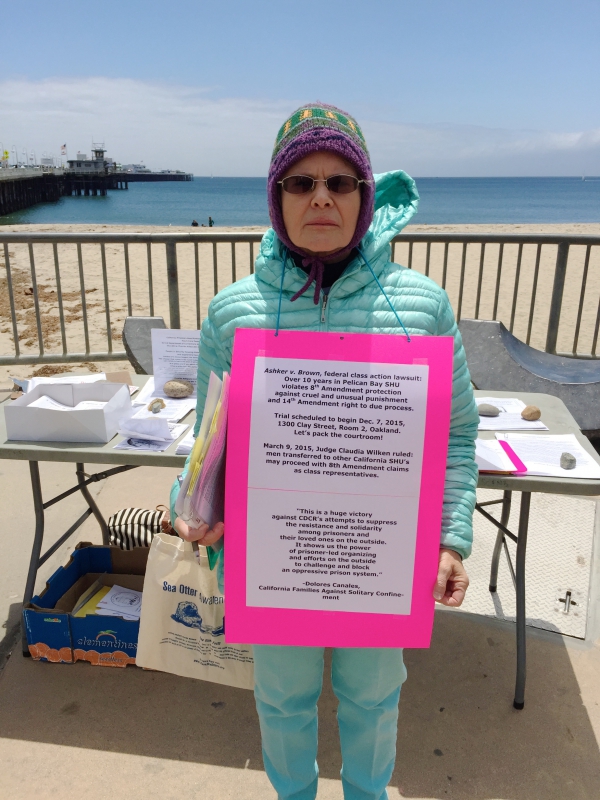 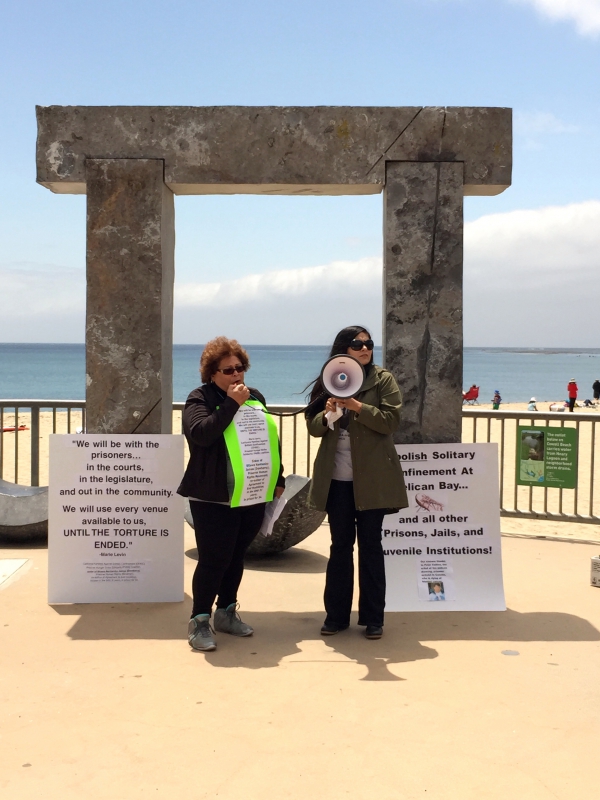 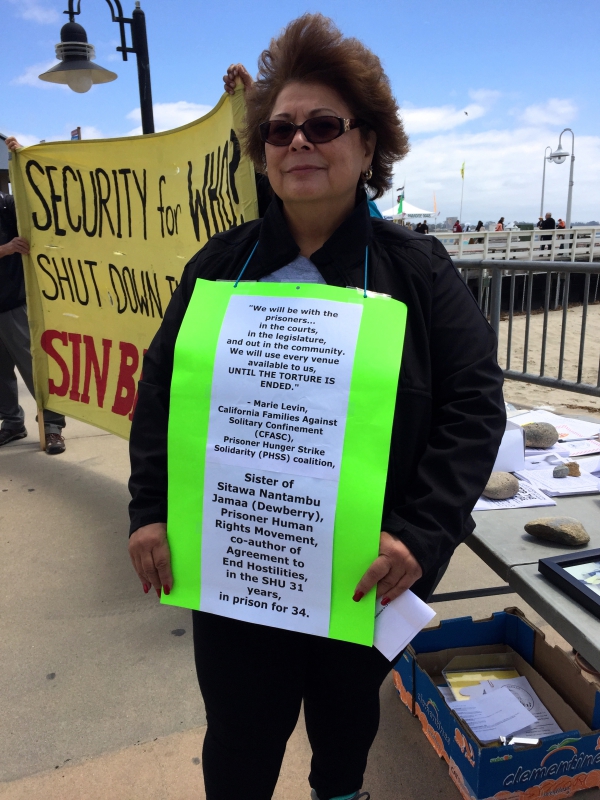 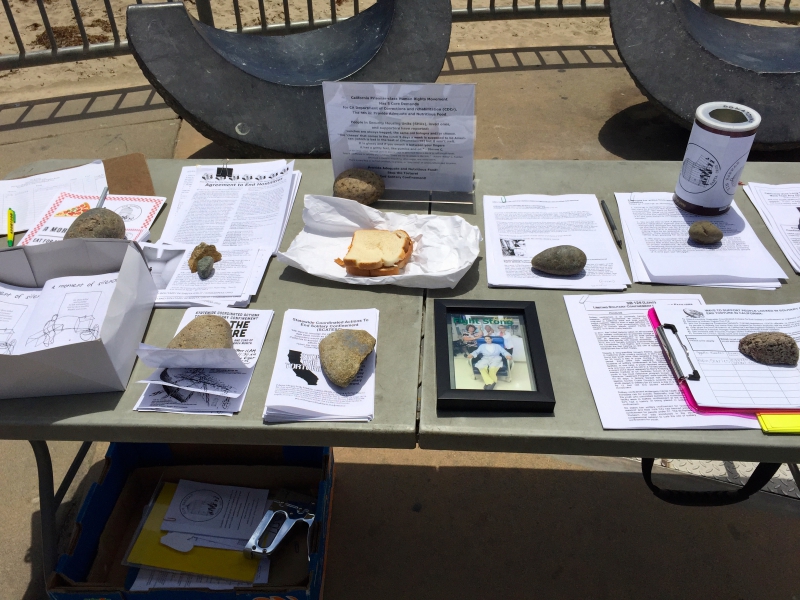 original image (3264x2448)
http://www.prisonerhungerstrikesolidarity....
Add Your Comments
Support Independent Media
We are 100% volunteer and depend on your participation to sustain our efforts!