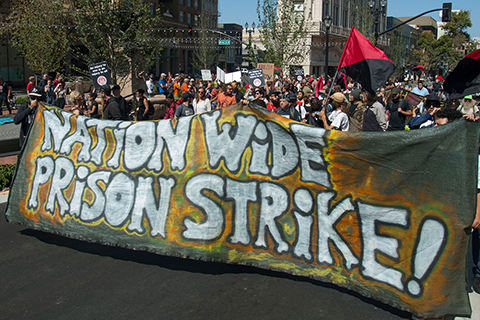 On September 10, over 300 people took part in a march, rally, and demonstration in solidarity with the ongoing Prison Strike happening across US prisons, jails, and detention facilities. People gathered at Latham Square in downtown Oakland where several speakers addressed the crowd. Grabbing banners, flags, and signs, people then took to the streets and marched to several corporations that profit from prison labor.

The first business to be called out was AT&T, and a local speaker discussed how starting in the 1990s, the company began laying off large amounts of unionized workers (members of CWA union) and "replacing" them with prison labor. The march then continued to UPS, where more statements were read. Graffiti and stickers also started to go up at the storefronts of these businesses. The march then headed to Bank of America, where the role of the financial giant was discussed over the sound system and a statement from the Free Alabama Movement was also played. Large amounts of graffiti messages went up on the windows of the bank, the ATM was rendered useless, the sign was broken to read ‘Ban America,’ and several windows were broken. Three people were later arrested.